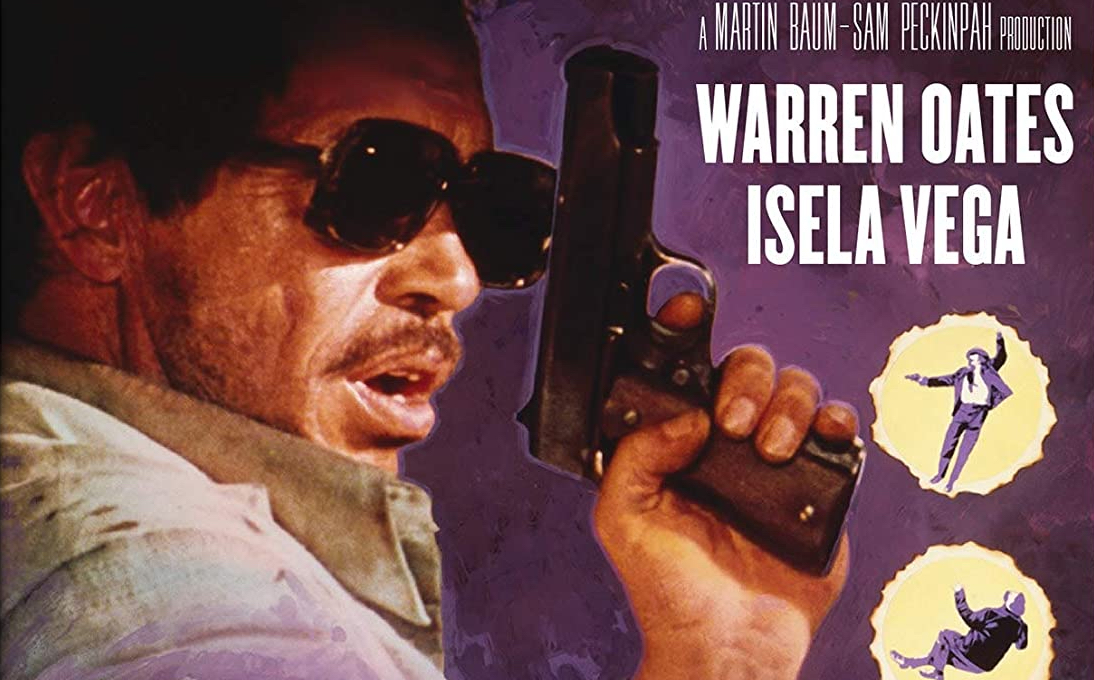 Sam Peckinpah’s underrated masterpiece Bring Me the Head of Alfredo Garcia makes its return to Blu-Ray thanks to Kino Lorber.

To say that Sam Peckinpah is a divisive filmmaker is an understatement.  In many ways, my relationship with Peckinpah mirrors the one that I have with Gaspar Noe.  That is one of extremes.  Everything about Bring Me the Head of Alfredo Garcia has me in love deeply.  This existential violent western and ode to Warren Oates and Peckinpah himself is part ego-driven vanity project and part masterful work of art.

El Jefe’s (Emilio Fernández) young daughter is pregnant.  Alfredo Garcia, Al to his friends, is the father.  El Jefe after torturing his own daughter to find this fact out wants Al’s head.  Through a series of intermediaries, the full-time broke broken-down slob part-time piano player Bennie (Oates) gets the job.  Bennie sees a get-rich-quick scheme.  One that can set him and his sex worker girlfriend Elita (Isela Vega) for life.  Elita knows Al and his whereabouts.

This isn’t a weekend holiday drive to find Al.  The two drive into a hellscape nightmare of violence and tragedy.  Bennie determined to get to his heart of darkness to personally deliver Alfredo Garcia to El Jefe at any cost.

When I say Bennie is a full-time broke broken-down slob, I mean it in the most poetic way possible.  Think of Charles Bukowski’s ruminations taken living form.  Bennie is the Barfly gone off course.  Woke up ten years later surprised as anyone that he is still alive, deep in the heart of Mexico.  Peckinpah photographs Oates the way that Ford photographed Wayne.  There’s mythmaking going on here.

Peckinpah writing both his and Oates legend at the same time.  Oates is the on-screen persona of Peckinpah in this film.  An artist pushed to the edges and fringes of society.  There is both beauty and squalor in this notion for Peckinpah.  The film sees Oates as a dreamer filled with emotions and notions that the next scheme will hit.

Though Peckinpah is too much of a pessimist to allow something to go right.  Oates is Peckinpah or the way that Peckinpah sees himself.  This broken-down entertainer.  Drunk half the time.  Hoping his audience is as drunk as he is.

By this point, Peckinpah had been chewed up and lost so much fighting over films.  At every turn, Oates’s character is beaten and dragged through 50 miles of bad road.  Though Bennie never stops his journey.  He like Peckinpah continues on determined to complete his fool’s errand.

Bennie/Oates is the same sort of man with a code in a place or time where those ideals are literally laughed at.  Oates takes that romantic fatalism in Bennie and makes it soar.  Peckinpah queues in on this and makes it soar.  The moments of Bennie and Elita in the convertible with nothing but dreams and song in the air… Oates plays these without and a hint of sarcasm Peckinpah shoots it with the romanticism you would not expect from the man who directed Straw Dogs.

Though quickly that Sam Peckinpah does come out to play.  Once Kris Kristofferson shows up as a biker, Peckinpah and Oates’s nightmare of machismo, sadism, and hell begins.  Bennie’s journey is into the heart of darkness.  As he deteriorates into madness Bennie begins a dialog with his bounty.

As Bennie begins the final leg of his journey Peckinpah’s Opera of Blood rises to its crescendo.  Bennie doing anything he can to face the man who tasked him but did not have the nerve to find Alfredo Garcia himself.  It isn’t the personal loss Bennie has suffered or the indignities.  For Bennie, it is facing El Jefe for not being man enough to confront Al and kill the man himself.

Bring Me the Head of Alfredo ends as one expects it to.  In a hail of slow-motion bullets.  Though with Warren Oates as his lead there is an extra layer of meaning.  Oates like Peckinpah fought his way through life and demons.  Never so apparent than in this film.  As final moments are like a bold bow by both men.  As Oates was never as good as he was here again and Peckinpah’s films never felt as personal again.

Trigger warning: This film does feature sexual assault and violence towards women.

This 2017 HD Master from a 4K Scan of the Original Camera Negative is a huge leap forward from the original Twilight Time Disc released in 2014.  Compared to the Twilight Time Edition this transfer is sharper, cleaner, the colors have a pop, and the contrast levels are nicer.  Add to the fact that this transfer benefits from improved compression tools makes this an all-around better image and well worth the re-investment into another Disc.  Especially if you’re a fan of the film.

The archival commentary Historians Paul Seydor, Garner Simmons, David Weddle, and Nick Redman is as good as it was when it was released on the original Twilight Time Disc.  Details include Peckinpah’s love of this film, Peckinpah’s own admission it was semi-autobiographical, Peckinpah’s directorial style, how he came onto to project, the director’s hated of Richard Nixon, the director’s attempt to get dual citizenship (USA and Mexico), the infamous white suit Warren Oates through the film, the possible casting of Peter Falk in the Oates role, the complexity of machismo, the nature of revenge in this film and others from Peckinpah, the sexual assault in the film, the culture in central Mexico, the beheading scene and Bennie’s loss, the turn into the gallows’ humor of the piece, the dark nature of the final third, and much more.  This is a great informative track from three who knew Peckinpah and even spent time on set with the man (in the case of Garner).

The second archival Audio Commentary is Redman hosting co-writer/co-producer Gordon Dawson of the film.  The commentary, taken from the Twilight Time release, is a treat as Dawson is in fine form discussing with great revelry his relationship with Peckinpah, the movie, the production, and his life.  Details include the biographical nature of the film, how the terrible experience of Billy the Kid and Pat Garret informed on this production, how Dawson met Peckinpah, terrifying bullying nature of Peckinpah, Peckinpah’s rise from Prop man to eventually writing for Gunsmoke to eventually directing, Dawson’s back and forth with Peckinpah for over a decade and the abuse he endured, his experience on The Wild Bunch which he costumed and also had an acting role in, the relationship between Oates and Peckinpah, the preview screening in Long Beach, the improvision in the film, how they filmed the driving scenes, how the sexual assault written as opposed to how it was directed and evolved, working and the work of Kris Kristofferson, a wild story about Warren Oates filming the graveyard scene, another wild story about Mexican Federales a duffle bag and its contents, the abusive nature of Peckinpah and its lasting effect on his legacy, the specific broken down aesthetic of Peckinpah and how it was accomplished, Dawson’s origins as a child actor, being a working Writer and Producer on TV (his last work was Walker: Texas Ranger), his directing Second Unit for Peckinpah, and much more. Where the first is more of a study of the film itself this is a personal account of the making of the film and the intent by the filmmakers.  Another truly great commentary track.

TRAILERS FROM HELL with Josh Olson (2:08) – Screenwriter Olson gives us a Micro-Commentary on the film.

Image Gallery (7:41) – the video montage with music by composer Jerry Fielding is a gallery of 45 production stills, behind the scenes phones, and poster art.

Rounding out the special features are theatrical trailers for Bring Me the Head of Alfredo Garcia (1:58), Junior Bonner(2:30), Convoy (3:48)

Peckinpah’s masterpiece and ode to Warren Oates has been brought back to life by Kino Lorber.  HIGHEST POSSIBLE RECOMMENDATIONS!!!