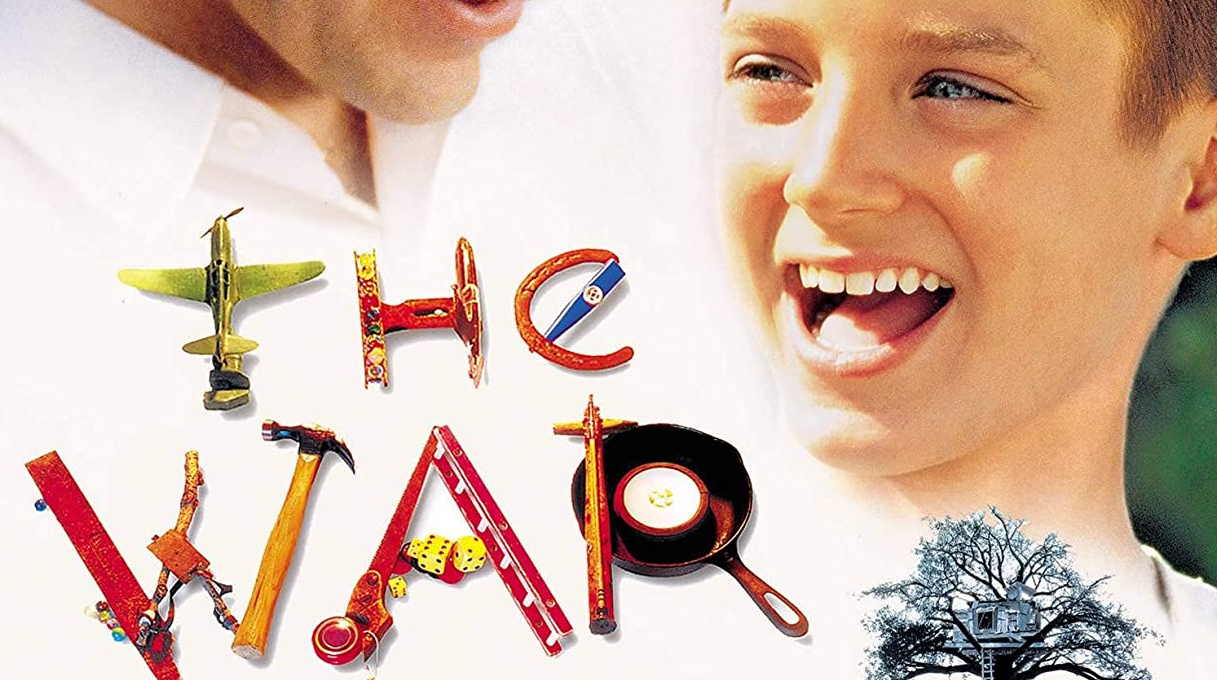 Jon Avnet’s underseen family drama The War makes its debut on Blu-Ray thanks to Kino Lorber.

The War is a rarity now.  A studio-produced big-budget family drama.  One that’s anchored by performances by Elijah Wood and Kevin Costner.

Much like his previous film Fried Green Tomatoes the film is not necessarily tied to a single drama.  The War is a Family Drama, Coming of Age film, War film, Vet film, and much more.  Rather than adhere to some strict sort of dramaturgy dictum the film follows the Simmons family over the single most important summer of their lives.  Stu (Wood) and Lidia (Lexi Randall) and their friends are embroiled in a war with the Lipnikis, a family of bullies.  Stephen (Costner) and Lois (Mare Winningham) are struggling with the loss of their house and Stephen’s continual loss of jobs because of his Vet status.

Avnet brings his uncommon sensitivity and humor to the project.  The film never feels like it’s navel-gazing or too much of a cliché of the era.  The War though awards fodder of the time, still finds a way to go beyond that and create a film where kids are at the center but they’re never cute or twee.  It does help that both Wood and Randall are in top form here as brother and sister.  Both actors go toe to toe with Costner and the rest of the adult cast here.  Their performances feel lived in and rough around the edges the way a pre-teen really is.

One almost feels like the film could have been written by Stephen King if he went light on Bullies.  Though the film does excel at creating an almost action style set up between the two sets of children that culminates in one of the biggest set-pieces involving kids in the last forty years.  The set-piece (no other name to call it) involves a treehouse, fire, smoke grenades, potato guns, and a rickety water tower is straight out of some action film.  Making it all the more harrowing is the expert stunt work and ace editing.

Ultimately, The War is about the damage that the Vietnam war did beyond the haunted Soldiers.  Yes, it does have a Hollywood ending (as much as one that can be tacked on to this type of film) but still remains true to its darker roots.

Kino Lorber has been given a wonderful transfer by Universal.  KL has taken the time and care in transferring it to Blu-Ray.  The image is sharp and handsome.  The colors are warmly reproduced and a healthy amount of grain giving the film a filmic look.

The newly recorded commentary by director Jon Avnet.  The director discusses the production and thematics of the film.  Details include casting of the Lipnicki’s with non-professional actors, working with Kevin Costner, working with Mare Winningham, the topic of PTSD in the film and how it was handled, working with Elijah Wood, shooting in Georgia (in the same county as he shot Fried Green Tomatoes), his almost directing of Friday Night Lights, the stunt work (which had to visually look like children), the problems around production like weather, taking to task a critic who said that a Marble Mine was not true to life (they filmed in a marble mine), everything that was involved with the water tower sequence and location (things like moving the entire structure), the finale between the Lipnikis and the Simmons, and much more.  The track does have a fair amount of silence towards the second half of the film but none-the-less Avnet delivers an informative and fact-filled commentary track.

The second newly recorded commentary is by historians Emma Westwood and Paul Nelson.  The duo recorded together but separate (during COVID).  The Australian Critics discuss Avnet’s film along with comparisons to his debut feature Fried Green Tomatoes (this was his sophomore film).  Details from the commentary include the fairy tale style tone that’s imbued in the film, the cliches of the Vietnam Era dramas (e.g. most of the Oliver Stone filmography of the 80s and 90s), the soundtrack, and how it relates to the Vietnam War based films, Forrest Gump which was released the same year, the evolution of the Vietnam Vet character, the evolution of the Vietnam films, the producing career and eventually directing career of Jon Avnet, a nice side conversation about DeNiro and Pacino starring in films together (because Righteous Kill, an Avent directed film), Avnet’s varied career in Theatre and TV, the career of Elijah Wood, the career of Lucas Black, the career of Lexi Randall, the crazy third act, and much more.  The duo’s commentary is a lively fun affair with a lot of information about the production and the director.

The War is an undiscovered gem of a family drama.  One that Kino Lorber has given us a great edition of.  Recommended!!!