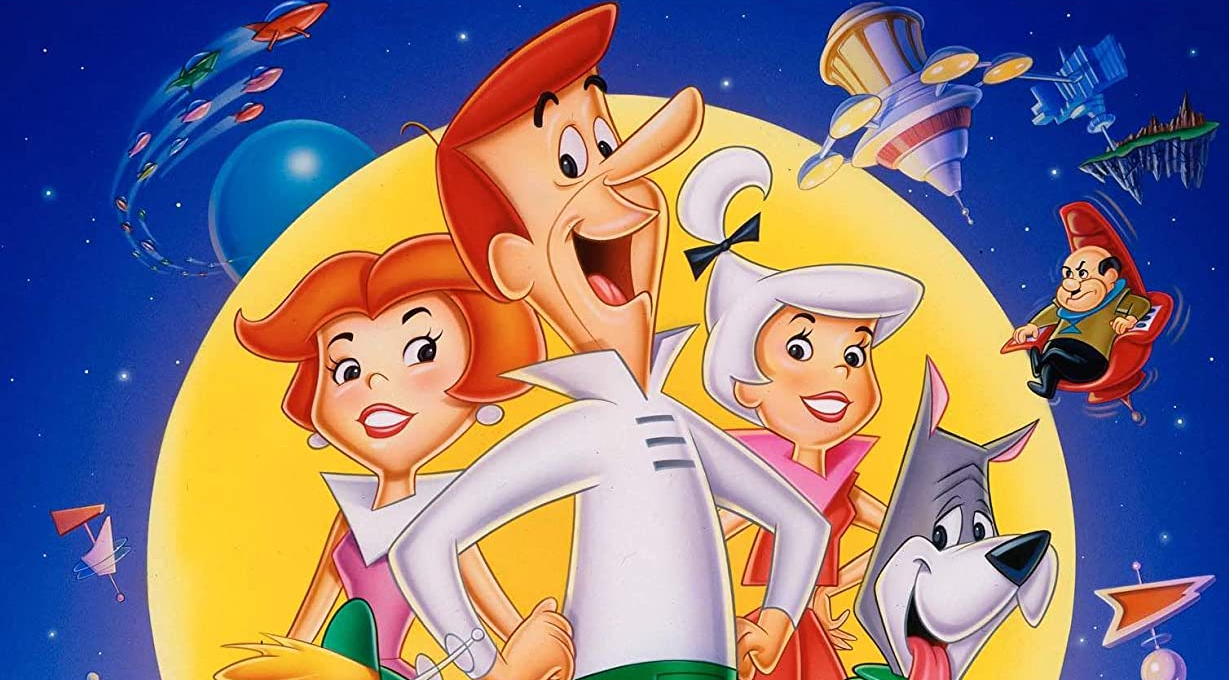 Jetsons: The Movie comes to Blu-Ray thanks to Kino Lorber with new special features.

The Jetsons were literally The Flintstones in space.  That still remains true in this movie that feels more like an extended pilot to relaunch the animated series.

A disaster at one of Spacely Sprockets plants has Cosmo Spacely looking for someone dumb enough to take a “promotion” and in essence, become the fall guy.  Enter George Jetson.  Promoted and moving his family Jane, Judy, Elroy, and Astro to the Orbiting-Ore Asteroid aka a long way from home.  Of course, George and the gang finds out what’s been happening at the sprocket factory.  Something that involves creatures more twee than Ewoks.  Don’t worry all ends well and we’re back where we started back on Earth with George and Family in tow.

This Hannah Barbera production is actually directed by William Hanna and Joseph Barbera.  One would expect something special, but everything feels routine.  Hence the Pilot or multi-arc story episodic feel.  There are literally no consequences to anything in the film.  Everything gets tumbled into a dramatic whirlwind when George packs the family to the Asteroid but that’s it.  There isn’t really anything else to it.    Thought that is not to say the film isn’t without its charms.

The film’s best moment comes midway through when Judy and her paramour Apollo have a full-on musical number.  It isn’t the music, standard pop from 80s Teen Superstar Tiffany, it’s the animation.  Hanna and Barbera go full expressionistic with a beautifully created collage of imagery and color.  It’s almost Fantastia-esque in its execution and the highlight of the film.

The newly recorded commentary by Historian Lee Gambin beginning with the Opening Universal 75th Anniversary Logo gives plenty of information about this animated film.  Details include the origins of the animated film beginning as a live-action adaptation that turned, the career of George O’Hanlon and his passing, the drama surrounding recasting Judy Jetson with Tiffany, the influence of the various Jetsons TV Episodes and TV Movies on this film, his personal history with Hanna Barbera (which are very similar to many), the career of Peggy Singleton, the film’s ecology message, the very awkward Rap section and how this was a staple of early 90s cartoons, the Tiffany songs, the characters of George, Judy, Jane, Elroy, and others, the history of Hanna Barbera TV Movies, The Jetsons as a TV Series, the critical reception of the film at the time, John Debney’s score, and more.  Gambin’s commentary comes fast and furious with the information on the production, the legendary Hanna Barbera series and more.  If you’re a fan of the film you’ll not want to miss this commentary.

Jetsons: the Movie – interview with Jeff Bergman (54:13) – is an all-new audio interview with the voice actor that performed as George Jetson / Mr. Spacely / Board Member.  The actor is interviewed by Lee Gambin.  Gambin prompts Bergman his work in 1990 (which included his work in Gremlins 2) which was very busy.  Details include the passing of Mel Blanc, cast in Tiny Tunes, being directed by Chuck Jones, a great story about stalking and meeting Mel Blanc, his thoughts on George O’Hanlon, recording the movie and meeting Bill Hanna for the first time, getting to meet Penny Singleton (normally voice actors don’t record together), the transition from fan/geek to the actual working voice actor, and much more.  The two definitely geek out about voice work, animation of the era, and earlier.  The interview is basically a second commentary, albeit a micro one.  The Image of the Jetsons: The Movie logo appears during the entirety of the audio interview.

Jetsons: The Movie is for fans of the show or nostalgia folks.

Kino Lorber’s Blu-Ray of Jetsons: The Movie is out February 16th