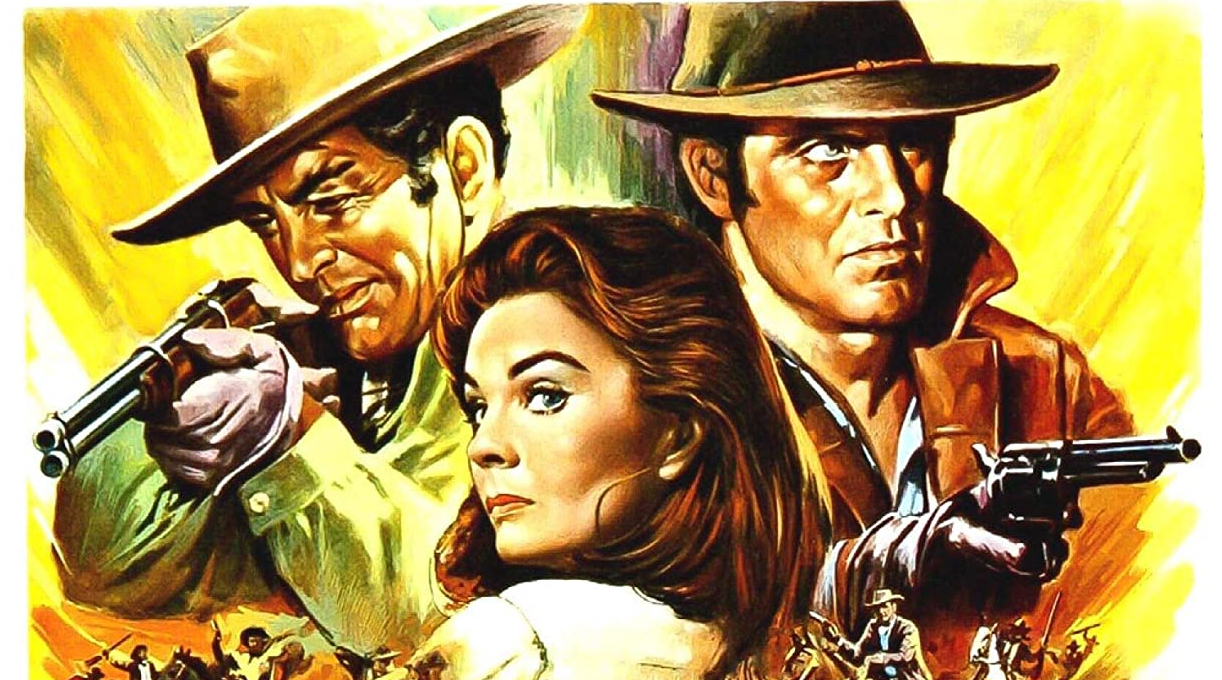 George Peppard faces off against an evil Dean Martin in this gem of a late 60’s Western.  Brought to Blu-Ray by Kino Lorber.

This is one lean and mean western.  Based on the novel, The Man in Black by Marvin H. Albert (who co-wrote the screenplay), Arnold Laven’s film pits George Peppard against a truly evil Dean Martin.  The results are a damn fine western that is sure to make fans out of anyone that hasn’t seen it.

Retired Lawmen Hickman (John MacIntire) and Dolan (Peppard) are ambushed outside the Jericho.  What they do not understand is they have stepped into the middle of a hostile takeover by Alex Flood (Martin).  Flood, with his recent hanging, owns most of the town’s interests, or as he likes to say; “Fifty-one percent of everything in town.”.   As the two men enter the town they can see that nothing good will come of the sort of brute unlawfulness that Flood had instilled.  The townspeople either too scared or ill-equipped to handle a man like Flood, it is only a matter of time until Dolan is conscripted into this mess.  It is only a matter of time until Flood and Dolan face off.

Director Levan’s film is as terse and mean as a western of this era (that didn’t come from Spain or Italy). Though not as morally complex as other westerns, we know who’s good and who’s bad in this one, the film manages to take the Peppard and Martin characters to their natural conclusion in rousing fashion. Levan uses both actors to their strengths.  Peppard that cool disposition that he was famous for.  Martin an air of menace that he was rarely allowed to portray on screen.

The film’s standout is its action set pieces.  The centerpiece is the fight between Peppard and Slim Pickens.  Now one would think that a fight with Slim Pickens would be funny but it is anything but.  The fight is dirty, hard, and shockingly violent.  Levan’s work here is elevated always siding on the harder side of the violence giving it a much more modern approach that gives Rough Night in Jericho its “rough”.

The result is a western that’s lean and will reward viewers.  Rough Night in Jericho may be 50-miles of bad road for its characters but it’s a hell of a lot of fun for its audience.

Kino Lorber continues to work its magic on the Universal Catalog.  There is no evidence to prove it but, the transfer appears to be newly mastered or at the very least taken from a newer transfer.  Time and care have been taken with Rough Night in Jericho.  The Techniscope widescreen image sharp without the loss of grain or any DNR.  The image is handsome and with a beautiful patina of grain.  Though the grain structure never distracts but rather enhances the film’s gritty aesthetics.  The result is an image that feels like a fresh struct archival print.

The newly recorded commentary by Samm Deighan is an informative delight.  The critic dissects this late-era studio produced Western that toes the line between Classics of the genre and the Neo Deconstruction of the Western that was already beginning.  Details include the work of author/co-screenwriter Marvin H. Albert, co-screenwriter Sydney Boehm, the landscape of the Western genre in the late 1960s, the interesting career of Arnold Levan, the status of Universal as a company and what they were producing, Levan’s creation of The Rifleman (with Sam Peckinpah’s assistance) and other TV Shows he produced and directed, the career at the time of Dean Martin, a great dissection of the career and character work of Jean Simmons (and the shittiest deal she got after being preyed upon by Howard Hughes), discussion of George Peppard’s career and the character work, and much more.  Like her previous commentary for Backlash, Deighan gives us a deep dive into the actors, the genre, and filmmakers of Rough Night at Jericho.  It’s a definite must-listen.

KL Studio Classics Blu-Ray of Rough Night in Jericho is out January 5th!