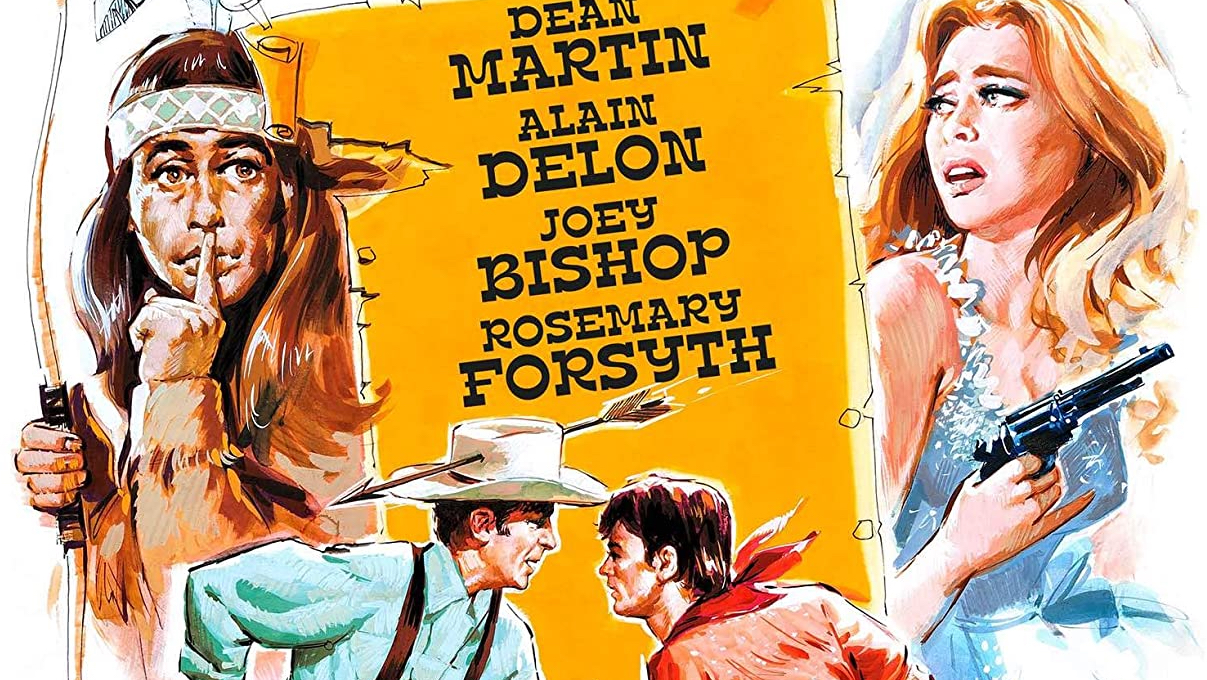 Alain Delon and Dean Martin team up for this fun screwball comedy western.  Kino Lorber has brought this late 60s gem to Blu-Ray.

Texas Across the River is smarter than you may think it is.  This Western Comedy Romp has Delon and Martin in top form.  Though the Joey Bishop role may have some people very upset.

Don Andrea Baldazar, El Duce de la Casala (Delon) on his wedding day is besieged by Union Calvary soldiers. Why one asks?  His bride-to-be Phoebe Ann Naylor (Rosemary Forsyth) was betrothed to another.  After an accident Baldazar finds himself on the run to Texas where he will meet Phoebe.  On his way, he crosses paths with a pair of conman Sam Hollis (Martin) and his Native American “sidekick” Kronk (Bishop in full-on brownface).  Now, dubbed Baldy by Hollis the two must face not only the Calvary but a vexed Comanche Tribe Iron Shirt (played by Lebanese acting great Michael Ansara).  Everything ends up in screwball comedy fashion with a big old who’s who and what’s what showdown.  Don’t worry like all comedies it all ends happily ever after (at least for the white people).

Texas Across the River isn’t a troubling film though my plot description would have you thinking otherwise.  In fact, the film may not be using those conventions lazily but rather adroitly commenting on them.  The use of someone like Ansara who famously played Cochise in the long-running western series Broken Arrow would have you thinking they’re actually satirizing Westerns using “brownface”, such as with the casting of Bishop as the much more competent of the conman duo.  Though one wishes that they had cast Native American Actors of the era in these roles, even in our current era that seems like an impossibility.

That said if taken on its own terms the film is a charming delight that revels in the kind of misagosh comedic tomfoolery of the era.  If one loves things like The Wrecking Crew or A Shot in the Dark or The Pink Panther one will certainly find much to be entertained by in this film.  Handsomely shot in Technicolor widescreen the film never misses a chance to linger on the beauty that is Alain Delon.  What film of the era wouldn’t?  Delon may have been the best looking male or female of the era.

Speaking of Delon, the actor finds himself at home in his charming and comedic role and the perfect foil to Martin’s gruff but charismatic persona.  Both men find themselves to be perfect coconspirators in his comedic endeavor.  Though it is Bishop that steals the show as the stoic and almost supernaturally accurate.

In the end, Texas Across the River is a nimble light on its feet comedy that fans of 60s comedies will find much to love in.

How wonderful is it that we’re finally getting these late-era widescreen Universal Movies in High Definition?  This is a great example of how to bring a colorful entry to home video properly.  Though the notes do not indicate, the transfer appears to be newly mastered or at the very least taken from a newer transfer.  The colors are beautiful.  The image sharp without the loss of grain or any noise reduction.  The result is an image that feels more film-like than scrubbed over and processed.

The newly recorded commentary by Samm Deighan is the perfect complement to her commentary on Rough Night in Jericho.  Deighan gives us the informative details that we come to expect from her commentaries.  Details include the discussion of how this film was developed and produced, the comedic career (and some of his serious career) of Peter Graves, the careers of all (and I do mean all) the supporting actors in the film, a deep dive into the career of Alain Delon, the career (and Blacklisting) of director Michael Gordon (related to Joseph Gordon-Levitt), Joey Bishop and his specific role as a Native American (as a white man), the use of “brownface”, a small discussion of The Rat Pack and what they meant at this time, the career of Dean Martin including his time as “Martin + Lewis”, the career Joey Bishop, the history of stereotyping of the Native American in Hollywood, the interesting and fascinating career of Tina Aumont, and more.  Deighan gives us another winning track that entertains and enlightens.  Again, if you love this film you must listen to her track.

Texas Across the River is a comedic delight and well worth discovering.  Recommended.

KL Studio Classics’ Blu-Ray of Texas Across the River is out January 5th!