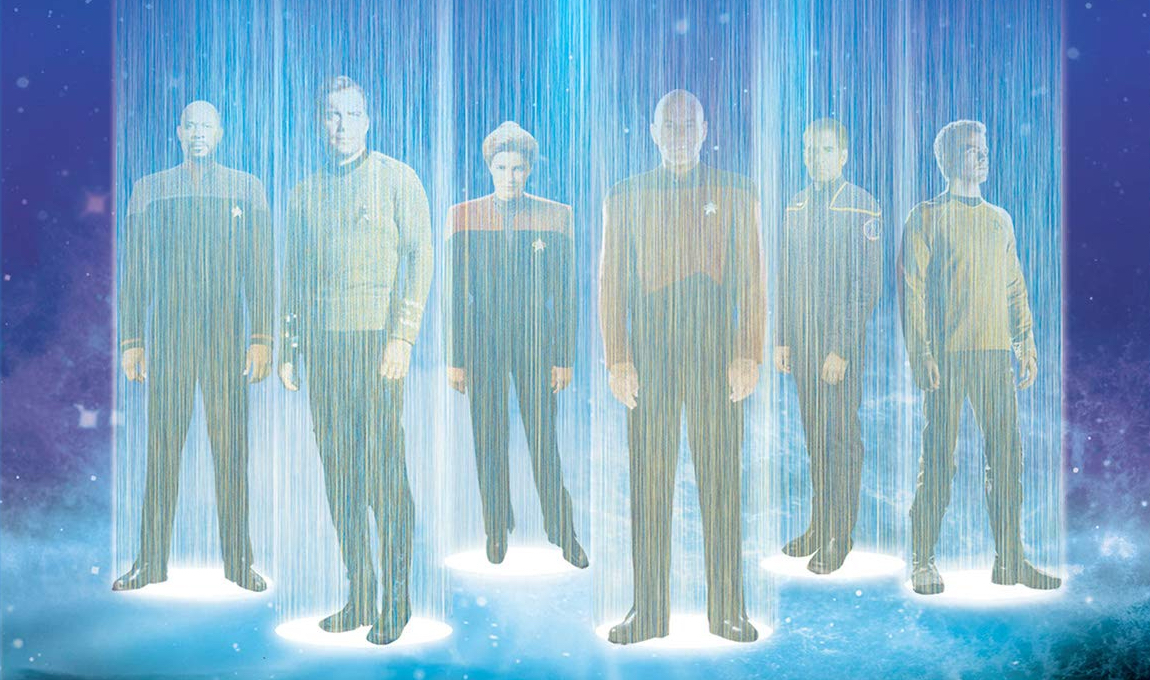 Shout Factory’s Blu-Ray Box Set for the William Shatner’s highly entertaining series of Documentaries about Star Trek’s Captains, Series, and Fans is a gold mine for any Trekker.

Shatner guides us through a rare journey.  Playing a Captain in the Star Trek universe.  Shatner, Sir Patrick Stewart, Avery Brooks, Kate Mulgrew, Scott Bakula, and Chris Pine discuss with Shatner their experiences of getting the job, the job, and the aftermath of playing a Captain.  Everyone is delightfully charming, especially Avery Brooks who’s on his own wavelength.  The Captains though about the other actors finds a way to be about Shatner and his tempestuous relationship with the massiveness of Star Trek as a pop culture phenomenon.

The Captains Close Up

Almost an extended version of The Captains.  A limited TV Series with each of the episodes focusing on a specific Actor/Captain.  The best episode is the one focusing on Kate Mulgrew.  Mulgrew talks with some honest about the challenges that she faced not only as Captain Janeway but also as an actress and a woman from her early life.  Of course, the most delightful episode is Avery Brooks as one finally has a chance to see that Shatner and Brooks have a deeply personal relationship albeit a prickly one. Both Stewart’s and Backula’s episodes are fun and informative giving us some pretty great moments.

Chaos on the Bridge

The most entertaining of the documentaries.  The making of Star Trek: The Next Generation with all of the politics, the shenanigans, bullshit, arrogance, ego, and so much more.  The unfiltered nature and a big cast of characters that come to talk about the making of the series.  There’s a lot of anger, hilarious so, and a bunch of petty people talking about the almost collapse of a series.  How from that calamity great writers, actors, producers begin to pull it all together to create something truly fantastic.  In the center of it all… Shatner having a great time with people regaling him with stories from the trenches. Any fan of Trek, even those people that aren’t, are going to find some of the stories truly laugh-out-loud funny and fascinating.  Especially, coming from these people that many Trek fans have come to know.

Shanter continues his exploration of Trek with a documentary about fandom in all its shapes and forms.  Similar to the Trekkies series, this very much is a fan-friendly film.  Never once do you ever feel they’re being condescending towards the Trek fans or fandom in general.  Rather Shatner takes a back seat (as much as he can) to fandom and fans of the various types in Trek.  Get a Life, named after the infamous line of Shatner’s (and the SNL Skit that made it famous, and appears at the opening of the film).  The doc feels like Shatner’s continue mending and also interest in the various people who are fans of the series.

Each of the films are housed on a single disc.  This allows for an extremely health bit-rate.  Which translates to a robust and sharp image.

DISC ONE: THE CAPTAINS

DISC THREE: CHAOS ON THE BRIDGE

DISC FOUR: GET A LIFE

The Making of the Captains (11:02) – The making-of shows the how’s and why’s of The Captains coming together and why it was important to William Shatner.

Still Kicking (47:03) – William Shatner, Christopher Plummer, a Stage, two chairs, and amazing conversation.  Old friends, semi-rivals, compatriots of the Canadian Stage, and Radio Dramas regaling us with stories that have to be a part legend and part truth.  The show perfectly allows these two titans of acting to discuss acting, mentors, their contemporaries, the Stage, Radio, Drinking, Good Times, all done with the flair that both Plummer and Shatner have.  Of course, they eventually get to Star Trek and their work in Star Trek VI: The Undiscovered Country.  There is too much to discuss and to spoil including the reason why Shatner took over for Plummer for a performance of Henry V.  I could have watched three hours of this!

Shatner The Firefighter (1:15) – Shatner recounts how a fire on the stage where Star Trek III: The Search for Spock’s sets were being built could endanger his schedule and work on TJ Hooker.

When The Wall Came Down (1:41) – is a discussion of when Desilu (where Star Trek was produced) and Paramount merged.

Ponder The Mystery Music Video (3:37) – Cannot be described just has to be experienced.  Literally, as though Bob Dylan grew up to be a movie star after his motorcycle accident and decided to go back to music and picked up right where he left off.  Yes, it’s that strange and beautiful and hilarious and sometimes sincere.  In a word; SHATNER!

Shatner & The Fans (3:03) – an extended look at Shatner interacting with Star Trek Fans.

The Jue Family (4:34) – A look at a family that takes Star Trek very, very, very seriously.

Fannadicts Sizzle (5:05) – A sizzle reel for what would eventually turn out to be Get A Life.  A lot of the footage in this sizzle reel features largely in the eventual documentary.

Peter And Charlotte (1:31) – A look at a mother and son going to their first convention.

Dr. Scott Richards (3:03) – An extended conversation with the Psychologist that showed up in Get a Life.  Richards discusses the clan of fandom and why people connect.

The Captains Collection is a required purchase for any Trek Fan.  HIGHEST POSSIBLE RECOMMENDATIONS!!!