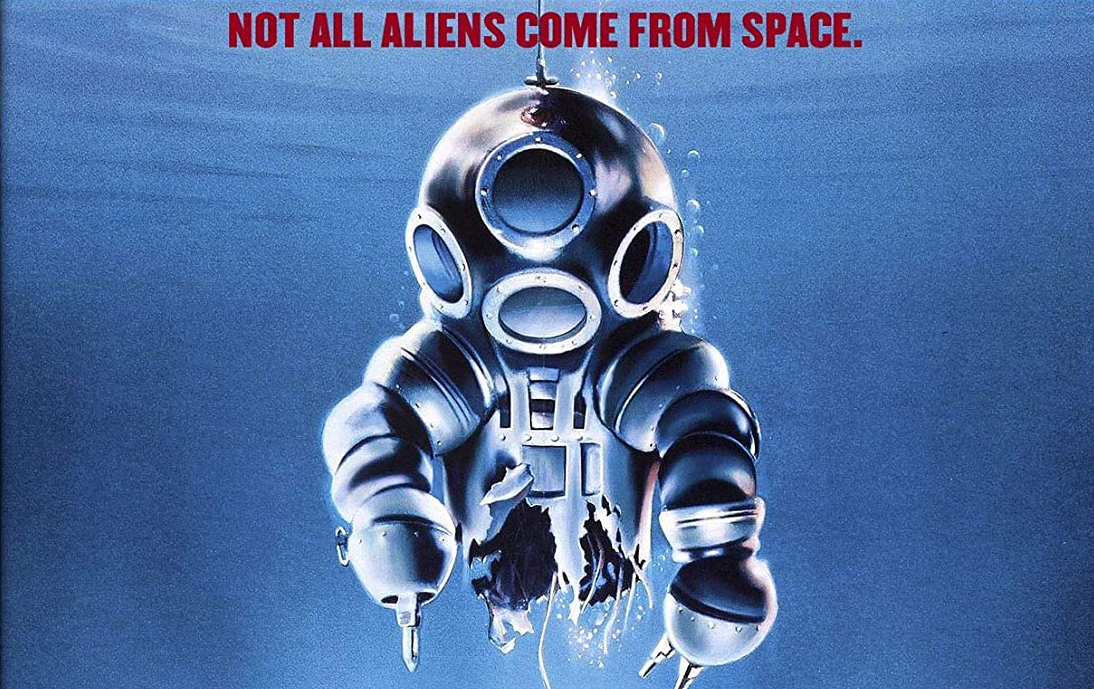 Sean Cunningham’s underwater epic Deep Star Six finally makes it to High Definition.  Kino Lorber has armed the Blu-Ray with a beautiful transfer and a ton of extras.

At the bottom of the Ocean a Naval research facility a group of scientists and engineers while getting the ocean floor ready for a Missile Base, they awaken something.  Something sinister, something angry.  That something begins to wreak havoc on this Research facility and its inhabitants.

Cunningham’s film is a low budget cult oddity.  The film spends more time on the foils of the crew than the actual monster attacking.  In fact, the monster only kills two people. Most of the deaths come from the crew’s idiocy and irresponsible work ethics.  Deep Star Six is more about the worst day at a bad workplace that a giant sea monster happens to be awoken.

The cast is mostly duds with the exception of the great-great-great Miguel Ferrer who appears to be having the time of his life as the squirmy tech Snyder.  Ferrer understands that as the film goes on the more overwrought and hammier, he must become.  By the end and his fate, Ferrer is at a Spinal Tap-11 which may be the most glorious thing in the entire picture.

Deep Star Six is just a bunch of fun B-Movie malarky that will have you yelling at the screen no matter who you watch it with or how you watch it.

Deep Star Six comes to Blu-Ray with a solid transfer that is a huge uptick from the original DVD release. The Blu-Ray image is sharp and pleasing to the eye.

The archival Commentary from Cunningham and Isaac is a little lean.  Recorded during the early days of DVDs the track is a bit parse with large sections of the film playing without comment.  The duo gets better as the film goes along and their comments hint at a very tough shoot they don’t really elaborate on.  The track does suffer from the dreaded “describing” what’s on screen.

The Newly recorded Commentary by Lewis Abernathy and Geof Miller is a joy.  Abernathy and Miller are in fine form discussing the film with enthusiasm and wit.  The writing duo begins with a discussing how they were sued by Warner Brothers and a Famous Author of a Shark Book, recording the commentary during COVID, and much more.  Both men are constantly making each other laugh watching what’s unfolding on-screen and dishing some good anecdotes.  The guys discuss The Abyss, Leviathan, writing and being fired (right before the strike), a conversation about typewriters (which is hilarious), taking the piss on the miniature effects, their own plot contrivances, how the production was rushed and the results of that, knocking the Dustin Hoffman classic Sphere, their dialog and technobabble, the nickname they gave to the monster, and generally really take the piss on the movie in the best way possible.  This is definitely the track to listen to as it’s as entertaining as the film.

The third and final commentary is actually a select scene commentary by composer Harry Manfredini with select isolated sections of his score.  Hosted by Michael Felsher this Interview/Score is a great addition.  Manfredini discusses how he came to work with Cunningham, the score and the origins of the sound, and much more. The score selections themselves are great and appear to be the entire score though not necessarily synced with the picture.

From the Deep (21:17) – featuring interviews with Creature Effects & Special Make-up Designer Mark Shostrom, Creature Supervisor Greg Nicotero and Creature Artist Robert Kurtzman.  This newly filmed featurette has Shostrom and the KNB gentlemen discussing the creation of the creature, featured very limitedly in Deep Star Six.  The men discuss how they all go involved with the film at the time where they were all involved with Evil Dead 2 and Phantasm 2.  How Chris Wallis was involved, how they were recommended based on the work From Beyond, just how big the monster was, their interesting testing of the effects, and more.  They have some great b-roll footage and behind the scenes photos.

The Survivors (16:43) – featuring interviews with Actors Greg Evigan and Nancy Everhard.  The newly filmed featurette with lead actors Evigan and Everhard discussing the making of the film.  The two discuss Cunningham’s directorial style, their respective careers before the film, the other actors, improvising technobabble on the set (and saying, “Close the Flemage!”), the work to get the creature work, and more.  They have some great b-roll footage and behind the scenes photos.

Water Damage (12:42) – featuring an Interview with Stunt Coordinator Kane Hodder.  The newly filmed featurette has the only real Jason Vorhees aka Kane Hodder discussing not just Deep Star Six and his work there but what he does as an actual Stunt Coordinator.  Anecdotes include, how he came to be to the Stunt Coordinator on this film, his work beginning with Cunningham on House and other films, the difficulty with filming stunts in water with actors, and more.

Extended Vintage Interview Clips (8:27) – featuring various cast and crew including Sean Cunningham, Greg Evigan, Nancy Everhard, Nia Peeples, Miguel Ferrer, and more.  Most are filmed on set but some are filmed after production.

Behind-the-Scenes Footage (4:10) – is the raw b-roll footage (Manfredini’s score accompanying the video) seen in the various interviews is here uncut.  It’s great look at the creature effects being put together, the actors working on scenes underwater, and more.

Original EPK (3:36) – is a great cheesy of the era making-of/EPK that you have seen on HBO or Showtime to hype you for the coming film.  The best part of this archival featurette… the voice over NOT done by Don Lafontaine aka the trailer guy.  Ironically, though Lafontaine does do the Trailer included here.

Deep Star Six is B-Movie fun.  Kino Lorber has filled it to the gills with special features.  HIGHEST POSSIBLE RECOMMENDATIONS.

Kino Lorber’s Blu-Ray of Deep Star Six is out now.