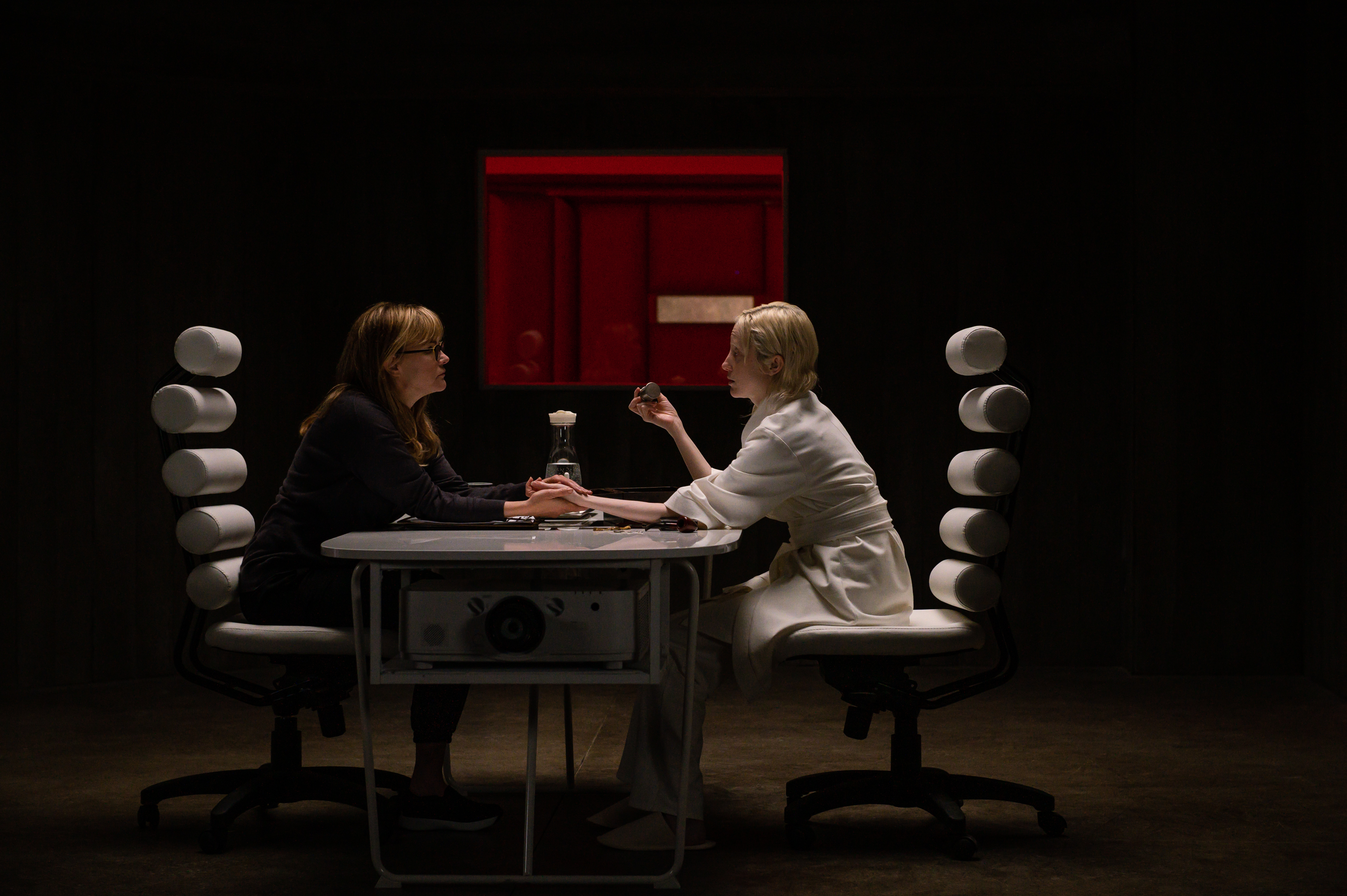 Possessor is not for everyone. For those that are attuned with its specific wavelength it is a spectacular singular vision.  A vision of the future where assassins inhabit your body to murder your loved ones all in the name of money and power.  Where nothing matters more than the almighty dollar even, you’re the safety of your employees.

Tasya Vos (Andrea Riseborough) is one of the best operators in the business.  Her business; assassination.  Her employers a secretive coporation hired by the wealthy and other conglomerates when they are wanting to disrupt business or their lives.  As her newest job ends Tasya shows signs of fatigue and a mental break seems very likely.  Her Employer (Jennifer Jason Leigh) has no empathy for Tasya as the biggest job of the Company’s history has come up.

The job; inhabit Colin (Christopher Abbott), the mentally unstable boyfriend of Ava (Tuppence Middleton), the daughter of a billionaire tech magnate (Sean Bean). Kill them in what looks like a mental break to cede power to an unseen brother.  Tasya takes the job and begins her slow descent into hell with her boss pushing her over the precipice with a hyena’s smile.

From the moment we meet Tasya, after the expertly crafted opening moments, we can see she has gone over the requisite “last job” a long time ago.  Riseborough is next-level good capturing the disassociation of Tasya.  Even though Riseborough has a small amount of screen time she casts a large shadow over the entire film.  Her haunted, hallowed out work in the moments we see her with her son and her ex-husband is quietly heartbreaking and uncomfortable.  The moments are small but Riseborough has become an expert in this type of work, etching a character quickly.

Credit also must be given to Christopher Abbott as his work is as much a key to Possessor’s success as Riseborough’s.  There is a subtly femininity to his work that sells that someone has inhabited his body.  As the film’s narrative contorts and twists into a labyrinthian maze of identity, Abbott is front and center not doing an imitation of Riseborough’s work but rather an interpretation.

Many will point to these expertly crafted set pieces with gore as either irresponsible or just ‘cool’.  Which is beside the point, in fact, quite the opposite.  Possessor’s FX isn’t just for the sake of the work.  The visual design, specifically the Makeup FX work, is not simply shallow beauty but gives contextual layers to Cronenberg’s movie.  Possessor uses the violence it displays, with the detached precision of a medical video, to create the hefty toll Tasya’s work takes on her.  These assassinations are not simply quick cuts and flashy.  Cronenberg lingers on the victims and the detritus of their attack.

The camera never shies away from the viscera of violence being depicted.  This isn’t merely FX for FX’s sake but showing the aftermath of violence.  The opening moments as Taysa inhabits a dancer to find her target and kill him with his own steak knife should give people an understanding of how far this film will go.  Neon, Possessor’s distributor, has sided rightly by not cutting any of the film to get an R-Rating.  Rather releasing the film uncut and unrated allows Cronenberg’s movie to never be salacious.  In fact, allowing the director’s vision to be put to screen unscathed is quite responsible.  The violence is never sexualized or romanticized.  Possessor is as responsible for the violence it portrays on screen as any film of recent memory.

Writer/Director Brandon Cronenberg brings a vision that is truly dystopic in its anesthetic cleanness and verisimilitude.  The production design in Possessor is oppressive in a way that is a physical manifestation of Tasya’s mental stasis and additionally predictive of the way that our near future will be designed.   Working with cinematographer Karim Hussain and production designer Rupert Lazarus the trio creates a vision of the world five minutes from now.  Where corridors, halls, and even streets are all designed to ensure you are never out of range of a being spied upon.  The film has a tactile realism that runs throughout.  There is a walkthrough in a workspace mid-film that is quietly more confident about its world-building than anything seen in 2020.

Possessor is a masterpiece of style, tone, and visuals.  A truly haunting and cynical view of where our world is headed.  One where Corporations deal in murder to cede power the same way governments do.  Though, themes aside, it is Possessor’s haunting final moments that will etch it into the Patheon of great dystopian science fiction and horror. Its final moments as harsh an indictment of our circle of violence as anything of recent memory.  Possessor is designed to shock and provoke.  That’s its power.

Possessor is in Theaters October 2nd.