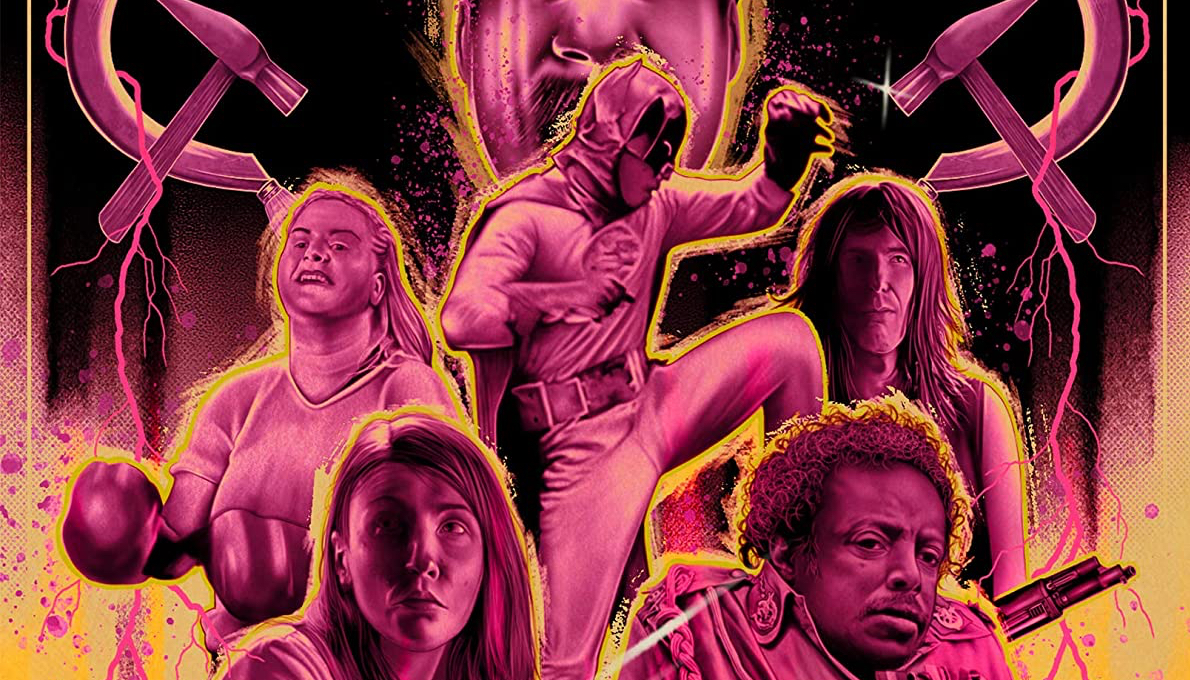 A truly undefinable film, Jesus Shows You the Way to the Highway makes its Blu-Ray debut thanks to Arrow Video.  Arrow has packed a bevy of great special features including Crumbs the first feature film by director Miguel Llansó.

Jesus Shows You the Way to the Highway

A sort of DIY Inception by the way of Eternal Sunshine of the Spotless Mind is the only way that this reviewer can aptly describe Writer/Director Miguel Llansó undefinable film.  Part Romance, Part Political Thriller, Part Theological treaties, Part Kung-Fu Epic, Part Quest film, and more Llansó’s film is a heady brew of many disparate parts that work in spite of itself.

The year is 2035.  CIA Agent DT Gagano (Daniel Tadesse) and his partner Palmer (Agustin Mateo) go into Psychobook, a Social Media VR system, to destroy a computer virus called the “Soviet Union”.  Soviet Union taking the shape of Stalin (with an Irish brogue no less).  Though this is only a trap to take Gagano prisoner.  A trap that there is no escape from.  Or is there?

Llansó’s film is as slippery as it sounds.  This reviewer has watched the film multiple times and is as fascinating, frustrating, and illuminating as one would think.  Often all those contradictory feeling at the same time.  Llansó densely layers the visuals, themes, and story so completely that your first viewing, or few for that matter, are to let it wash over you.

Many will watch Jesus Shows You the Way to the Highway and think it’s cult for cult’s sake.  Which is not the point.  Its through these troupes that Llansó uses, through the pop culture references he imbeds into his film does his purpose become clear.  He’s drawing your attention in so many directions that it can become frustrating, but the film was intentionally designed this way.  Your first viewing of Jesus Shows You the Way to the Highway may be an obtuse experience but it will be an enjoyable one.

For some the first will be their own visit.  For others it will be only the beginning.  Thus is the power of this unique and divisive film.

Also included on the disc is Llansó’s first film.  The equally mystifying quest film Crumbs.  Densely layered and packed with references so diverse that one will be as intrigued by this film as they will be of Jesus Shows You the Way to the Highway.

Candy (Tadesse), in order to get he and his beloved Sayat (Selam Tesfayie), must go on a quest to find Santa Claus (Tsegaye Abegaz).  Why must he find Santa Claus?  To ask for his Christmas wish to leave earth aboard the spaceship hovering over Post-Apocalyptic Ethiopia.  Nazi, Men on Horses, Witches all inform on Candy’s journey.

Crumbs may be less densely populated with pop culture refences but is by no means any less enjoyable or richly complex.  In fact, Llansó’s first feature is more entertaining in its straight-ahead narrative formality.  The veering off the rails that Jesus Shows You the Way to the Highway so expertly deals with is not here.  Though his pop culture references come just as fast, loose, and seemingly without context.  Though in Crumbs there is something alternately hilarious and fitting that Michael Jordan is a God or Demi-God that is prayed to throughout.

Audio Commentary by Alexandra Heller-Nicholas and Anton Bitel, film critics both from Australia navigate us through this oftentimes confounding, confusing, and baffling lo-fi sci-fi action political thriller.  Beginning with the discussing director Miguel Llansó beginning with his shorts and his first film Crumbs (his first film that’s included on this set) and how they relate to Jesus Shows You… They also discuss his relationship with star Daniel Tadesse.  There is so much to they speak in this film; the LGBTQ, the decision to not shoot Sync Sound, the genre-mashing, the political themes, critic Jeffrey Sconce and Paracinema (the politics of tastes), the Afrofuturism in the piece, and the appropriation of it (and criticism piece by Mark Bould), Psychobook (and how it relates to modern technology), Outdated tech and its use in the film, how the constructed illusion, paranoia, and a lot more.  This is an absolute must-listen.

From Talinn with Love (13:49) – is a new visual essay by critic will Webb discussing the influences of Jesus Shows You the Way to the Highway. The influence of the Italian Spy-Rip Off, the Luchador genre (including the very famous Santo), Martial Arts Films (including Brucespoiltation), Batman ’66, 8-Bit Video Games, the bucking of the conventions and tropes of the genre’s its referencing.

A Conversation with Miguel Llansó (25:50) – the newly recorded audio interview is hosted by critic Josh Hurtado.  Llansó discusses how he went from Madrid to Ethiopia to become a filmmaker, how Daniel Workou became friends and began to work, his work with Daniel Tadesse and the other actors, his references in the films, and how exacting he was with his choices (again going back to this reviewers mantra that nothing is done by mistake in a film), the evolution of technology and how it was embedded into his film, the “human” stop-motion, and more.  In lieu of a commentary by Llansó, this is a great interview with images from the film rather than the interview footage.

Chigger Ale (11:34) – a man (Daniel Tadesse) dressed as Hitler attempts to get revenge on the Security Guard that he felt has wrong him is the surface story of this truly unique Sci-Fi canny bit of absurdism.

Night in the Wild Garden (6:37) – a “human” stop-motion short with a man (presumably Jesus) in a house as the outside world is disrupted by technology and the small reprieve he has.  A fascinating bit of visual uniqueness that feels influenced by Shinya Tsukamoto’s use of similar stop motion.

Original Proof-of-Concept Trailer (3:33) – The trailer is great and definitely has some of the same shots and probably has shots pulled. Its a great reference point for people who are interested in something we do not often see; proof-of-concept.

Image Gallery (20:06) – the gallery consists of 125 production-stills.  The gallery can run automatically or searched by using the Chapter Stop Buttons on your Remote Control.

Crumb Anecdotes (6:43) – is an all-new audio interview from Miguel Llansó. Llansó discusses various recollections from the filming of Crumbs. Anecdotes like they traveled 2500 miles to film this movie, Bandits basically forcing them (with the aid of AK-47s) to pay to film at a location, a deleted scene shows up, an incident involving quicksand, and more. This micro commentary is a fascinating look at Llansó’s first film.

Arrow Video’s Blu-Ray of Jesus Shows You the Way to the Highway will be something special for Cult Film Fans.  Recommended.