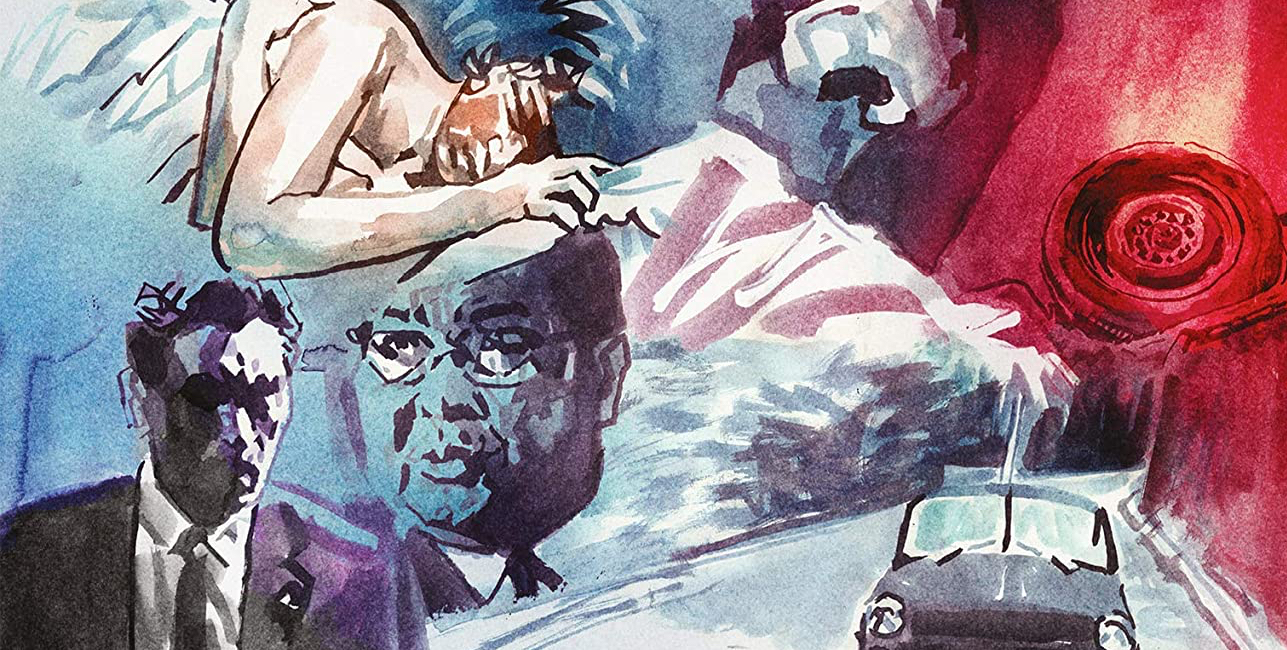 Arrow Video brings the bleakest of satires from Yasuzo Masumura to Blu-Ray.  Black Test Car and The Black Report are beautifully transferred to Hi-Def.

The most shocking aspect of Black Test Car is just how fresh it seems for a film that’s close to 60 years old.  Concerning two rival Car Companies in a literal deadly game of Corporate Espionage over the release of their respective cars.  John La Carre has never written people so ruthlessly calculating and manipulative.  That is part of the fun of Masumura’s film. The lengths these people will go to win this elusive game of Corporate Destruction.  The beauty of this vicious satire is the ever-rising escalation in the tactics each company uses to gain an edge; blackmail, prostitution, drugs, alcohol, bribery, lies, deception, are all fair game in this world.  Masumura’s film is the type by its end you won’t be able to determine if you’re out of breath because of the gut-punch ending or taunt storytelling slowly wrapping around your neck.  It will more than likely be both.

Moving from the world of Big Business to the Halls of Justice seems to have suited Masumura’s style of filmmaking.  The Black Report is the sort of tarnished look at the criminal justice system that would eventually be taken on by the likes of Alan Pakula and Sydney Lumet but not for another decade.  Masumura was doing it in the early 1960s.  The Black Report about the Murder of a Rich Industrialist and the ambitious, albeit naïve, Assistant DA who takes the case to trial.  A much craftier Defense Lawyer, morally compromised family members, and time all contribute to an ending rich, ripe, and ultimately fitting for 2020.  This is not the sort of film that has a bright disposition of people.  In fact, The Black Report may be more cynical or honest about its subject matter than even Black Test Car.

For this reviewer, nothing is prettier in high definition than Black & White Widescreen cinematography.  Arrow Video gives us a two-for-one with Black Test Car and The Black Report as both are beautiful Black and White Widescreen films.  Each’s of the transfer has beautiful contrast levels and grain structure.

What Masumura Does With Our Madness (17:02) – is a new visual essay by critic Jonathan Rosenbaum about director Yasuzo Masumura the director of both Black Test Car and The Black Report.  Beginning with a discussion of Billy Wilder and how he compares to Masumura and their possible cynical outlook.  Rosenbaum does a great job of dissecting Masumura’s career, schooling (one of his professors and mentor of sorts was Michelangelo Antonioni), a career in films, and criticism.  Rosenbaum uses Masumura’s writings as a critic and his musing on the subject of films to give us some great context to the director’s purpose, and also Black Test Car and The Black Report.  The Essay includes some great stills and clips from other films.  In lieu of a commentary, this is a great featurette that should be watched after both features.

Black Test Car (2:40) – A collection of 17 Black and White Production stills, Movie Posters, and Press Materials.  The gallery can be navigated by using the chapter stop buttons on your remote.

The Black Report (2:10) – A collection of 14 Black and White Production Stills and Movie Posters.  The Gallery can be navigated by using the chapter stop buttons on your remote.

Arrow Video has done it again.  Given us not just one but two underseen gems.  High Recommendation.