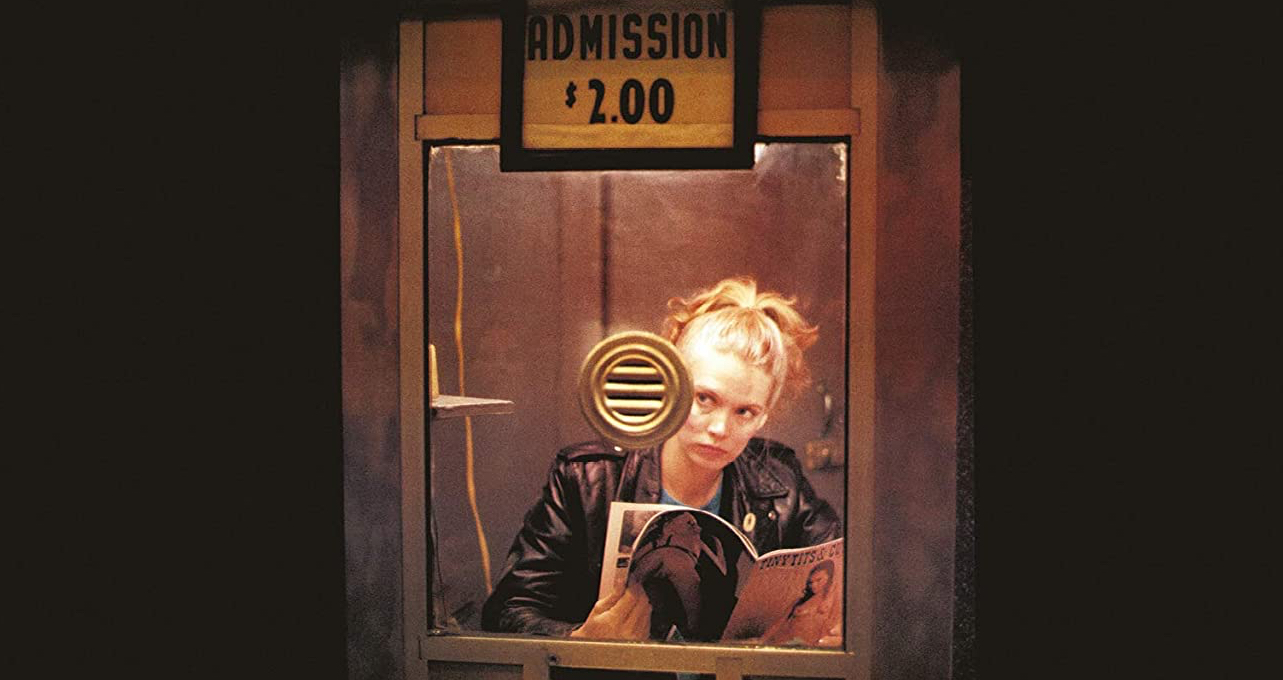 Bette Gordon’s virtuoso Variety is a Hitchcockian Thriller done through the female gaze.  Kino Lorber brings this gem of a film to Blu-Ray with a new 2K restoration and extras.

To only call Variety a variation on Hitchcock would be to discredit all of the work that Bette Gordon and her crew have done.  Variety and its lead performance by Sandy Mcleod are much more than a thriller of obsession.

Christine (Mcleod) takes a job as selling Tickets at a run-down Porn Theater in New York City.  Partially for money, partially out of curiosity.  Christine spends her time not repulsed by the patrons but compelled by them.  Slowly she is pulled into the life of one of the patrons going out on a date with him and eventually watching him from a distance.  Christine begins to go deeper and deeper into her obsession with this mysterious man (Richard Davidson).  Finding her independence as a woman slowly begins to assert itself from her would-be boyfriend (Will Patton) and the conventions of patriarchal life.

Under Gordon’s eye, Christine is never judged for her sexual awakening (**cough*mrdepalma*mrhitchcock*cough**).  That awakening is observed and made one of the defining arcs in the film.  It does not become a “trespass” that she must be punished for.  The awakening engenders strength and it brings focus to Christine.  No longer indecisive she begins to make decisions on behalf of herself. But never held in judgment for, which again in this type of film is almost revolutionary.

Gordon’s film is truly a worthy thriller that’s been overlooked for far too long.  Hopefully, more people find Variety as thought-provoking at this review did.

The 2K restoration done by Kino Lorber and Bette Gordon is nothing short of astounding.  All one needs to do is look at the previous iterations of the film on home video to see the work here is nothing short of miraculous.  The 16mm shot film is beautifully reproduced here with a beautiful patina of grain (as the best 16mm shot films do).  The restoration ensures that the image remains sharp but not getting into the artificiality of being DNR’ed to death.

The Audio Commentary by filmmaker Bette Gordon moderated by critic and journalist Hillary Weston.  Gordon wastes no time in discussing her great film and how it was developed and produced.  Weston helps with guiding the conversation.  There are some great anecdotes on how the film was developed through experience and Gordon’s general curiosity on the various topics in the film. The time in New York City and the film movement at the time.  The Independent film movie.  Discovery female directors like Ida Lupino and Barbara Loden at a time when they were not discussed.  The shooting in the various locations that were at the time male-dominated like (the old) Yankee Stadium, Fisherman’s Market, and Porn Theatres. Shooting 16mm, going to Cannes, Blowing up the film of 35mm.  The influence of German New Wave filmmakers on her work and the way she shot.  The sexuality and the themes of the sexuality within the film.  The bold ending.  This commentary is well worth a listen.

Anybody’s Woman (23:36) – this 1981 short film directed by Bette Gordon is a precursor to Variety and its themes of obsession, sexuality, sexual politics, and feminine discovery.  There are definitely hardline connections between the two films, even sharing exact scenes.  Watch out for a beardless Mark Boone Junior (who’s also in the film) in the Will Patton boyfriend role.

Gallery of Production Stills (5:02) – Set to John Lurie’s score the 29 production stills by Nan Goldin can be played automatically or skipped photos by using the Chapter Button on your remote (though this will skip the Lurie score).

Storyboard Illustration Slideshow (6:52) – is a collection of 40 Storyboard images (with a single surprise bit of artful naughtiness at the end of the storyboards for those who are patient) drawn by Gordon and Tim Burns can be played automatically with the John Lurie score or skipped by using the Chapter Button on your remote.

Rounding out the special features are the trailers for Variety (2:12) and another Bette Gordon film, Luminous Motion (1:34).

Variety is a micro-classic that deserves to be rediscovered.  Highest possible recommendations.

Kino Lorber’s Blu-Ray of Variety is out September 29th