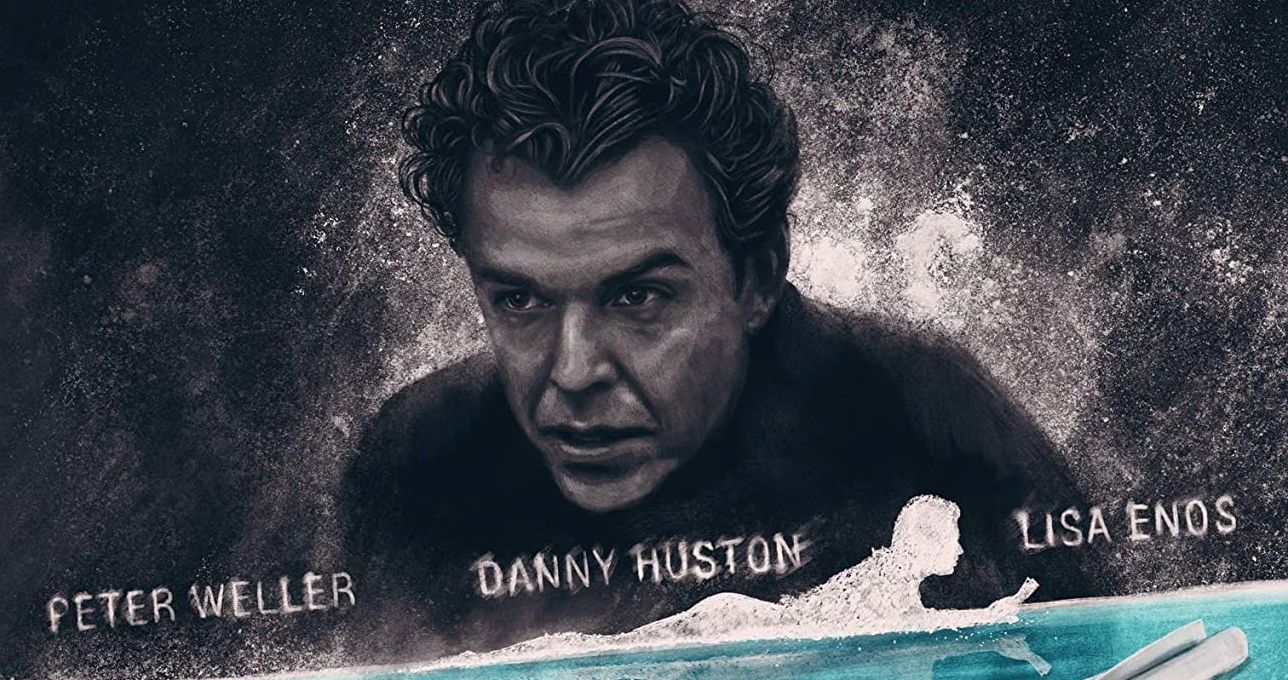 One of the best films of the early 2000s and you’ve probably never seen it.  Arrow Video brings Ivansxtc to Blu-Ray beautifully restored and featuring a host of features.

Someone could call Ivansxtc a Hollywood Insider film.  Yes, it’s about an Agent (Danny Houston) whose life is spiraling out of control.  But Ivansxtc is more than just a treatise on the Hollywood game.  The Bernard Rose film is about death and how we all ultimately die alone as it is as anything else.

Ivan is at the top of his game.  Young, vicious, smart, he’s stabbing people in the back with a shit-eating grin on his face.  A shark if you’ve ever seen one.  He’s managed to make his big movie and turn a steaming pile, a script called Weeds, into pure gold.  The super-agent not only attaching one of Hollywood’s biggest Stars Don West (Peter Weller) but signing him as a client.

The world as they say is Ivan’s oyster, but it isn’t. The man has just been given some life-altering news.  The news only spins Ivan out of control and into a cloud of drugs, booze, and women.

What many Hollywood Insider films suffer from is they are ultimately about nothing.  They’re made for the sake of ego.  The great ones have something greater to say.  More often than not more of these films are just a proverbial wank-fest.

Swimming with Sharks is about that horrible boss we’ve all been under.  Day for Night is about the beauty of the community of artisans.  Once Upon A Time In Hollywood is about friendship and approaching your middle age.  Mulholland Drive is … well we’re all still trying to figure that one out, but it is about SOMETHING.  Ivansxtc like the greats of this genre is about something more than the sum of its parts.

The loneliness of death can be an oppressive and heady topic to face but the way that Ivansxtc’s approaches this makes it fascinating.  Rather than taking that topic head-on, the way that the script written by Co-Star/Producer Lisa Enos and Bernard Rose is to get the inevitable out of the way.  Ivan’s death begins the film.

It is only after his funeral we flashback to days/weeks/months prior (we are never told how far back).  Ivan at the height of his glory.  With the knowledge of Ivan’s fate, not some sort of shock twist ending, we are allowed to take in this man.  The life he lives.  The way he treats his co-workers, his lovers, his “friends”.  How he reacts as he begins to realize the sum of the parts of his life does not amount to anything.  The grasping at something to medicate, to numb out the pain, to numb out the bad decisions, a life that is quickly turning to nothing.

There is so much to talk about in Ivansxtc.  The acting by Enos, Weller, and Houston.  The otherworldly photography by Rose and Co-Cinematographer Ron Forsythe.  The Use of Wagner’s Tristan and Isolde.  But to talk more about it would be to ruin what many have not seen.  This 20-year-old film deserves an audience and a level up in the film community.  It’s that good.

Note:  Theatrical Cut presented in two versions; the preferred director’s version (24i) and the producer’s version (60i)

So, there are actually three versions to discuss on this disc.

Bernard Rose’s preferred version is the 24i version of the film.  Meaning its shown at 24fps interlaced.  This picture is a bit more pleasing to a Cinephile’s eye.  It manages to be a bit more “cinematic”.  I can see why Rose preferred this version.  It creates the look he probably intended that was much better than the Theatrical or DVD versions which looked very muddled.  It’s clean and has the look that early digital films like Collateral have.

The Extended and Theatrical 60i versions are honestly very different but, this may be controversial of this reviewer saying this… my preferred version.  Now, hear me out.  The film was shot natively at 60fps.  Now, yes, Rose intended it to be shown 24fps but… that doesn’t mean it helps or enhances the film.  Which having watched all three versions, both the 60i versions are the way to go. The raw clarity and sharpness of the image, the unforgiving nature of the digital format ENHANCES, and make Ivansxtc a transfixing experience. The image and the images create this milieu that is undeniably unique and vital to watching this film.  You’re drawn into not distracted by this.

The Audio Commentary on the Extended Cut by Producer/Co-Writer/Star Lisa Enos and Critic/Host Richard Wolstencroft.  Wolstencroft who is the curator of the Melbourne Film Festival is the host of the track guiding Enos through the film and prompting questions.  Enos discusses her time before Ivansxtc and how everyone came to the project including Bernard Rose, Peter Weller, and the others, how technical hurdles of shooting digital (2K) back in 1999, how they emulated the Dogme95, Maynard Keenan cameos somewhere during a party scene, the nudity in the film, the various scenes and where they were filmed, and there is a lot of discussion of what is different between the extended cut and the theatrical cut. It’s a great freewheeling discussion.

Charlotte’s Story (31:11) – a new documentary from Lisa Enos on the making-of Ivansxtc. Enos guides us through the making of this very special film.  This documentary is a refreshing look at the making of a film.  Part autobiographical recollection, part documentary the featurette allows Enos, the driving force of the film and the Blu-Ray, to take center stage.  We often see Directors take the primary focus of these types of features but it’s great to see Enos who, as she says in the documentary, wore multiple hats, and was essentially the progenitor of the film is the focus.  Entertaining and if anyone (as they should be) is the least bit interested in this production should definitely watch this very personal look at what it takes to make an independent film.

Egyptian Q&A (34:33) – Larry K. Hosted Q&A from 2018 features Bernard Rose, Danny Houston, Lisa Enos, Peter Weller, and Adam Krentzman. The lively Q&A with lots of info great given out. They discussed various real-life players who cameo, the real-life agent the film is based on, how they adapted the Tolstoy novella, how they all joined the production, how they came to shoot the film digitally, and the trouble they had at the time with being able to show it properly (until recently), and much more.

Lisa Enos (11:12) – filmed during the Santa Barbara Film Festival 2001.  The Co-Writer/Producer/Actor discusses the origins of the film’s story. There is a huge amount of emotional honesty from Enos which is incredible as she speaks of her mother’s cancer. Enos also discusses how Rose came onto the project, her work in Documentary, the use of digital cameras, and more.

Bernard Rose (18:56) – filmed during the Santa Barbara Film Festival 2001.  The Co-Writer/Co-Cinematographer/Director discussed the film, his inspiration from the Tolstoy novella, his ethos on filmmaking, corporate filmmaking, Peter Weller’s work, the title’s origins, a surprising critique of a Stanley Kubrick Film, working with Danny Houston, and more.

Extended Party Sequence Outtakes (41:29) – this is some great outtake footage from the party scene mid-film with Peter Weller and Danny Houston.  Much of the footage is raw single takes as the actors improvise variations on the scene in the film.  This illustrates just how great actors both Weller and Houston are never breaking character and just flowing during this freewheeling drug and alcohol binging scene.

Theatrical Trailer (2:14) – the trailer gives an example of what the film looked like pre-restoration.

Arrow Video has done everyone a great favor in bringing this film to Blu-Ray.  Ivansxtc is one of the best discoveries of the year.  Highest Possible Recommendations!!!!

Arrow Video’s Blu-Ray of Ivansxtc is out September 29th