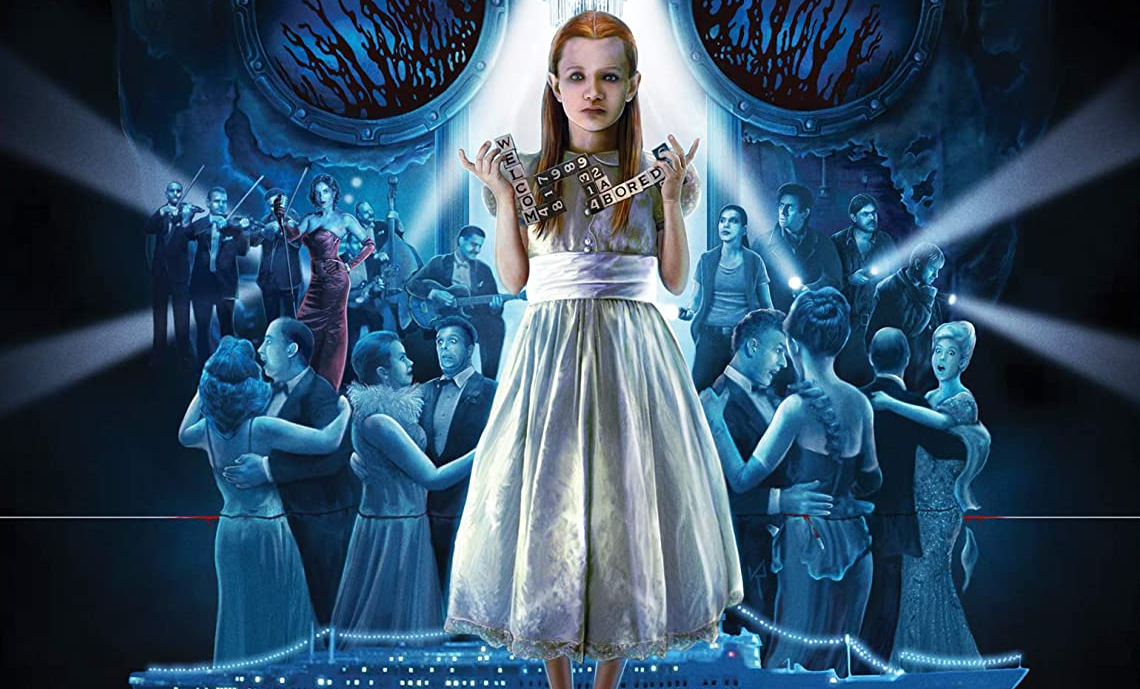 Scream Factory continues their releases of the Dark Castle catalog on Blu-Ray with another winner in Ghost Ship.

A group of ship salvagers who have been out to sea for months is offered a too good to be true offer from a pilot (Desmond Harington).  They agree and set sail.  Of course, they find the greatest of catches an Italian Luxury Cruise liner long thought lost at sea. With the clock ticking on saving this boat it becomes increasingly clear this boat is cursed and haunted (they’re not the same).

The old adage is true about Ghost Ship.  They literally don’t make them like this anymore.  Big budget horror is just longer around.  The film’s biggest assets are its lush production design. The trifecta of director Beck, production designer Grace Walker, and cinematographer Gale Tattersall make the film a big scale treat for the eyes.  The scares work because you believe the ship is real and not some set.

The script by Mark Hanlon and John Pogue is as predictable as one could get with a “haunted house” thriller.  Though the added element of an adventure at sea does add fun to the mix.  The actors do elevate the material though beyond its convention.  With a group of actors with the likes of Gabriel Bryne, Julianna Margulies, Isaiah Washington, Ron Elard, and Karl Urban you could give them the phone book and they would make it interesting.

Scream Factory has been given a beautiful transfer from Warner Brothers.  The image is crisp and pleasant to the eye.  The sharpness and color reproduction here are almost perfect.  This transfer is a definite big leap in quality from the previous Blu-Ray iteration of the film from over a decade ago.

The newly recorded audio commentary hosted by Justin Beahm of Shout Factory with director Steve Beck.  The duo, who also recorded a new commentary for 13 Ghosts, begin right away with their very informative track. Beck discusses the major changes made to the script post-9/11 with a more clear-cut film, from the Creepy-Treasure of Sierra Madre style film.  Other pieces of anecdotes covered are Joel Silver’s influence as a producer, how the script changes affected the crew, the shift away from the remaking of William Castle films, the challenges of filming underwater, Beck’s experience with the events of 9/11 (which he was in pre-production on the film), filming on the WB Australia lot, editing and the post-production of the film (also as being as Beck states “a hired gun”), working as a “hired gun” and what that entailed, the last-minute addition of Desmond Harrington (who’s part was originally cast with Sam Neill), working with child actors on violent films and how that technically works on set, and what’s happened during his career post-Ghost Ship. Beck’s very honest and lively conversationalist.  It’s a great commentary track.

This Isn’t Real – Isaiah Washington on Ghost Ship (6:37) – is an all-new interview with the actor.  Washington discusses how he went from lead to a supporting role because of the rewriting of the script, how sharks affected the underwater shoot, working with Steve Beck, working with the VFX, and much more.

Every Body on Board – Makeup Effects Supervisor Jason Baird on Ghost Ship (6:29) – is an all-new interview with the Makeup Effects Supervisor.  Starting with his origins working on Star Wars: Episode II: Attack of the Clones and The Matrix.  Moving on to Ghost Ship he worked with KNB Fx Group to get the “massive” workload, the trouble with working with water, a great moment where he shows the head cast of a specific actor, and more.  There is some choice behind-the-scenes b-roll footage for each of the key set-pieces he discusses.

Dark Castle at Sea – Producer Gil Adler on Ghost Ship (7:14) – is an all-new interview with the Producer and one of the heads of Dark Castle.  Beginning with where they were in 2001 with the state of Dark Castle.  Adler gives another perspective from Beck on what the issues were with the story and production and more.

Max on Set: Ghost Ship (15:06) – archival making-of featurette.  This is more of an EPK-style behind-the-scenes look with all of the actors in promotional mode along with Joel Silver, Gil Adler, and Steve Beck, selling the film.  The making-of does have a good amount of b-roll behind-the-scenes footage that most will be interested in, especially the practical FX work, some great shots of models, and the sets.

Visual Effects (6:01) – Ported over from the original DVD release. Gil Adler hosts this look at the visual effects.  The featurette delves into the minature work that was done on the film, which is a suprprising amount for the time (which relayed heavily on CGI).  There’s some great B-Roll footage of the work done, along with the compositing layering.

A Closer Look at the Gore (5:32) – Ported over from the original DVD release. Howard Berger from KNB and Jason Baird JNB host this detailed look at the Gore Effects.  There is a lot B-Roll behind-the-scenes footage on this featurette.  The two go over each of the bigger gore set-pieces with the guys discussing each of them in detail.

Designing the Ghost Ship (5:42) – Another featurette ported over from the DVD release. This looks at the various disciplines it took to create the actual Ship.  Using clips, production design concept sketches, split screens, and b-roll footage the featurette looks at the building of the various stages of the ship as the film required the ship to look new and heavily decayed.

Secrets of the Antonia Graza (6:12) – An interactive featurette ported over from the DVD release, much like the 13 Ghosts disc Scream Factory released last year this is one continuous featurette taking away its interactivity.  This one is a prequel to the film, giving you context to the film; with the initial crew that found the Antonia Graza, the fate of the Singer, the criminals that pull off the heist on the ship, and Katie the child-ghost.

Mudvayne “Not Falling” Music Video (3:10) – The music video is a clip package edited together from the Nu Metal Group song for the soundtrack.  Do not expect to see Mudvayne in all their Metal Glory performing.

Rounding out the special features is the theatrical trailer (2:14).