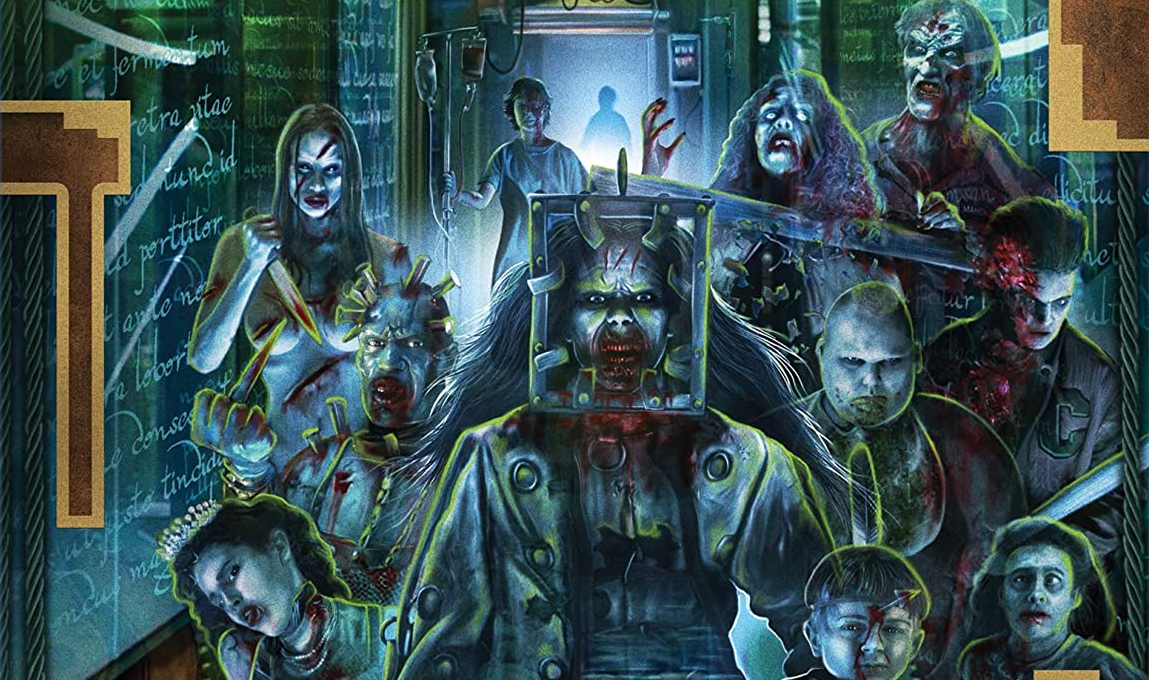 The best of the Dark Castle films, Thirteen Ghosts gets the special edition Blu-Ray treatment courtesy of Scream Factory.

Thirteen Ghosts is the kind of fun that even in its cheesiest moments is great.  It’s the kind of film that works as a Saturday Morning Matinee or a Friday Late Night watch.  The first of two Steve Beck directed Dark Castle Movies is aided by the acting talents of F Murray Abraham and Tony Shalhoub.

Mad Genius Cyrus Kriticos (Abraham) has devised a plan to open hell with the aid of 12 Ghosts.  His plans include his nephew and recent widow Arthur (Shalhoub) and his family.  Arthur thinking a windfall of good luck with inheriting a fortune and a strangely beautiful house, none-the-wiser, takes his family and housekeeper.  It is only inside the house that Cryus’s sinister plans, and the aforementioned 12 spirits make itself/themselves clear.  With the help of Dennis (Matthew Lillard), a former Cyrus employee, and Kalina (Embeth Davidtz), a Cyrus agitator, can the Kriticos family survive the house hellbent on killing them.

Much of the magic of any Dark Castle film is the sense of fun but not at the expense of story or breaking for some tounge and cheek moment.  Thirteen Ghosts lives up to that credo in every sense of the word.  Yes, there are some moments that can at times be slightly maudlin but that never betrays the film or its tone.  There is no self-referencing.

The balance between fun and scares is something that Thirteen Ghosts has like the well-oiled machine at the heart of this film.  Much of this can be attributed to the acting of greats Tony Shalhoub and F Murray Abraham.  Both award winning actors do not approach the material as they’re “slumming in”.  The actors take their roles seriously and without compromise.

It elevates everyone’s work and forces everyone, including Matthew Lillard, Shannon Elizabeth to be better than they normally would.  Even someone like Embeth Davidtz who has been good in genre material (see the equally underrated Fallen) is that much better because she’s playing against Shalhoub and Abraham.  Clearly Abraham is the one who is having the time of his life in a very Vincent Price inspired role.

Thirteen Ghosts is something we rarely get nowadays.  Glossy, gory, and most importantly fun horror film from a major studio.

Scream Factory has been given a beautiful transfer for Thirteen Ghosts.  The film was released on Blu-Ray early in the format’s inception.  A comparison of the two discs finds the Scream Factory transfer in every way is an improvement.  Film Grain, Contrast, Color Reproduction, Sharpness are all improved upon on the Scream Factory Blu-Ray.  Fans will not be disappointed.

The newly recorded Audio commentary features Director Steve Beck and hosed by Scream Factory’s Justin Beam. Beam begins with commenting that the commentary was recorded in the midst of COVID-19 shelter-in-place (which is still on-going).  Beam does a great job of coaxing interesting information about the production from Beck. The duo discusses the practical effects, Dark Castle as a production entity, the script, Beck’s history as an ad director, his time working for ILM, working with Joel Silver, the backstories behind the ghosts.  I won’t ruin it, but Beck discusses James Cameron taking on a specific job on The Abyss for what turned out to be a very funny/scary and ultimate James Cameron reason.  Beam is smart enough to ask the right questions to Beck about his time at ILM.  You’ll want to listen for just those anecdotes alone. The best part is that there is little to no crossover from the archival commentary, which is included on the disc.

The archival commentary features Beck, Production Designer Sean Hargreaves, and Special Makeup Effects Artist Howard Berger.  The track is a great technical commentary by the trio more so than the newly recorded one.

Haunted In Canada – Is an all-new 10-minute interview with Shannon Elizabeth. The actress has a lively discussion beginning with a story about being a fan of Xanadu and telling Joel Silver (who was a producer on the infamous musical).  Working with Tony Shalhoub, Matthew Lillard, director Steve Beck, working with the actors that played the ghosts, and much more.  The interview questions are prompted by an on-screen title card.

The Voice Of Reason – Is an all-new 14-minute interview with Matthew Harrison. The actor who plays Damon, Kalina (Embeth Davidtz) deader half from the opening of the film discusses how he got the role, his dialog, working with F. Murray Abraham, Davidtz, Matthew Lillard, Director Steve Beck, working with the makeup effects, and more. The interview questions are prompted by an on-screen title card.

The Juggernaut Speaks – Is an all-new 13-minute interview with John DeSantis.  The actor that plays the 12th Ghost (aka the Charles Manson ghost) discusses how he got involved in acting after serving in he military.  Other annecdotes include how he got the role, how his height and weight informed the film, working with Steve Beck, and more.  The interview has some great behind-the-scenes video from the make-up application, and a great bust/cast of his face.  The interview questions are prompted by an on-screen title card.

The Hammer Speaks – Is an all-new 6-minute interview with Herbert Duncanson.  The actor that plays the 11th Ghost (aka the Railroad Spike ghost) begins with how he got the role and a bump up from being a stand-in.  The actor discusses his backstory, the actual production, an alternate original ending, and much more.  The interview questions are prompted by an on-screen title card.

Sophomore Spookshow – Is an all-new 8-minute interview with Gilbert Adler.  The producer begins with how Dark Castle evolved out of Tales From the Crypt which was produced by Joel Silver, and Robert Zemeckis (who produced with Adler). Adler discusses the production, how William Castle inspired the film, what the ethos of the production shingle was, the production of the film, and more.  The interview questions are prompted by an on-screen title card.

Thir13en Ghosts Revealed is a 19-minute archival making-of featurette from the original DVD release from the early 2000s. This featurette is definitely of the era complete with the jittery editing and Nü Metal soundtrack (I kid you not!).  Minus those minor quibbles the featurette gives you a great glimpse into the production and effects work that went into the film. Most of the featurette is filled with great b-roll footage.  Some of it includes of footage of the makeup application, the incredible set, and more.  Joel Silver, Steve Beck, F Murray Abraham, Howard Berger, Tony Shaloub, Matthew Lillard, Shannon Elizabeth, Rah Digga, and many more add interview soundbites for the featurette.

Ghost Files: A Haunted Houseful Of Poltergeist Profiles – is a 14-minute featurette.  Originally an interactive feature on the DVD that allowed you to choose a specific object that would give you a mini documentary on one of the twelve ghosts in the film.  Here on the Blu-Ray, Scream Factory has edited the short films together into one long featurette.  F Murray Abraham cheekily narrates each of these films.

Original EPK – the original Electronic Press Kit is 43-minute featurette. Featuring Interviews with the entire Cast and Crew and Behind-The-Scenes Footage.  Some of this footage was designed as for local news affiliates to drum up enthusiasm and create a segment around their interviews.  There is however close to 25-minutes of raw b-roll production footage.  The b-roll footage is fascinating and thankfully presented without comment.

Rounding out the special features is a Trailer (2:24) and TV Spots (8 Spots).

Thirteen Ghosts is given the deluxe treatment it deserves from Scream Factory.  High Possible Recommendations.