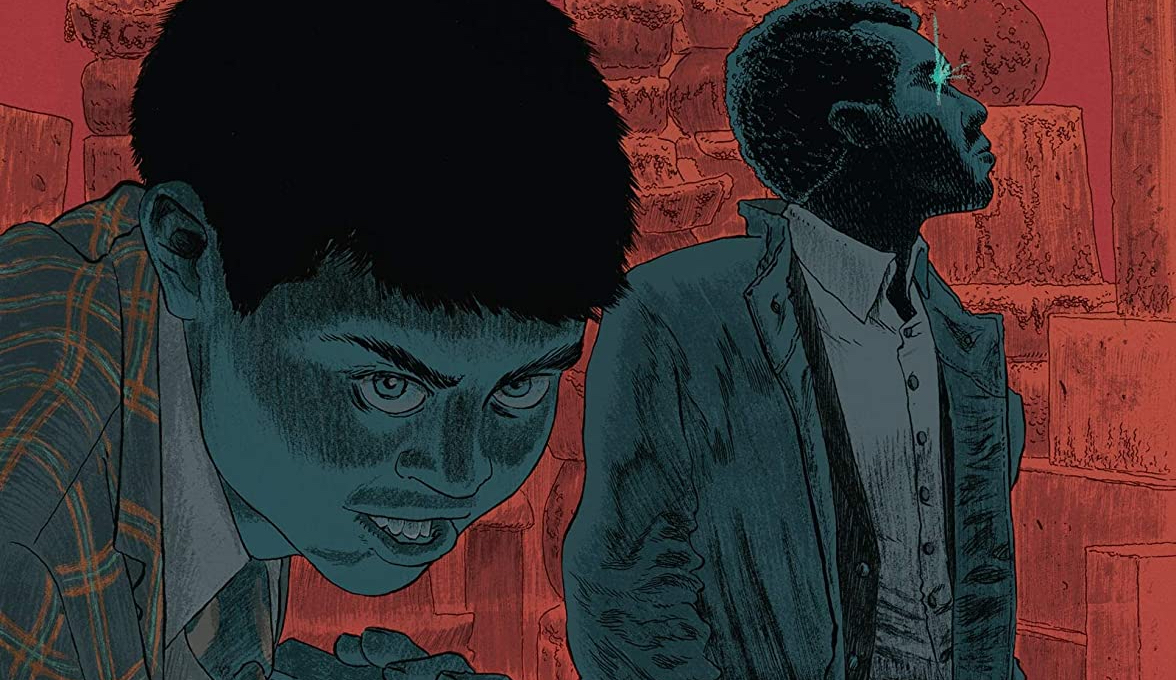 Two Yakuza Films by two Masters.  Graveyard of Honor 1975 and 2002 are put together in this great boxset by Arrow Video.

Kinji Fukasaku’s film plays like a 2:00 punk rock song.  It’s lean, mean, and style to spare.  Like an early White Stripes track, Fukasaku’s film is as cool and kick ass as you can get.  Taking the gangster picture and turning it on its ear.  Taking the wild card psychotic and making them the lead.

Rikio (Tetsuya Watari) cares noting of the hierarchy or structure of the Yakuza. He only cares about his own needs at any given moment.  The man is a rapist, killer, drug addict, thief, arsonist just to name a few things.  The leaders of the gangs in the middle of this sociopath do not know what to do with him. Rikio’s rivals fear him.  Even his contemporaries worry that he will turn on them at any given moment.

Fukasaku never sympathizes with Rikio nor does Watari’s portrayal.  Rather the film is like a horror film with the slasher in its lead.  A ticking time bomb of ID waiting to happen.  When the id explodes it does in spectacularly stylish fashion.  The film’s like all Fukasaku’s films has style to spare.  The film’s camera like Rikio is a shark on the hunt for the scent of blood, when it finds it, the explosion of violence is palatable.

Rikio is both a byproduct of and the worst-case scenario of Yazuka culture and post-war Japan that brought him about.  Graveyard of Honor like Fukasaku’s late-era classic Battle Royale is a pitch-black indictment of a social system that fails at every turn.  Though, Fukasaku’s film is done with the sort of stylish excess that he is known and praised for.

Where Fukasaku’s Adaptation of the Goro Fujita Novel of the same name was a Punk Rock interpretation, Miike’s version is Jazz.  Not Kenny G Jazz but Coltrane, Monk, or early Davis.  The kind of meditation on the genre itself.  It’s no mistake that the score is solely Jazz as Miike himself is reinterpreting of the entire Yakuza Genre.

Rikio (Goro Kishitani) is sociopath of the highest order.  He sees nothing wrong with the violence he perpetrates.  It is the Yakuza’s bad luck they catch him on a day that he decides to help them rather than hurt them.  By saving one of the Family’s Bosses he is immediately indoctrinated into the family.  The problem becomes quickly they realize this was the biggest of mistakes.  Rikio rapes, kicks, hits, beats, bludgeons, stabs, shoots, and murders everyone in his path.  He is a cancer inside of a cancer that the Yakuza are ill-equipped to deal with.

Miike’s version is about the economic collapse in Japan during the early-to-mid ’90s.  Rikio being the reckoning of ruin that everyone faced during this time.  No one escapes clean in Miike’s version no matter if you follow the rules or social decorum.  Graveyard of Honor 2002 edition is a waking nightmare there is no escaping.

1975 – is transferred beautifully to Blu-Ray with its 35mm image perfectly rendered to high-definition.  Like most of the Dei Productions that have been produced by Arrow, the film has a beautiful color reproduction and grain structure.

2002 – One of the few Miike films of the era to be shot on film.  The image is gorgeously reproduced here with sharpness and attention to the grain structure to ensure that the image looks like a beautiful 35mm print.

The newly recorded commentary by Mark Shilling is a great deep dive into the film in its production, its casting, its history, the cultural touchstones in the film, and the history of the actors and Kinji Fukasaku who made the film.  Shilling does a great and entertaining job of giving us a full history and account of the film.

Like a Balloon: The Life of a Yakuza (13:11) – is an all-new Visual Essay by Mike White (of the Projection Booth Podcast).  Beginning with the word Yakuza, White’s essay really elaborates on the history of Yazuka films, Kinji Fukasaku, the style of Fukasaku, and the film itself Graveyard of Honor.

A Portrait of Rage (19:49) – is an archival featurette discussing the work of Fukasaku from his colleagues, actors who worked with him.  Using a combination of behind-the-scenes photos, clips, and interviews the featurette goes through the director’s varied career, his life, and how violence (specifically WWII) affected his outlook, but primarily focusing on the imprint he made on the Yakuza film.

On the Set with Fukasaku (5:34) – an archival interview with Assistant Director on Graveyard of Honor, Kenichi Oguri.  Taken from the interview he’d done for A Portrait of Rage featurette, the AD is able to talk more fully about working with Fukasaku.

Image Gallery (4:41) – which can be run automatically or navigated through its 29 still images by using the Chapter Stops on your Blu-Ray Remote.

The newly recorded audio commentary by Tom Mes is fantastic.  As one would expect from hearing Mes talk Miike and Japanese Cinema in general this track is overflowing with information about Japanese Culture, the Yakuza film, the style of the film, historical context, and how the film measures up to the Fukasaku film.  Some great anecdotes include Mes seeing the film in Japan pre-release with the cast and crew, John Woo’s influence on Miike and Asia Cinema and criticism, how the Miike version is about the Japanese economical collapse, the structure of the film, how this lines up to other Miike films, the downward slide in the quality of the Yakuza films after this, how V-Cinema was essentially destroyed by DVD (which was adopted late in Japan), a mini discussion about Miike’s most recent films, specifically, First Love (Miike’s newest), and more.  Mes like his work on other Arrow Video titles is a vital and must-listen track.

Men of Violence: The Male Driving Forces in Takashi Miike’s Cinema (23:46) – is a newly produced visual essay by critic Kat Ellinger.  Using Graveyard of Honor as a centerpiece of her essay to show the way that Miike built towards this powerful film and how other films like Dead or Alive, Ichii: The Killer, and even Visitor Q relate to the film.  Ellinger does confront the violence and treatment of women head-on in this essay, giving us a counterpoint that Miike’s work is not an endorsement but rather a condemnation of the violence that’s portraited in a matter-of-factly style. This is definitely a great piece of criticism that anyone watching a Miike film, especially Graveyard of Honor should see.

Interview Special (17:59) – this archival interview taken from the time of the release of Graveyard of Honor features Miike and actors Goro Kishitani and Narimi Arimori.  All involved discuss what attracted them to the project, how they approached the project, Miike’s directorial style, and more. Japanese with English Subtitles.

Making-of Featurette (8:02) – this archival featurette, which is called “MIIKE ON FIRE!”, looks to be made for the Japanese release of the film on home video or a TV Special.  Those familiar with this style of making-of out of Japan will be right at home.  This is more of a “fly-on-the-wall” style of making-of using a combination of B-Roll behind the scenes edited together with the Completed scenes they are filming, and interviews.  One of the best moments is they show the infamous apartment shootout with the police being filmed.  Second only to a moment where they pan down to Miike wearing a pair of Red Jordan 13s (Sneaker Heads know what’s up).  If I didn’t mention it before… the title is great. Japanese with English Subtitles.

Making-of Teaser (2:14) – Japan is nothing but forward-thinking. Before we had teasers for the trailers.  They had Teasers for Making-Of Featurettes!  That’s literally what this is.  Japanese with English Subtitles.

Press Conference (4:17) – another archival featurette that appears to be made for TV or Home Video release in Japan.  Filmed at the HMV Shibuya before the release of the film director Miike and stars Kishitani and Narimi discuss the film.  Japanese with English Subtitles.

Premiere Special (4:03) – the last of the archival featurettes that again appear to be made for TV or Home Video release in Japan. Filmed during the premiere at Tokuma Hall it features Miike, Kishitani, and Narimi introducing and speaking before the film including a great bit about Miike and the Rating of the movie in Japan (it appears even Miike has problems with the Ratings Board in Japan).

Image Gallery (0:50) – which can be run automatically or navigated through its 6 still images and one poster by using the Chapter Stops on your Blu-Ray Remote.

Arrow’s Collected edition of both Graveyard of Honor is one of the best catalog releases of 2020.  Highest Possible Recommendations!!!