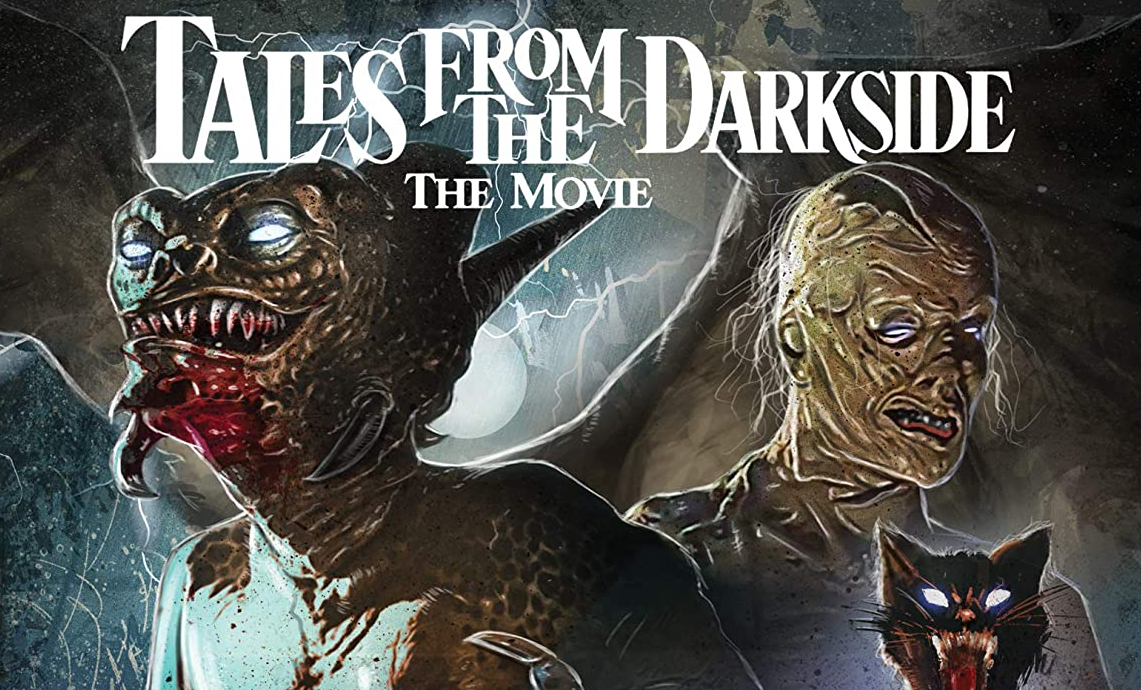 Tales From the Darkside: The Movie is given the deluxe Blu-Ray treatment from Scream Factory.

Much like Creep Show and Cat’s Eyes, Tales from the Darkside: The Movie creates an Anthology Horror Film that’s as much fun and funny as it is scary.  John Harrison directs stories from George Romero, Stephen King, Michael McDowell, and Sir Arthur Conan Doyle.

Lot 249 – two preppy pieces of shit have pulled a fast one on Bellingham (Steve Buscemi) all of who go to an Ivy League College.  The joke is on the preppies as Bellingham’s most recent purchase (of the title Lot 249) is much more than just an investment of money.

Cat from Hell – the lone surviving member of a Pharmaceutical Family (William Hickey) hires a hitman (David Johansen aka Buster Poindexter) to kill a … cat.  Thus begins the battle of wits between Cat and Hitman. Hijinx ensues.

Lover’s Vow – a struggling artist (James Remar) meets a demon whom he bargains with.  If he keeps what he has seen a secret from everyone he will get everything he wants.  The artist that night meets a beautiful woman (Rae Dawn Chong) and his life and career turns around.  Can the artist keep this secret?

The Prologue and Epilogue – A witch (Deborah Harry, yes, that Deborah Harry from Blondie) is preparing witch-ly dinner.  The main course (a young Matthew Lawrence) stops the witch by telling her the stories of the film.

Much of the entertainment value of the film comes from the great gross-out practical FX work done by KNB FX Group.  There are full-on monsters, decapitations, brains being pulled out from the nose, creature transformations, and so much more.  Tales from the Darkside never short changes its audience on delivering the FX work. Many will also find the cast which is as diverse as Debbie Harry to Rae Dawn Chong to James Remar to “newcomers” Steve Buscemi and Julianne Moore.

Part of the success of Tales From the Darkside is that only one director has directed all the segments.  No matter how hard an anthology tries, if not directed by a single creative, it always feels like a piece of a whole rather than a cohesive whole. Harrison’s film, much like Romero’s Creepshow, feels more fun than scary, though there are jump-scare moments.  The fun is in the way the stories twist and turn on your expectations of the conventions of horror.

Paramount has provided a luminous transfer to Scream Factory.  The transfer handles the multiple styles of filmmaking and color grading very well.  The color reproduction, contrast and sharpness are all on point.  What could have been a tricky transfer because of the individual stories have their own look but it the transfer handles this quite well.

The newly recorded audio commentary with Producer David R. Kappes. Hosted by Michael Felsher from Red Shirt Production (who directed the making-of on this disc) joins Kappes. The duo has a great conversation about the various productions he was involved with. The primary discussion is his involvement with Tales From the Darkside’s physical production, hiring the crew, the actors, working with John Harrison (he’s worked with him multiple times), working with KNB, how Dick Smith got a credit, working with non-Union crews, the budget, and much more.

The second audio commentary features John Harrison and George A Romero. This archival commentary recorded around 2000. The relaxed and conversational track does have a fair amount of information. Harrison and Romero discuss the origins of how the movie came together, the cast, the FX work of KNB, and much more.

Chapter One – From Small Screen to Big Screen (16:20) discusses the origins of the TV series and how it evolved into the movie, hiring John Harrison, hiring KNB, hiring the rest of the crew, the creations of the wraparound story including working with Debbie Harry.

Chapter Two – Rising Stars and The Walking Dead (17:41) focuses on the making of Lot 249.  Harrison, Draper, and Ammon discuss the look an homage to the original Mummy movie. Howard Berger and Greg Nicotero discuss the creation of the Mummy. Casting Christian Slater, Steve Buscemi, Julianne Moore, and much more.

Chapter Three – That Damn Cat! (16:51) focuses on the making of Cat from Hell.  The crew discusses how they dressed the mansion they got, how they created the visual look and coloring of the flashbacks, working with William Hickey, David Johansen, the work of KNB (which includes some great b-roll footage from the infamous cat in the mouth) and much more.

Chapter Four – A Vow to Keep (25:42) focuses on the making of The Lover’s Vow.  The cast and crew discuss how the story and visual style were developed like a fairy tale romance, the casting of Chong, the casting Remar, how the two worked together, the KNB FX work, and much more.

Chapter Five – The Order of Things (14:02) focuses on the editing of the film.  Beginning with how Harrison got a recommendation from Roadhouse director Rowdy Harrington to hire Miller as his editor.  Harrison discusses the scores and the composers, how they put together the film tonally, their ratings, cutting scenes, the reordering of the stories, and much more.

Chapter Six – The Test of Time (13:11) wraps things up with the release, the lack of success in theaters, but how it found it’s life on home video (like many of the films of the era).

Still Gallery 45 production stills that can be paused but cannot be navigated through. Some give great closeups of the FX and Makeup work done by KNB.

Behind the Scenes Still Gallery 48 behind the scenes stills that can be paused but not navigated through. These photos are better than the first gallery as they show makeup application, some of the work behind the creature from the last story, the gore FX from Cat From Hell, and more.

Behind the Scenes Footage Compilation (11:06) – this B-Roll footage is the goldmine you expect it to me. Filmmed by the KNB folks the footage shows a lot of the creature effects (from the last story, and some of the more wild FX from Cat from Hell) in various stages of completion and testing.

Tales from the Darkside: The Movie gets the deluxe treatment by Scream Factory.  The feature-length Making-Of Documentary is the highlight of the set.  This is a definite Recommend.

Scream Factory’s Blu-Ray of Tales from the Darkside: The Movie is out August 25th