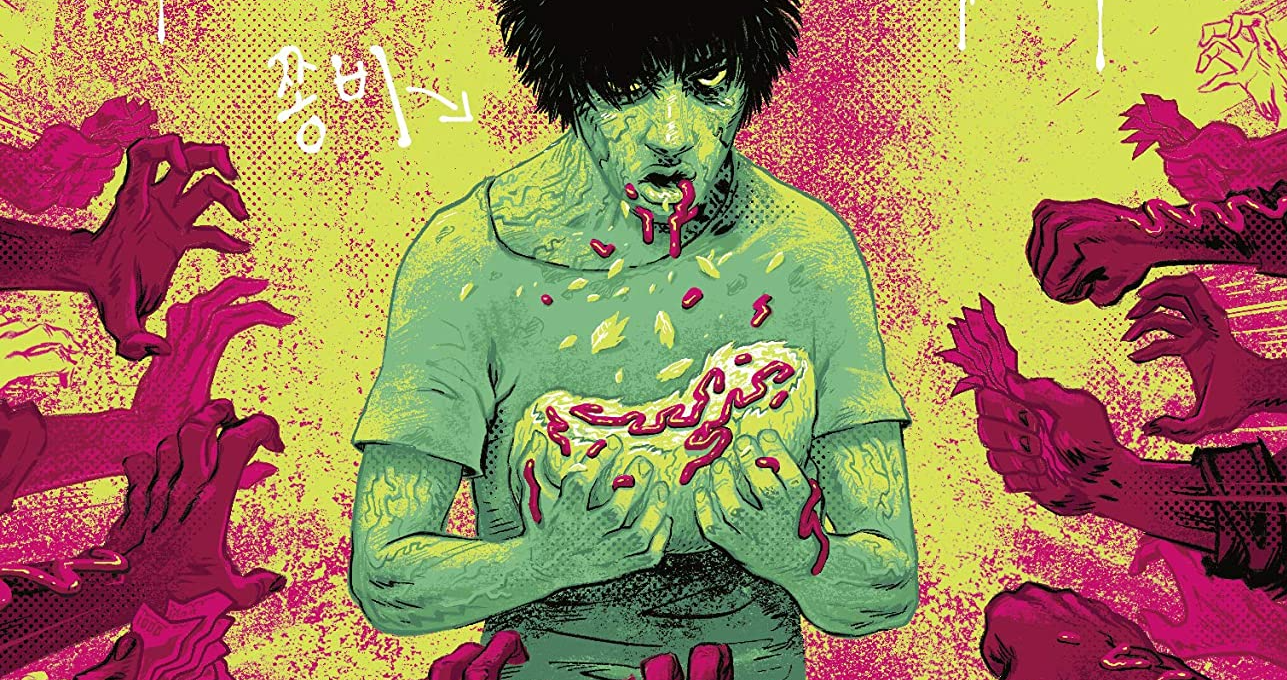 The Korean Zombie Comedy Zombie For Sale makes its US Debut thanks to Arrow Video.  Arrow has filled the Blu-Ray with a host of extras.

You know Zombie For Sale is a very different kind of Zed film when the family who think they have found a Zombie watch a scene from Train to Busan on Netflix.  It’s this kind of knowing nod that isn’t annoying but utter delightful and keeps the Lee Min-Jae film briskly moving along.

The Park family seems to constantly run small cons to make ends meet that the family gas station just doesn’t.  Imagine their luck when daughter Hae-Gul (Soo-kyung Lee) finds Pharmaceutical Test Subject gone awry.  The cabbage eating undead whom Hae-Gul names Jjong-Bi (Ga-ram Jung) becomes an unexpected source of income and is welcomed into the family.  Though like with any of these films that hubris of making money does eventually turn on the family with terrifying results.

Much like Bong Joon-ho’s earlier masterpiece The Host this is just as much a comedy about a family as it is a Zombie film.  The trick, as in Bong’s film is that both genres are treated with equal amount of respect.  Lee’s film rather than focus on Zombies puts its importance on the comedy that comes out of the Park family’s dynamics.  Which pays dividends in the final third of the film which has as many laughs as it does gore and effective scares.

Part of any Zombie film is how it lands its ending.  Zombie For Sale has that locked down in such a delightfully strange and unique way that one will find themselves chuckling at the audacity of what they pull off which is both its own ending but a so slight you’ll miss it ode to Train to Busan.  That said Zombie for Sale stands on its own as a memorable entry into the Zombie genre.

The transfer as you would expect is beautiful, sharp, and pops with color.

The new audio commentary by Sam Ashurst and Dan Martin. Both are the hosts of the Arrow Video Podcast (a pod you should be listening to). Recorded at the height of COVID shelter in place (around April 2020) which means there is a lot of discussion of how this relates to the modern era. They discuss how the film lines up to the zombie genre. A hilarious side tangent about Boondocks Saints. The guys do a great job of discussing the zombie genre and how both have worked on multiple zombie-related projects discuss the difficulty of bringing something like this to the screen.

Q&A with director Lee Min-Jae – Is a 13-minute l Q&A with the director at the Asian Pop-Up Cinema in Chicago in 2019 moderated by Darcy Paquet. With the use of translator Darcy asks general questions about the ensemble, his wife is also the screenwriter for the film, and how that relationship, they do open the Q&A for audience questions, but this isn’t really worth discussing like most audience questions.

Eat Together, Kill together: The Family In Peril Comedy – is a 19-minute visual essay by Pierce Conran discussing the Korean Social Satire. Conran discusses films like My Mother and her Guest, Aimless Bullets, The Housemaid are all discussed along with The Quiet Family, The Host, and Parasite to discuss the story formula in these films and how they line up within the genre. Other films discussed as they relate to Zombie for Sale are Going by the Law, The Host, The Fox Family, Castaway the Moon, Train to Busan, and more.

Making of Featurette- is a 4-minute making-of that’s flashy EPK style that doesn’t give much in the way of meaningful information.

Behind the Scenes is essentially two TV/Film Spots both 1-minute long. The first segment is scenes from the film. The second segment is b-roll footage. Both meant to be quick promotions for the film.

Rounding out the special features is the original Korean theatrical trailer (1:20)

Zombie for Sale is a delight. Recommended!

Arrow Video’s Blu-Ray for Zombie for Sale is out now.