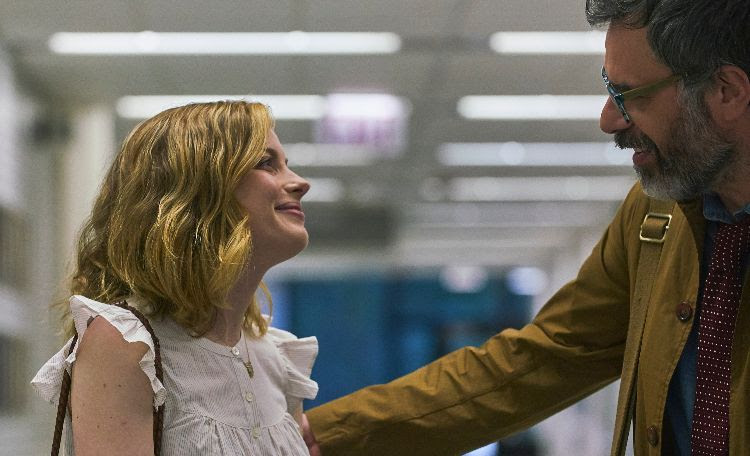 Gillian Jacobs gets center stage in Kris Rey’s I Used To Go Here. This charming small stakes comedy that’s sure to delight.

Kate’s (Jacobs) debut as a novelist has done so badly, they’ve cancelled her book tour.  By chance she gets a call from her old literature professor (Jemaine Clement) asking her to come to her old alma matter for a reading.  With nothing better to do and still licking her wounds she agrees.  What happens over the weekend isn’t life changing for Kate, thankfully, but gives her enough light to make some much needed adjustments.

By creating a movie around Jacob’s talents as an actor and comedian and then casting a great ensemble of known and unknown actors the film does what we rarely see nowadays.  A human-scale comedy that deals with the micro rather than the macro. To call this a throwback to the 90s female driven comedies would be almost accurate but also doing it a disservice.  Jacob’s Kate and the strange characters around her feel more at home with a Hal Ashby film than anything from something mass produced from Disney or Universal.

Writer/Director Kris Rey fulfils the promise of her last film Unexpected.  I Used to Go Here has the sort of grounded reality that Unexpected had but adds the gloss of a mainstream comedy.  Unlike something studio produced, Rey’s movie allows room for characters to blossom.  Though the film is never overindulgent, running at a brisk 84-minutes.  The film has enough time to give cameos to Jorma Taccone (who also produced the film via the Lonely Island Classics shingle) and Jamanie Clement but still make them feel lived in.

I Used To Go Here is a winning intimate comedy. One that is sure to make Gillian Jacobs and Kris Rey new fans.