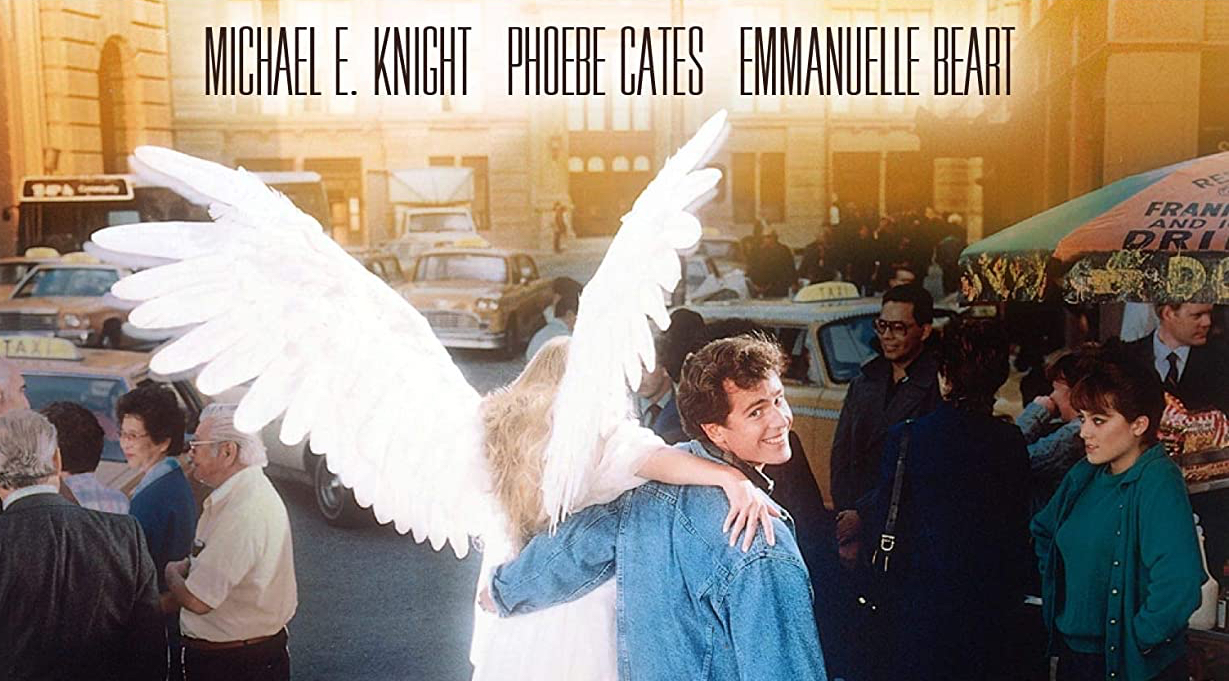 A long unavailable on home video the cult-favorite Date with An Angel makes its way to Blu-Ray courtesy of Kino Lorber’s KL Studio Classics label.

There are quite a few films that were perennial entries to the HBO staple (think The Secret of My Success, Blind Date, Twice Upon a Time, Remo Williams).  Date with An Angel was definitely one of those staples.  The Tom Mcloughlin directed film is one-part Frank Capra one-part Savage Steve Holland.  The results… a uniquely 80s Rom-Com that is now a bit troubling.

The night of Jim’s (Michael E Knight) engagement party he’s literally kidnaped by his asshole friends for a bachelor party.  After a night of partying an Angel (Emmanuelle Béart) drops from the heavens.  Her wing broken, Jim attempts to heal her.  In the process incurs the wrath of his future wife (Phoebe Cates) and his future father-in-law.  Of course, the three asshole “friends” want nothing more than to exploit her for money.  Though it all ends happily.

The film suffers ultimately from the “comedy” of the era.  There is an ample amount of earnestness that’s mired by what’s considered funny at the time.  The dated nature of what at the time seems like harmless fun of Jim’s friends posing as “Terrorists” to take him away from the party just falls flat.  The literal torture of the Cates’ character that is supposed to be light slapstick comes off as meanspirited.  The three friends that are supposed to be fun comedic relief comes off like a bunch of bro-tastic pricks that would exploit anyone or anything for a buck. Even if Jim confronts them the film still takes huge chunks of time showing comedic setpieces with these friends doing harm to the Angel.

Date with An Angel what seemed charming thirty plus years ago is now on the wrong side of taste.  One wishes that they had dropped or minimized Jim’s friends who even at the time came off as shrill and highly inappropriate.

The transfer minus a few scratches and specks of dirt looks gorgeous.  The Alex Thompson’s widescreen photography looks positively luminous on Blu-Ray.  The ethereal quality that Thompson’s image has is produced perfectly without losing its sharpness.

The audio commentary by Writer/Director Tom McLoughlin is newly recorded for the disc.  He introduces the commentary by discussing that he was sheltering-in-place as it was recorded during the height of COVID (which of course is still happening at the time of writing this).  The relaxed commentary is definitely informative and entertaining.  The director never suffers from the dreaded “describing what is happening on-screen” and manages to give a lot of information about the production, the writing of the script, and much more.  Some of the great anecdotes he discusses are studying Mime with Marcel Marsal, the Frank Capra heavy influence, how that lead to getting notes from Capra himself, a cameo from a certain Academy Award-winning actor that never happened, and much more.

Making-of Featurette – is a 6-minute archival EPK style making-of.  This vintage video featurette is a great piece of nostalgia.  If anyone is curious about how bad VHS was at the time, just need to look at this.  A combination of b-roll, clips, and interviews make up this featurette.

Select Sound Bites – is a 3-minute collection from a News package that would have been sent out to TV Affiliates for their “Entertainment News”.  This is also like the Making-Of shot on Video and sources from video.

Kino’s Blu-Ray Date with An Angel will please fans of this Cable Cult Favorite.