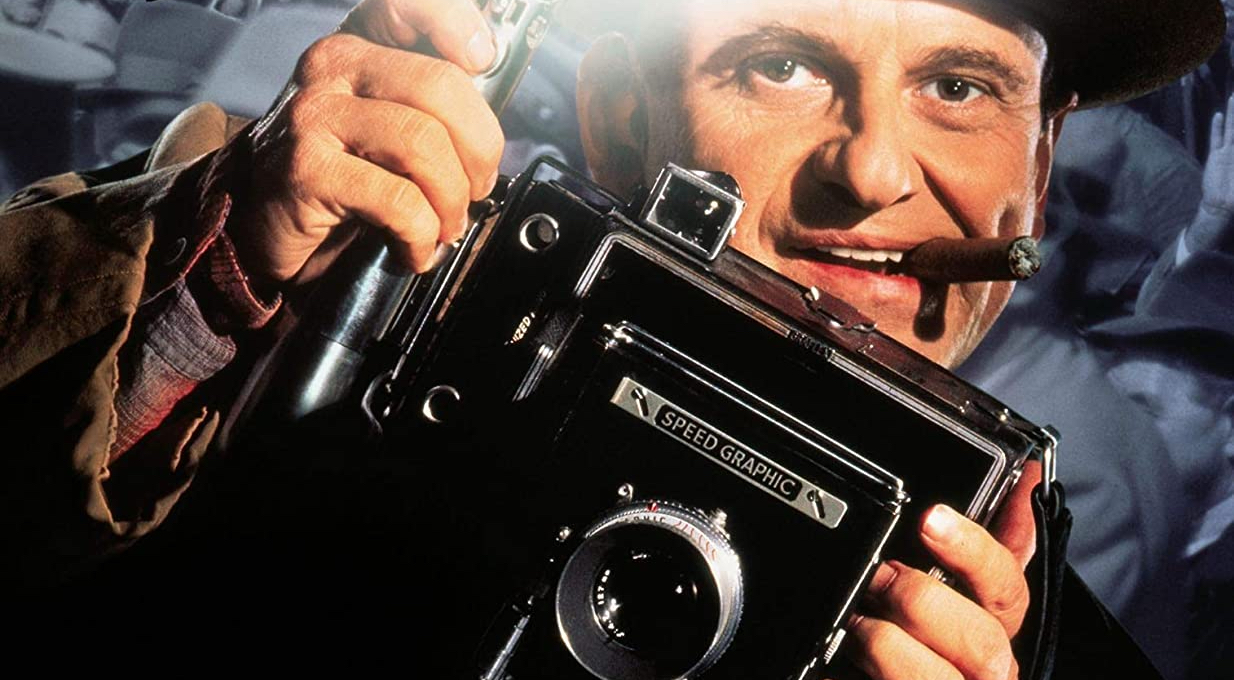 As a critic with every review of a catalog title either you have forgotten or missed upon theatrical release is a discovery of a classic.  Often times you find the reputation fits the title.  Rarely you find one that little has been written about.  Rarer still is one that is honest to god underseen bona fide great work.  Howard Franklin’s The Public Eye is a qualifier for the last two.

Gossip Photographer Leon “The Great Brenzini” Bernstein (Joe Pesci) is at the top of his game.  Murder, tragedy, starlets, gangsters, Bernstein covers it all for the price.  The man aspires for greater artistic endeavors but as all that are forced into a life that many consider less than reputable, his business keeps him an outsider.  By chance, the beautiful Kay Levitz (Barbara Hershey) asks Bernstein to take photos of a man, a possible gangster, who is attempting to take her famous restaurant.  Bernstein gets more than he bargained for with the FBI, Gangsters, Turf War, Tariff swindling and so much more.  If he’s lucky he’ll be able to survive with his life.

Franklin’s film is a propulsive yarn that continually pushes the threat of violence at every darkened corner.  The Public Eye is one of those rare films that not only harkens back to a more terse antiquated era but manages to invoke a more modern disposition.  Like Chinatown or Devil in a Blue Dress, this film takes the era it takes place in and morphs it into its current times.

Though it fills the requirements for a great mystery noir the film works best as a character study. The film is a stage for great work not only by Pesci and Hershey but stellar early work by Stanley Tucci, Jared Harris, and Richard Schiff.  Though Pesci had been given leads, they were mainly comedic roles, this is the rare dramatic lead for Pesci.  The actor is as good as he’s ever been as Bernstein a man who is crushed by society because of his work and race but strives for more.  Hershey is as good as she ever was as a woman not so much femme fatale as a woman without options.  The coupling of Pesci and Hershey at first appearance would be a terrible idea but the actors exude specific chemistry that works in favor of the film’s broken soul narrative.

The Public Eye by its final moments convinces its audience it’s earned every piece of pay off that its setup through the narrative.  It is the rare modern film noir with modern sensibilities that work as both modern and antiquated filmmaking.

This one is a stunner.  It’s not ironic in the least that a film about a photographer is one of the best transfers of the year.  KL Studio Classics has obtained a beautiful new transfer that’s razor-sharp without the loss of any of the images grain structure.  The contrast levels are near perfect as is the color reproduction.  Anyone that is a fan of this film is going to be shocked and delighted by this, which is the highlight of the disc.

The newly recorded audio commentary with Howard Franklin hosted by Daniel Kremer who prompts (rarely) the very loquacious writer/director.  Some really, interesting anecdotes that Franklin discusses including Producer of the film Robert Zemeckis reshooting a lot of Romancing the Stone (which Franklin did rewrites on), how Zemeckis almost directed a film version of what would eventually become a 90s blockbuster failure, his honest discussion about how and why they dropped Jerry Goldsmith’s score, the casting and story behind finding Jerry Adler (those Sopranos fan will know Adler), working with Barbara Hershey, Pesci, and within the studio system with what’s now a huge budget, working with ILM, and much more.

Rounding out the special features are trailers for The Public Eye, True Confessions, Mulholland Falls, and Gone Fishin’.

The Public Eye is an outright forgotten neo-classic waiting to be discovered.  HIGHEST POSSIBLE RECOMMENDATIONS!!!!