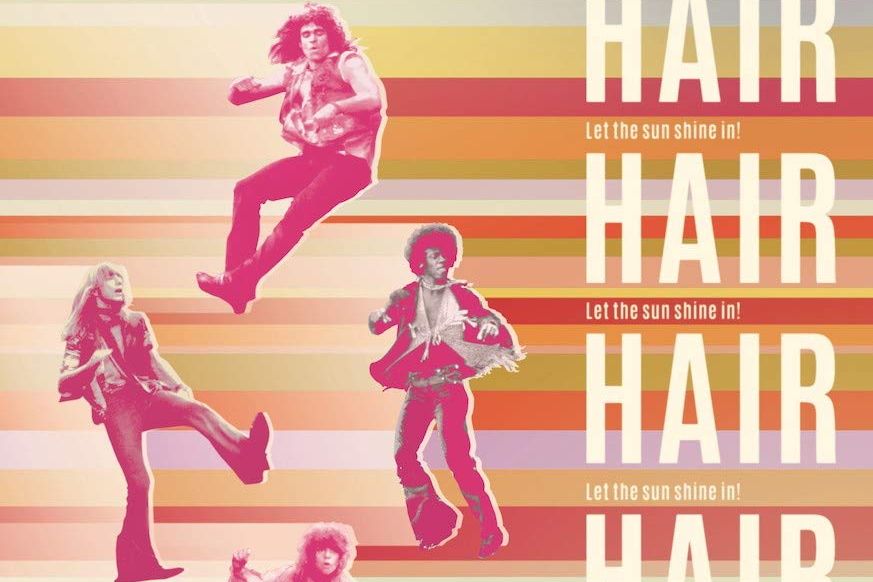 Milos Foreman’s Hair, the infamous 60s Musical made into a late 70s movie makes it return to Blu-Ray with a beautiful new restoration and special features courtesy of Olive Films’ Signature Collection.

Some Zeitgeist events you have to “have been there” to really understand its power.  The musical and film version of Hair is nothing something this reviewer fully understands but completely respects.  Especially the work of Milos Foreman, John Savage, Beverly D’Angelo, and Treat Williams.

Having his number come up in the draft, Claude Bukowski (Savage) heads to New York City to report for his service in the Army.  Going from Tulsa to New York is a culture shock for the young man.  In Central Park, of all places, he meets George Berger (Williams), Hud (Dorsey Wright), Jeannie (Annie Golden), and Woof (Don Dacus) the most Hippie of Hippies you would ever meet.  With only three days to report, George and Company show Claude what the counterculture is all about. As they get into trouble, Claude falls in love at first sight with Shelia (D’Angelo) the most wasp-y of love interests.  Even in musicals, the Draft cannot stop for any man.  Though George, Shelia, and the rest will not stand for the injustice of Claude going to Vietnam and hatch a plan to bust him out of Basic Training.

Especially, during these turbulent times, Hair seems more prescient than ever before.  A musical that isn’t simply about the Vietnam war but about every sort of inequality be it Racial, Gender, Sexual, Income that comes with oppressive times.  Foreman’s grounded lived in direction is the highlight of the film with many films later following suit (the adaptations of Les Miserable, and RENT).  He working with cinematographer Miroslav Ondříček create a lushly trashy New York City that is both grimly and beautiful in its destitute.

The large portion of why the film does not work is the changes made in the stage play to film.  It is admirable that they have tried to “open up” the play giving it a more conventional storyline but by doing so the film loses the uniqueness of the musical.  Much of what you see is perfunctory, and even at the time had a “been there done that” quality.  The adaptation flattens much of what’s dangerous about the musical for general mass consumption.

Hair is an adaptation that with all the inspired direction, good acting, the fun staging of the musical set-pieces cannot escape the missteps of the adaptation.

The New HD restoration is as beautiful as the film has ever looked.  The beautiful 35mm image is realized to perfection here.  The image is sharp without losing the grain structure that gives a Blu-Ray its filmic quality. Olive Films again strikes with a Blu-Ray that looks more like a freshly struck archival print than some sort of crisp DNR’ed to death HD Image.

The newly recorded audio commentary with AD Michael Hausman and Treat Williams is a delightful trip down memory road.  The track’s only issue is that it appears that the two frequently and for long stretches stop talking.  The two drop off around the time the group is arrested and the Judge lays out sentencing for what feels like 30-minutes.  That aside both men give great anecdotes about the production with Williams doing a terrible Foreman impersonation.

The Tribe Remembers – is a 30-minute featurette with actors John Savage, Beverly D’Angelo, Dorsey Wright, Don Dacus, Ellen Foley, Annie Golden, and Ellen Foley. The actors recount the making of the film.  Much of what’s discussed is working with, methodology, personal anecdotes about the late-great Milos Foreman.  To be honest, this handsomely produced making-of is almost better than the film itself.  Those that love this film are in for a treat as all the actors, minus Treat Williams, participates.

Making Chance Work: Choreographing Hair – is a 12-minute interview with choreographer Twyla Tharp. Tharp begins with her origins and inspirations to become a choreographer.  The interview is definitely an ode to working with Foreman.  The best anecdote is Thrap demanding to screen all of Foreman’s films because she didn’t know who he was, and his reaction (which coincidentally should be the response from any filmmaker). Tharp is great as she suffers NO FOOLS and one can tell.

Cutting Hair – is a 21-minute interview with editors Lynzee Klingman and Stanley Warnow.  The interview is a fascinating look at what it took to edit the film. Both Klingman (who was the Supervising Editor) and Warnow (who was Co-Editor) discuss their origin.  Klingman’s origin is, particularly of interest. They both dive into how they began to work with Foreman (Klingman worked on One Who Flew Over the Cuckoo’s Nest, Warnow was hired because of his work on Woodstock), the “nuts and bolts” of what it took to edit Hair, and how it was to work with Foreman.

Artist, Teacher, Mentor: Remembering Milos Forman – is a 24-minute interview with director James Mangold.  Mangold begins with his origins as a filmmaker and how he became to Foreman’s screenwriting classes and how it informed the writing that would become his debut feature Heavy.  Mangold also discusses Hair as a film, how it influenced him (specifically with Walk the Line), its importance in the cinema landscape, and much more.  If you’re not a fan of the film, give this interview a chance as Mangold definitely gives a lot of great critiques and context for the film. Much of what I’ve critiqued about the film Mangold definitely counters.

Rounding out the special features is a Trailer (2:48) and an Essay by Shelia O’Malley, which is also included in the booklet in the disc’s case.