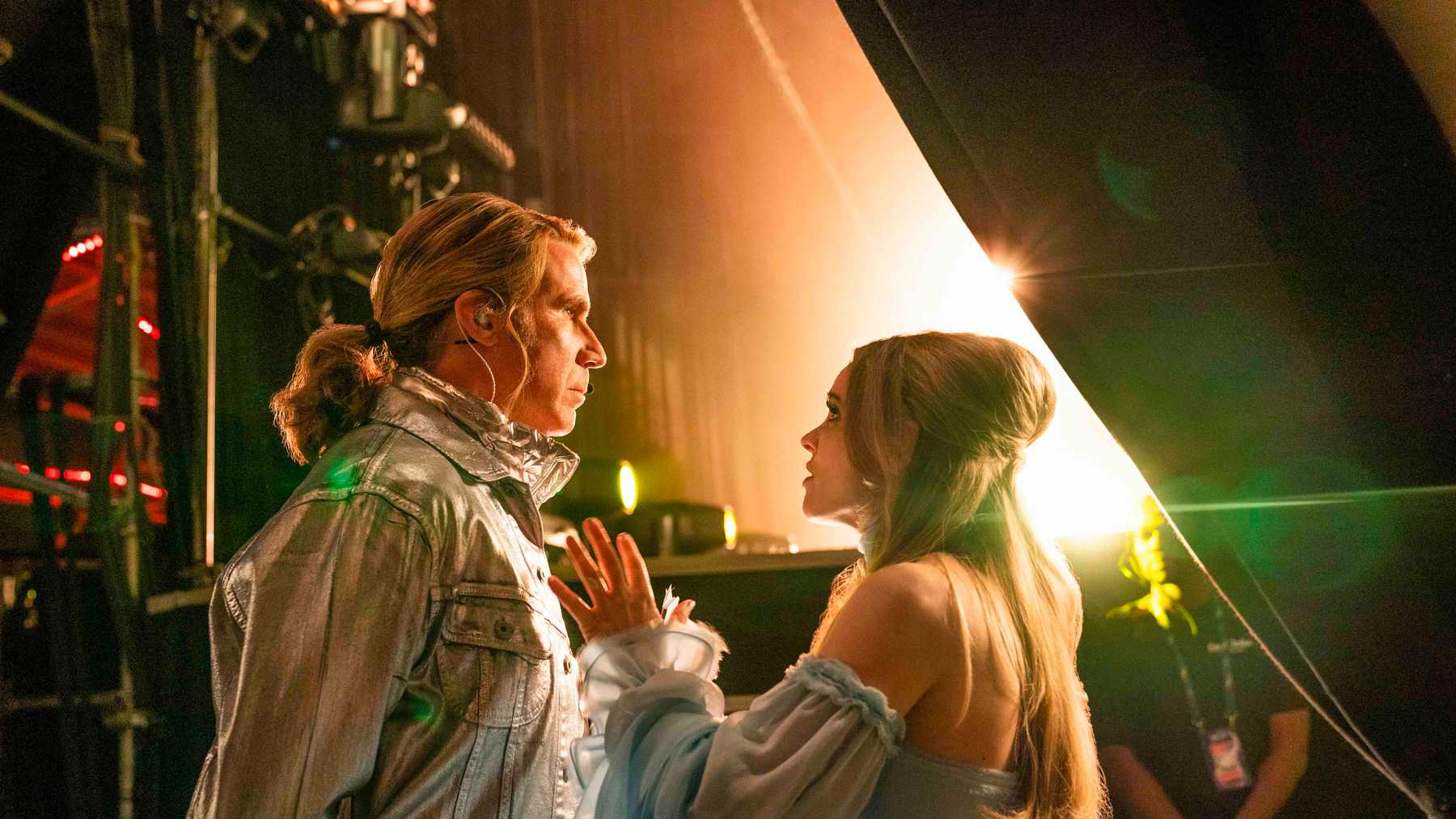 The actual 2020 Eurovision Song Contest was supposed to be held in Rotterdam on 16th May (because The Netherlands won in 2019 when the competition was held in Tel Aviv) but the coronavirus forced cancellation as it would have been impossible to accommodate 42 countries’ performers and delegates while in lockdown. Eurovision Song Contest: The Story of Fire Saga was to be released to coincide with this annual celebration of sparkles and sequins, but it too succumbed to the pandemic, and now makes its appearance on Netflix on 26th June. It has been made “in association with the European Broadcasting Union” and is even allowed to make use of the official ESC logo throughout.

The film opens briefly in 1974 with a reminder of one of the greatest Eurovision winners of all time – Abba’s Waterloo – watched by young versions of Lars and Sigrit (who become Will Ferrell and Rachel McAdams when they are adults). This inspires Lars’ lifelong dream to win Eurovision; Sigrit is quietly in love with Lars. So far so predictable.

And so we embark with Lars on his quest to first of all be chosen to represent his country, and then on his progress through the semi-finals and finals of the competition itself. Along the way he meets a magnificently sleazy Dan Stevens as Alexander Lemtov, the Russian contestant with frosted tips, four male backing dancers and a rip-off costume who states, when asked, that he is absolutely not gay as there are no gay people in Russia, it’s not possible, no, no way.

The songs we hear throughout really do feel like they could easily represent their country in any given year – although not win – and the songwriting collaborators have done a magnificent job in producing exactly the right musical vibe. A particular mention for Molly Sandén, a Swedish Eurovision competitor over the years who is fantastic in undertaking Rachel McAdams’ singing for her. McAdams is totally on top of the lip-synching and is delightful throughout, bringing the same kind of comedic vibe that we saw in Game Night. Ferrell, on the other hand, suffers from the fact that his face is way older than his hair, and gives the impression of being ever so slightly ridiculous in a way that is not what Eurovision is about. It’s frivolous, yes, but not ridiculous.

For proper Eurovision fans, some things will irk – like the fact that the film shows the awarding of points during the semi-finals which just doesn’t exist, and the Swedish entry has more than the permitted number of performers on stage. That might be nit-picky for most, but purists will balk.

And so if you’re accepting of Eurovision even in a small way, it all comes down to how funny you find the comedy elements. In this respect, an American playing an Icelander (with a Swedish accent) telling Americans that they are not wanted in Iceland, and then making jokes about a Korean man’s pronunciation of English, is not something tremendously amusing – and particularly not in association with a competition which is all about uniting nations in an evening of sequins and entertainment. The means by which Lars and Sigrit get the chance to realise their dream is also something which goes way too far. I was expecting a silly premise and was ready to go with it, but the choice made here is not cool at all.

There are Eurovision cameos sprinkled right through the story, but there’s one particular scene in the middle which makes use of several Eurolegends and has clearly been designed for mega fans (no spoilers, but I loved it!). And I have to mention Mikael Persbrandt’s steely blue eyes and Ólafur Darri Ólafsson as the Icelandic TV executive – both smaller roles played to perfection.

I came away with the feeling that Eurovision Song Contest: The Story of Fire Saga is the view of an American who enjoys the entertainment of Eurovision since being adopted into a European family, but doesn’t really get why true fans love it the way they do. When it was finished, I needed a proper Eurovision fix, and headed straight to YouTube to rewatch last year’s competition. That’s what Eurovision is really about.

Eurovision Song Contest: The Story of Fire Saga is available on Netflix now.