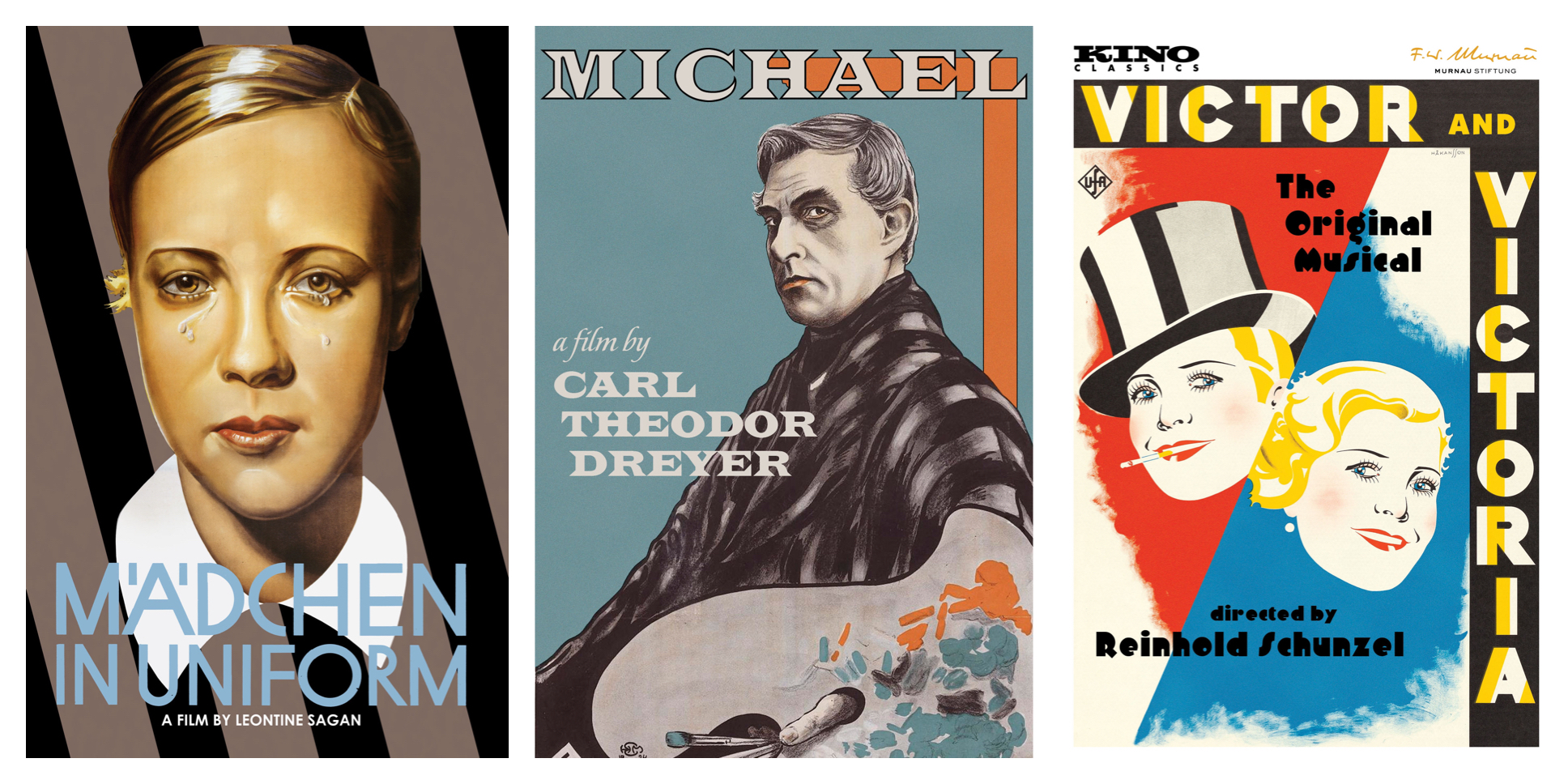 Three movies of early queer cinema – a silent film, a light musical, and one with an all-female cast – are released by Kino Marquee for Pride Month.

A package of three films available under the title Pioneers of Queer Cinema is the next offering from Kino Lorber’s Marquee banner. For Pride Month, Michael (Carl Theodor Dreyer, 1924) Mädchen in Uniform (Leontine Sagan and Carl Froelich, 1931) and Viktor und Viktoria (Reinhold Schünzel, 1933), classics of early queer cinema, have been beautifully restored and made available as virtual cinema – buy a virtual “ticket” and all revenue is shared between distributor and your local art house cinema.

Of the three, the title that will perhaps sound most familiar is Viktor und Viktoria. It’s the 1933 ancestor of Blake Edwards’ 1982 film Victor/Victoria with Julie Andrews in the cross-dressing role, and its subsequent 1995 Broadway musical. The opening of Viktor und Viktoria sets the scene in the world of stage entertainment in 1930s Germany, with the camera literally wandering through audition rooms as we meet our two protagonists. Viktor (Hermann Thimig) is a well-past his prime actor scraping a living from performing a vaudeville act, dressing in drag as a Spanish singer. Renate Müller is Susanne, an adequate but nervous singer who can’t get a break. Their paths cross, and it turns out that she is much more successful on stage as a woman pretending to be a man pretending to be a woman. While Müller doesn’t quite have the command of the suit that Dietrich had, nevertheless she’s very entertaining as she observes and copies how men sit, walk and behave as she tries to maintain her persona off stage as her success grows. There’s a feeling of freedom which befits a film made at the end of the Weimar Germany period, and yet a strange call-back to operetta and stage-shows; rather than just bursting into song at key moments as we expect from musicals, the two leads sing their dialogue at each other in a recitative style for large portions of the running time. It took a little getting used to. Viktor und Viktoria runs out of gay steam half-way through however, after ‘Viktoria’s’ secret identity is revealed (unbeknown to her) – then it becomes a matter of who knows what about whom until it’s all sorted out nicely and gender-binary by the end.

Mädchen in Uniform (Girls in Uniform) on the other hand is a 1931 film in which there are no men on screen at all. Orphan Manuela (Hertha Thiele) is sent to boarding school and immediately falls in love with her teacher Fräulein von Bernburg (Dorothea Wieck). While the teacher may reciprocate after a fashion, she is conflicted as she recognises that her role as teacher is incompatible with encouraging the affections of her student. The younger woman though, is much more open emotionally and longs to embrace her newly discovered feelings. It’s a film which takes seriously the nascent lesbian relationships in the school, despite the central one being limited by the teacher/student dynamic. It also presents as an anti-fascist polemic (this is Germany in 1931, remember) with the implementation of rules and regulations by the old guard in the school being the oppression of vivacity and youth. The ending hints at something much more positive than that which was actually to come in the following 10 years in Germany.

Michael, the third and oldest of the three is a silent film from the Danish director Carl Theodor Dreyer who was at the time working in Germany. Although one of Dreyer’s earlier works, it already has some of the flourishes that would become his trademark – close ups, use of lighting, precise and intricate set decor. Although the homosexuality is not overt, it is clearly implied and cannot be overlooked. The eponymous Michael (Walter Slezak) is a would-be artist who is adopted as a muse and model by an older artist Claude Zoret (Benjamin Christensen); as the artist ages, Michael grows tired of him and is lured away by a beautiful Princess with ulterior motives. It’s an incredibly sad and delicate story of lost and unrequited love, and is visually gorgeous. The particular contrasts between the living quarters of Zoret and Michael tell a lot about their different lives and personalities, and it’s not difficult to imagine the colours even through the 1924 black and white images.

These three films are definitely worth watching for several reasons, seeing queer stories on screen from the 1920s and 30s is one, the historical aspect of the availability of films from Weimar Germany is another. The fact that they have been so well restored is the icing on the cake!

Pioneers of Queer Cinema will be available in virtual cinemas beginning on June 12th. See the Kino Marquee site for more information.