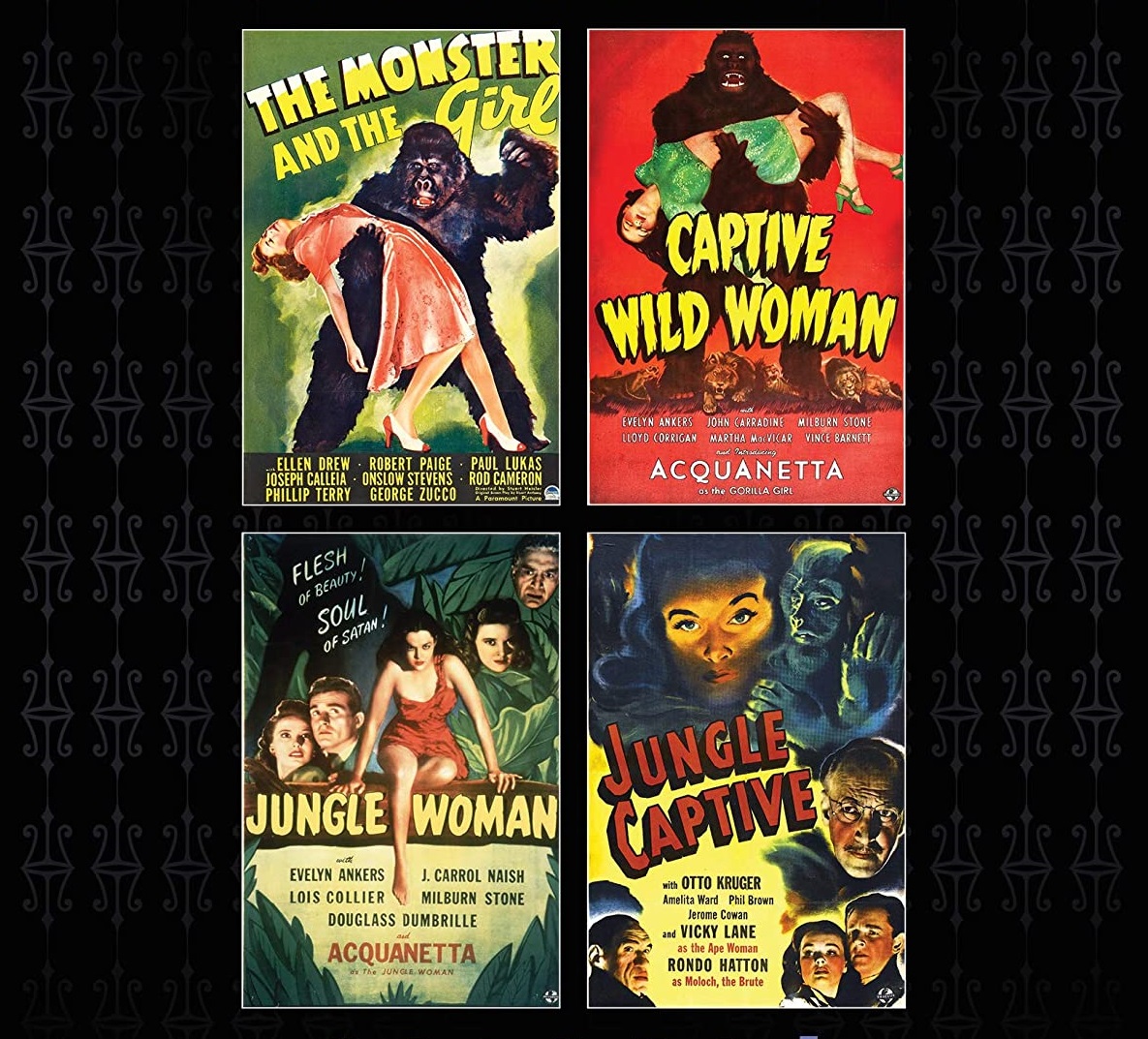 The Monster and the Girl

A clever Film Noir, Mad Scientist, Revenge story all rolled into one.  After Scot Webster (Phillip Terry) is framed and convicted to death for killing a man who forced his sister (Ellen Drew) into Prostitution, Webster is given the chance to help science with his body.  That helps happens to be his body transferred into the body of a Gorilla.  Yes, you heard that correct.

Once in the body of the Gorilla, Webster escapes and sets to hunt down the gangsters that framed him.  The best part of the film is the way that it’s told with the utmost sincerity and seriousness by director Stuart Heisler from an adroit script by Stuart Anthony.  Heisler manages to create a few stand out moments like the montage of the surgery transferring Webster’s brain to the Gorilla’s body.  It’s a gonzo concept done with the right amount of style.  The best of the bunch.

Acquanetta is the sole reason to watch this Z-Grade piece of lunacy.  You’ll have to forgive the ample amount of animal abuse on screen if you’re going to get through this one.  The story is about a Circus, a Mad Scientist testing on animal-human hybrids, and the love story between a lion tamer and a woman.  It’s all very of the era.  This is an early entry into journeyman Director Edward Dmytryk filmography, and it does not really show any of the “style on a budget” that Dmytryk was known for.  Acquanetta as the Ape-Woman is the main attraction here.  Her work is magnetic even if everything else is just passable, the wordless performance.

The sequel to Captive Wild Woman that spends 20 of its 62-minute run time with clips from the first film essentially recapping the events of the first film.  Once the film does start it manages to be more entertaining than the first with a love triangle between’s Acquanetta’s Paula aka Ape-Woman and the dim blub (Richard David) paramour to the scientist’s daughter (Lois Collier).  Be warned there is an absolutely wild un-PC performance by Eddie Hyans here that many will wince at.  That said, it manages to be an engrossing entertaining piece of lunacy.  Acquanetta is given more to do here and is the best part of the film as both the most sympathetic character but oddly framed as the film’s tragic villain.

The third of the ape-woman films finds them loosing it’s the MVP of this series, Acquanetta for Vicky Lane.  Acquanetta’s loss is apparent from the beginning.  The film takes its cue from The Monster and the Girl as it mashes Film Noir and Mad Scientist genres to good effect.  This time a scientist frames his young assistant for crimes he didn’t commit.  The best part of the film is the appearance of Rondo Hatton.  For those unfamiliar with Hatton’s many film appearances and striking appearance may recognize his visage as the inspiration for Lothar from The Rocketeer.

The Monster and the Girl

The new 2K Scan of A Fine Grain Film Element is nothing short of spectacular.  The restored black and white image is beautifully rendered on Blu-Ray.  The grain structure and sharpness are gorgeous.

This is the most troublesome of the lot.  It has not been restored and my thought is because of all of the images of animal cruelty on display.  The transfer does contain quite a few scratches and blemishes.  It’s an acceptable image but nowhere near the quality that the other three films have been restored too.

The new 2K Scan of A Fine Grain Film Element is like The Monster and the Girl nothing short of spectacular.  The restored black and white image is beautifully rendered on Blu-Ray.  The grain structure and sharpness are gorgeous. There are a few dips in quality but that’s the nature of the footage and not the quality of the restoration.

The new 2K Scan of A Fine Grain Film Element is nothing short of spectacular.  The restored black and white image is beautifully rendered on Blu-Ray.  The grain structure and sharpness are gorgeous.  The film looks so good it points out some of the terrible day-for-night effects used in the film.

DISC ONE: THE MONSTER AND THE GIRL

Each of the commentaries hosted by various historians are fantastic accompaniments to the films.  Each by Tom Weaver, Steve Kronenberg, Gregory Mank, and Scott Gallinghouse give historical context, fun fact, and loads of insight into the productions, the directors, writers, and stars of the films.  If you found yourself wondering how these films were made, please listen to these tracks as they will give you a ton of information on that.