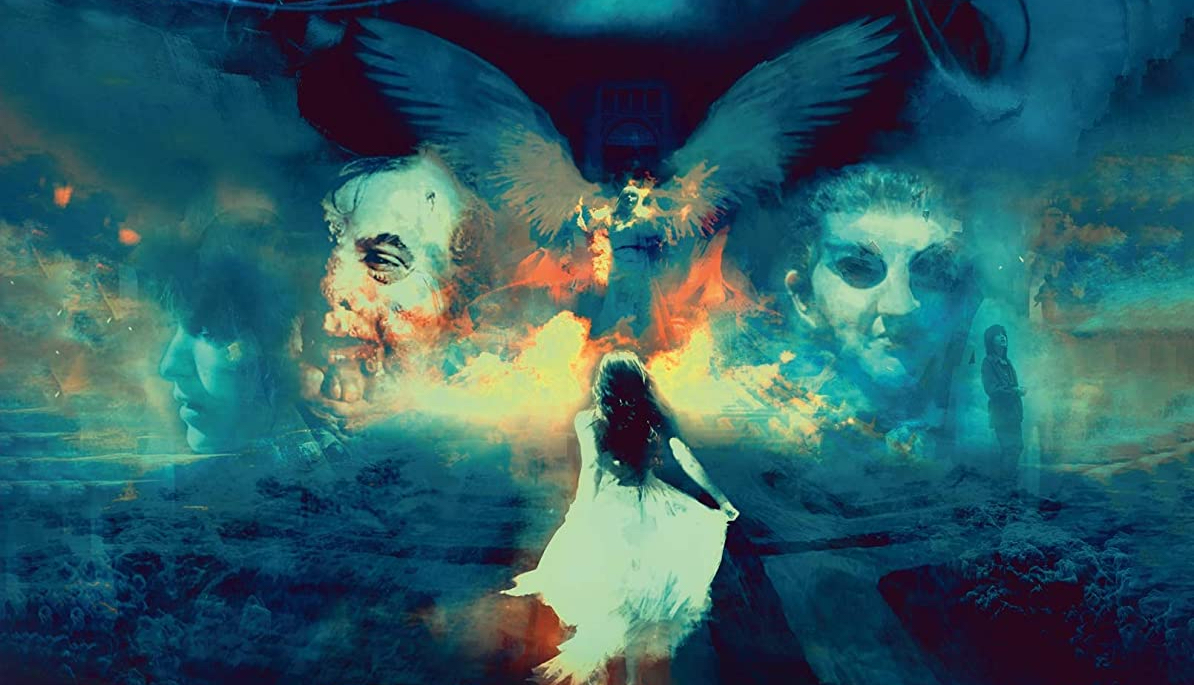 All the stops have been pulled out by Arrow Video for Harley Cokeliss little-seen horror fantasy gem; Dream Demon.  Sporting an all-new transfer, director’s cut, and a wealth of extras. The film has its best foot forward on this Blu-Ray release.

To put it bluntly; some movies surprise the shit out of you.  Harley Cokeliss’s films have that effect on me.  Cokeliss’ horror fantasy Dream Demon is a first-rate forgotten film that just because it’s been forgotten does not indicate a lesser quality film.  Armed with a newly found director’s cut the film is a case in discovery.

On the eve of her wedding to a war hero Diana (Jemma Redgrave) begins to have the most vivid of nightmares.  Haunted by these living nightmares, making matters worse are a gossip columnist and his leech of a photographer (an early Timothy Spall supporting role).  Oliver (Mark Greenstreet), husband-to-be, is apathetic, to say the least.  The only support Diana is given is in the form of an American stranger (Kathleen Wilhoite) who witnesses these living dreams and becomes a partner in Diana’s quest to figure out what is happening.

These types of entries into the Horror Fantasy genre are only as strong as the story and acting will allow.  Redgrave and Wilhoite are standouts as the co-leads of the film. Both actors take the material with the right amount of seriousness that makes the film work. The actor’s chemistry is an added bonus.  Few films take the time to allow females to work together let alone be friends.  Part of the heart of the film is how these two women help one another and most importantly believe each other never working against.

Most importantly the film works terrifically as a horror entry.  The set pieces are genuinely terrifying with some great Make-Up FX work (of course Spall is the main recipient of said work).  Dream Demon is definitely a surprise waiting for fans of horror.

NOTE: Review is of the Director’s Cut

The brand new 2K restoration from the original camera negative supervised and approved by director Harley Cokeliss is again strikingly perfect.  One could almost take for granted the amazing work that Arrow Video is doing with their releases.  Their restorations are on par with car, time, and beauty that Criterion Collection brings to their work.  This transfer is no different than their best work.  The transfer looks like a beautiful archival 35mm print.  Bravo, to Arrow Video with the care they take in both finding and restoring these elements.

Scene-specific Audio Commentary by Harley Cokeliss producer Paul Webster runs 46-minutes.  Beginning with how the film began as a UK-Based rip-off of Nightmare of Elm Street and how Cokeliss became attached the duo, recorded together, to a great job of discussing the film. They discuss the casting of Jemma Redgrave, the gore, the nightmare dreamscape, the photography, the sexual politics, tabloid press, how Princess Diana’s marriage played a part in developing the story, and so much more.

Original Theatrical Version (1:29:23) – the theatrical cut comes up under the special features. Though the theatrical is longer (by comparison the director’s cut is 1:28:08), the preferred cut is the one that Cokeliss recently created and is the main feature. Though Arrow has given the theatrical cut its best foot forward by sourcing it from the same master the Director’s Cut.  The differences between the cuts are very slight but the biggest change is the ending which, is tonally different.

Dream Master – is an all-new 27-minute interview with co-writer and director Harley Cokeliss.  Cokeliss discusses how he became attached to the film, how the casting came about, how the film was shaped, things that were filmed ultimately cut, storylines that were dropped, the score, the release and how it was fumbled in the US because of some financial pratfalls and how this informed on how the film has gone missing from the US Market.  Much of the detail and detective work that was done, much of which was done by Cokeliss did himself, to find the ownership of the film, the film elements, and finally the recutting, restoration, his director’s cut with the new ending.  It’s a great companion piece to the Scene-specific commentary by the director.  Of note, whenever Cokeliss does discuss a deleted scene they do show stills of the scenes.

A Nightmare on Eton Avenue – is an all-new 37-minute interview with producer Paul Webster.  Beginning with his origins, and a funny anecdote about not taking a job at the bar where a week after would host the first Sex Pistols show. Webster definitely has had an interesting life in Film production which lead him to Dream Demon.  Great tidbits include how he came to purchase A Nightmare on Elm Street after a terrible screening.  The producer finally does get to Dream Demon with wonderful notes like previous iterations, the story and how it was developed, directors that were attached, casting, production, effects work, and just about everything else. Like Cokeliss’ interview, it’s a great accompaniment to the Scene-Specific Commentary.

Dreaming of Diana – is an all-new 16-minute interview with actor Jemma Redgrave.  Redgrave discusses her beginnings which is tied to Dream Demon as it was her first film.  It’s a great interview with a discussion about how Cokeliss worked with her, the Princess Diana Connection, the production, and a lot more.  Note, there are some great references to deleted storylines that they do show stills from the deleted moments.

Cold Reality – is an all-new 9-minute interview with actor Mark Greenstreet.  The actor that plays husband-to-be Oliver.  Greenstreet complementing the film being a non-Merchant Ivory film and how it was a genre film rare done at the time.  Great tidbits include that he test for Bond at the time that Dalton eventually won out, the way that Cokeliss worked, the production, working with Redgrave and Spall.  It’s a great bit of an interview with a huge amount discussed about the Continuity person.

Sculpting the Part – is an all-new 9-minute interview with actor Nikolas Grace.  The actor has a small role as the father/sculptor in the film discusses how he became interested in acting.  Tidbits include how his work in Brideshead Revisited (the one from the mid-80s, as many UK fans, will know its an oft-adapted novel) and more.

Angels and Demons – is an all-new 9-minute interview with actor Annabelle Lanyon.  Lanyon is the younger actress at the center of Dream Demon.  The Actor discusses her origins as an actress by way of dancing/ballet that begat acting.

Demonic Tones – is an all-new 15-minute interview with Composer Bill Nelson.  The Musician turned Composer discusses how a recorded an instrumental album that leads to work Commercials then eventually to Film.  Nelson discusses how Cokeliss approached him and how he worked with the director to put together his first score.

Foundations of Nightmare: The Making of Dream Demon – is a newly created 26-minute behind-the-scenes documentary featuring archival interviews with director Harley Cokeliss, producer Paul Webster, actors Timothy Spall, Jemma Redgrave, Kathleen Wilhoite, composer Bill Nelson, and others.  The featurette is composed and created from what appears to be a wealth of Video b-roll footage shot on set and long-form Interviews.  Things like off-the-cuff remarks by Spall as he gets his makeup done, or Cokeliss between takes being honest about his approach, is just flat out great. Not just a simple cobbled together featurette, Arrow Video has managed to put together a modern behind-the-scenes making-of documentary from Video footage at the time.  The results are striking and possibly the most unique behind-the-scenes making-of that will be released this year.

Rounding out the special features is the fully restored Original Theatrical Trailer (1:56) and two Image Galleries (Promotional and Behind-The-Scenes).  The Promotional Gallery consisting of 18 images from VHS Covers and Lobby Cards.  The Behind-The-Scenes Gallery consisting of 54 various black & white stills, color stills, and color polaroids.  Both galleries can be navigated through by using the Chapter Skip Button on your remote.

Arrow Video has another winner on their hands with Dream Demon.  The disc is brimming with extras and a beautiful transfer.  HIGHEST POSSIBLE RECOMMENDATIONS!!!