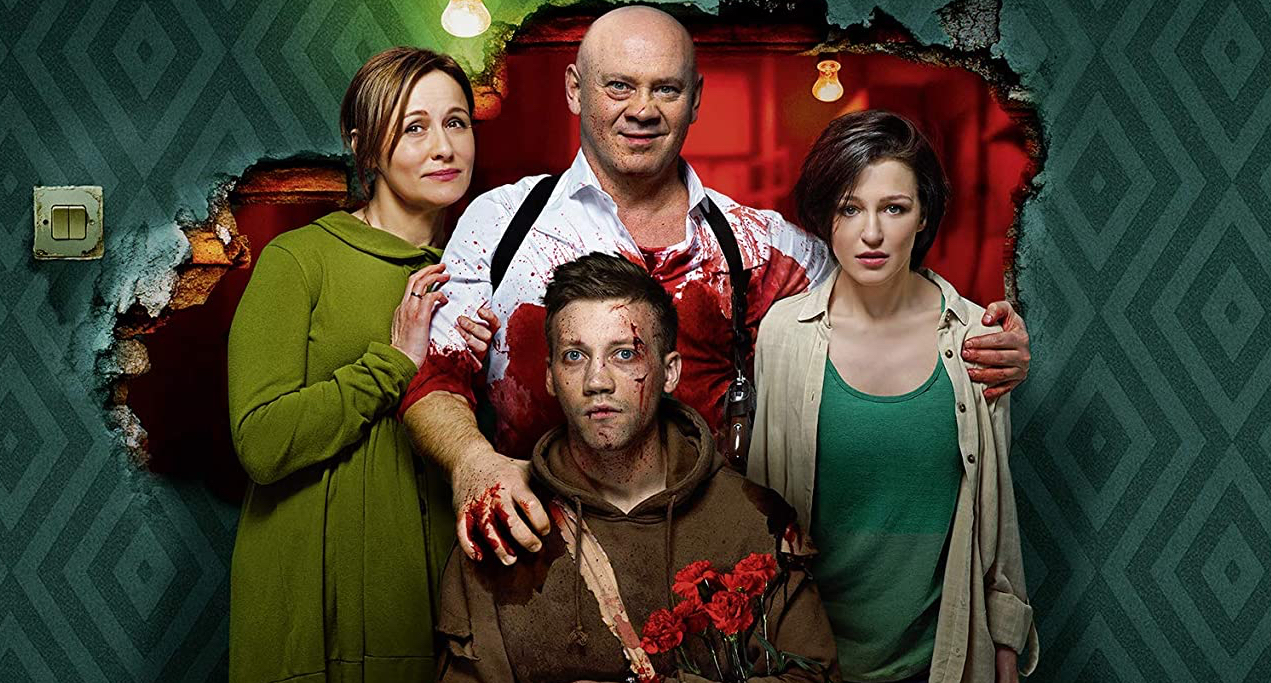 If you like your movies darkly comedic, gory as fuck, and stylishly in the Neo-Noir genre this Why Don’t You Just Die! may be your cup of tea.  If you like your tea laced with arsenic. Be warned when I say this one is one of the bitterest pills one will swallow this year.

Police Detective Andrey Gennadievitch (Vitaliy Khaev) is one tough bastard.  His mettle is tested when his Daughter (Evgeniya Kregzhde) schemes to kill him and take all of his hard-earned corrupt money. Throw into the mix a willing boyfriend (Aleksandr Kuznetsov) and a disgruntled Partner (Michael Gor) is as explosive a Molotov cocktail this side of Moscow.

Kirill Sokolov’s debut feature is not about the story.  The story is a simple one that we’ve seen time and time again from luminaries of cinema like Danny Boyle (Shallow Grave), The Coen Brothers (Blood Simple), and Lawrence Kasdan (Body Heat).  With these sorts of Neo-Noir what separates them is all in how they’re told.  Sokolov’s film has got style and story sense to spare.

Writing, directing, editing, and storyboarding the entire feature himself, Sokolov acquits himself as a stylish army of one.  His film is as fun as it is bleak.  Why Don’t You Just Die! never feels bleak in the way that serious horror does.  There isn’t an existential dread rather a matter-of-fact way about how everything unfolds.  People die, people die.  Though deaths are never deadpan but rather as arched and stylized as anything you’d see in a Sam Raimi film.

Credit should go to willing and able compliances Cinematographer Dmitriy Ulyukaev, Production Designer Viktor Zudin who helped Sokolov’s vision (his intricate storyboards proved he really did plan everything out). The film is visually arresting in the way that the best debut features are. Taking the single location (well, almost single location) to its logical and adroit conclusion the film never feels claustrophobic or limited by budget.

Why Don’t You Just Die! is fast, energetic, dark fun for those that can handle an ample amount of gore (and I do mean ample).

Arrow Video has been provided a beautiful transfer that’s razor-sharp, colorful, and with the right amount of grain to make this shot-on-digital feature to look almost like 35mm.  Fans of the film will not be disappointed with the image quality.

Why Can’t We Just Leave – is an all-new 25-minute interview with Critic Kim Newman.  The featurette has Newman delving into the “single location” subgenre, Film Noir, Neo-Noir, Russian Cinema as a whole, the Russian Gangster in US Cinema, and how all this relates to Why Don’t You Just Die!  He also seems to drop about fifteen various films and even Twilight Zone Episode.  You’ll definitely want to rewind and get some of the more esoteric choices. As always Newman is great at connecting all of these various ties to the film giving you a lot of context for where Why Can’t You Just Die! falls in the pantheon of this specific subgenre.  So much, so one will want to watch the whole bloody affair again.

Behind the Scenes – 27-minutes of footage is broken down 6-segment that can be played individually or all at once with a “Play All”.

Some of the most fascinating stuff on the disc as the footage appears to be specifically shot for home video release (which is rarely done nowadays) and gives a sense of purpose for each featurette.  Though it is b-roll footage, everything a lot more polished than normal b-roll as it was intended to be seen by an audience.  If you are a fan of the film, you definitely will want to watch this.

Rounding out the special features are the Theatrical Trailer and the director’s Storyboards.  One should not sleep on the incredible storyboards by Sokolov.

Why Don’t You Just Die! is a great debut feature film.  Arrow Video has created a great introduction into the filmmaking world of Kirill Sokolov loading it with great special features and a collection of his short films.  HIGHEST POSSIBLE RECOMMENDATIONS!!!

Arrow Video’s Blu-Ray of Why Don’t You Just Die! is out now