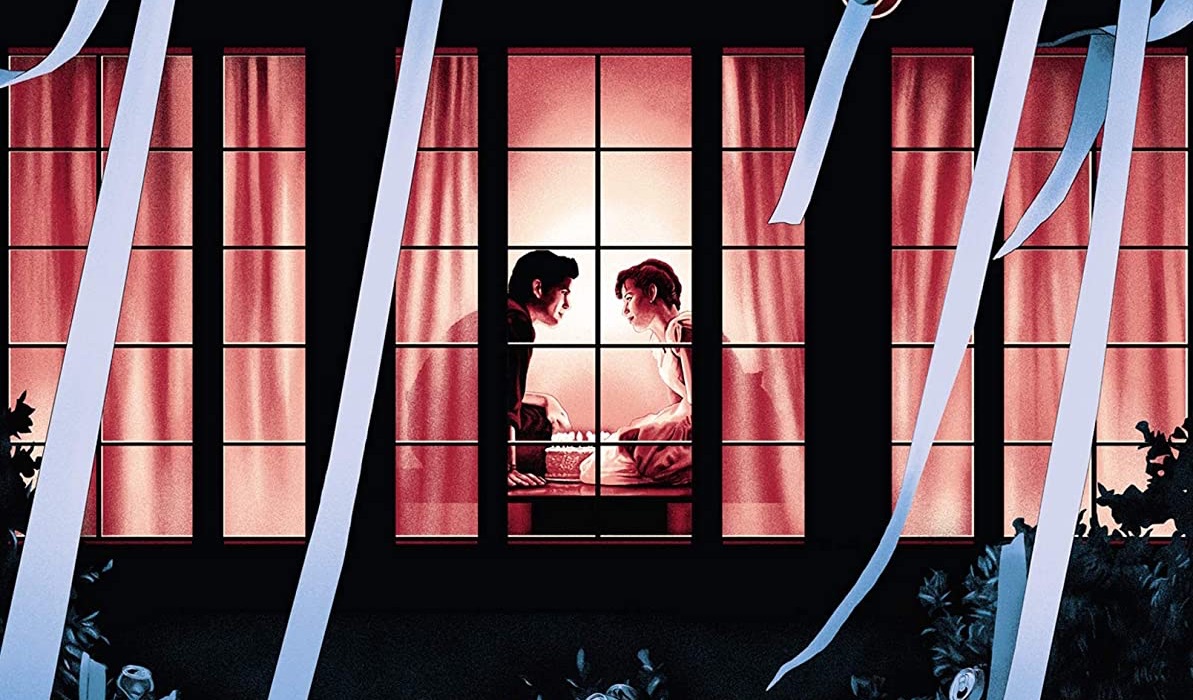 Adam is shocked by everything a PG-Rated John Hughes Film gets away with… and that isn’t even the stereotyping.  Breasts, a few F-Bombs, and more… its Hughes’ directorial debut Sixteen Candles.  Arrow Video’s Blu-Ray comes with all the trimmings and a beautiful transfer.

Sixteen Candles may have been one of the more complicated rewatches I have experienced in a while.  The biggest shocker is how the film would have been given an R-Rating any other time than in 1984.  I’m pretty sure this along with Indiana Jones and the Temple of Doom are the reason why the PG-13 rating was created.  All that being said, there is still a lot to love (maybe even as much as there is to question) in Hughes’s directorial debut.  What isn’t in question is the winning performance by Molly Ringwald.

On the day of her sixteenth birthday, Samantha aka Sam (Ringwald) just wants someone to pay attention to her and make her feel special on the supposed sweetest of birthdates.  This does not happen; she is ignored by her family too busy preparing for her sister’s wedding.  To make matters worse she thinks a questionnaire where confessed to liking Jake (Michael Schoeffling) gets into Jake’s hands.  It’s going to be a hell of a birthday with a Dance to go to, a party to attend, and a Wedding the next day.  All the while Sam is navigating advances from a character known as “The Geek” (Anthony Michael Hall), and a foreign exchange student (Gedde Watanabe).  Don’t’ worry like all Hughesian stories its more fairy tale than reality and the girl does get her stud, Porche 944 included.

One cannot understate how much Ringwald carries this film with her charm and star power.  15-years-old at the time of filming, the actress is a star in a star-making performance.  The power of Sam as a character is she feels like a real 16-year-old girl with 16-year-old problems and 16-year-old attitudes and points of view.

Many credit Hughes’s innate abilities to write teens for the power of his films… They’re only partially (maybe 22%) correct.  The power of his films comes from the amazing cast.  Ringwald being his biggest asset/find but Anthony Michael Hall aka “The Geek” is just as much a find here as she is.  National Lampoon’s Vacation shows Hall as a scene-stealer with impeccable timing.  Here Hall obliterates everyone around him, including Ringwald.  The Geek, if not for one questionable scene, is the highlight and delight of the film.

Many, including this reviewer, will find it troubling that jokes are made about date-rape and Asain stereotypes.  One can write it off as just, “it was the 80’s”.  Many will not.  Naming a character Long Duk Dong is not just insulting, its racist.  Yes, Gedde Watanabe is a comedic assassin but the racial insensitivity is just plain insulting from the Name to his ability to drive to his perviness.  Same for the date-rape.  There is a scene between Jake and the Geek negotiating terms that date-rape is a possibility.  Yes, it turns out okay I guess at the end, but many will find this possibly cringe-inducing.

For those that don’t make Sixteen Candles an annual rewatch, may find this a shocker in our current era.  Others will just wave it off with the aforementioned “it was the 80’s”.  That being said there are moments of pure entertainment, albeit a little dirtier than the PG-Rating would ever let you get away with now.  Maybe, that’s what makes Hughes’ debut so enduring.  Made at a time that it could get away with so much, being an unassuming teen-comedy.  Much like a teenager in the throes of the dramatic hormonal dissidence of high school.

This release comes with a new restoration by Arrow Films from a 4K scan of the original negative.  Fans are in for a real treat.  Arrow has done it again with this amazing transfer.  The film has always been a bit troublesome on home video. Here the contrast, black levels, and color reproduction have all been perfected.  The image looks razor-sharp with a beautiful sheen of grain that gives the transfer a filmic look, no DNR to speak of.  This may end up being one of the best transfers of the year.  It’s that good.

Additional Scene – is a 90-second scene set in the cafeteria that gives context and shows us, Jake, reading the letter. Also, Sam’s whole carrot diet is played out.

Home Video Version – a third version of the film!!! A huge-huge compliment to the Label for getting the right and going through all the trouble of getting the rights to this version. This is the version I remember fondly watching as a kid with its musical queue. It was only during its DVD release that I along with countless others heard the original soundtrack (unless one saw an original print at a revival house). Note this is presented in the same hi-def format as the other two versions. No worry about it being from an SD Source, which will be a drawback for some.

Casting Sixteen Candles with Jackie Burch is an all-new 9-minute interview that discusses how she got the role of casting director and how each of the roles was cast. The interview is more of a visual essay with Burch commentating over behind the scene photos and scenes from the movie. From casting primarily in New York to Gedde Watanabe joking that he didn’t speak English to Viggo Mortensen almost being cast to Hall and Ringwald already been cast a lot is discussed.

When Gedde met Deborah with Gedde Watanabe and Deborah Pollack is an all-new 19-minute interview with the actors (both filmed together). They discuss the casting, meeting, and production of Sixteen Candles. The two actors have a great time, and lots of laughter, talking about anecdotes such as making Pollack taller, Watanabe making more money in his first week as he did the entirety of his Broadway career up until that point, someone farting, Gedde being 30 when they filmed the movie, and their enduring friendship.

Rudy the Bohunk with John Kapelos is an all-new 6-minute interview with the actor who plays the soon to be Husband of Sam’s sister. Kapelos discusses how the role evolved from WASPS into more of a Chicago mobster. How he got the role and his relationship with John Hughes and more.

The New Wave Nerd with Adam Rifkin is an all-new 8-minute interview with the writer-director who at the time was an extra in Sixteen Candles. Rifkin recounts how the film was being shot at his shoot and how he had to dress either “tough” or “nerdy”, how he chose his toughest clothes only to be personally cast, by John Hughes, to be head nerd. It’s a great recollection, with a bunch of shots of his part (which is as a featured extra) and how Rifkin got to shadow Hughes during the production once his role was finished.

The In-Between with Gary Kibbe is an all-new 8-minute interview the Director of Photography, who was the Camera Operator for Cinematographer Bobby Byrne. Kibbe discusses how came to be a camera operator on the film and his history beginning in Hollywood literally in the mailroom. The best part of this technical-based conversation is a discussion of what a Camera Operator does and how he worked with Hughes.

Music for Geeks with Ira Newborn is an all-new 8-minute interview with the composer. Newborn discusses his first collaboration with Hughes and his very adroit theories on needle drops, composing, and dialog along with other tidbits about the director and this production.

A Very Eighties Fairytale by Soraya Roberts is a 17-minute visual essay about Sixteen Candles. Roberts discusses the creation, production, and the thematics of the film. The critic does a great job of giving context to the film and the political era that Hughes created the film in. The most interesting aspect of this visual essay is how Roberts is able to dissect Hughes’ Conservative political/sexual/financial views and how he was an Ad Man in Chicago would effect this film and other films he made. She even discusses the rating board snafu with showing breast and F-Bomb. Its great powerful video breaking down some of the myths and mythos created by the Hughesians Fanbois that these are wholesome charming films.

Celebrating Sixteen Candles is a 38-minute archival making-of from the Special Edition DVD Release. Features just about everyone involved with the film all but of course Molly Ringwald and John Hughes. It’s a bit fluffy at times but it’s also a great making-of with some great comments by Diablo Cody about the film and the thematics, additionally Anthony Michael Hall discussing his work and Hughes in the film. It does its job as it’s a very glossy and fun look at the movie and its legacy.

Rounding out the special features is a Teaser (90-seconds), Trailer 1 (3-minutes), Trailer 2 (3-minutes), 2 TV Spots (30-seconds each), and a whopping 18 TV Spots (14-minutes). The trailers and TV Spots are essentially the same variation of the trailer’s initial theme just different music (from the Ira Newborn’s score to Sting’s Every Move You Make). The Radio spots are hilarious as the narrator keeps saying “… is going to help SCREW UP Samantha’s Sixteenth Birthday”. The radio spots are all the same format of introducing a character in the film in a “whacky” way.

Shooting script: the final draft of the script for your reading pleasure. It does state some of the pages are missing but it appears to be non-essential. It’s great if you’ve never read a Hughes script to take a look at how they’re built. A nice unexpected edition. You navigate the script by pressing the play button to move the next slide.

Production Stills: 100 various production stills and lobby cards make up this gallery. You navigate the photos by pressing the play button to move the next slide.

Poster and Video Art: 17 photos and stills from video cover art. Some of the stills are the original photos without the typeface on it. Poster art from different counties. VHS covers. DVD covers. You navigate the posters by using the play button to move the next slide.

Arrow Video has done a fantastic job with their release of Sixteen Candles. This is a Strong Recommend and Highly Recommended for the John Hughes Super Fan.