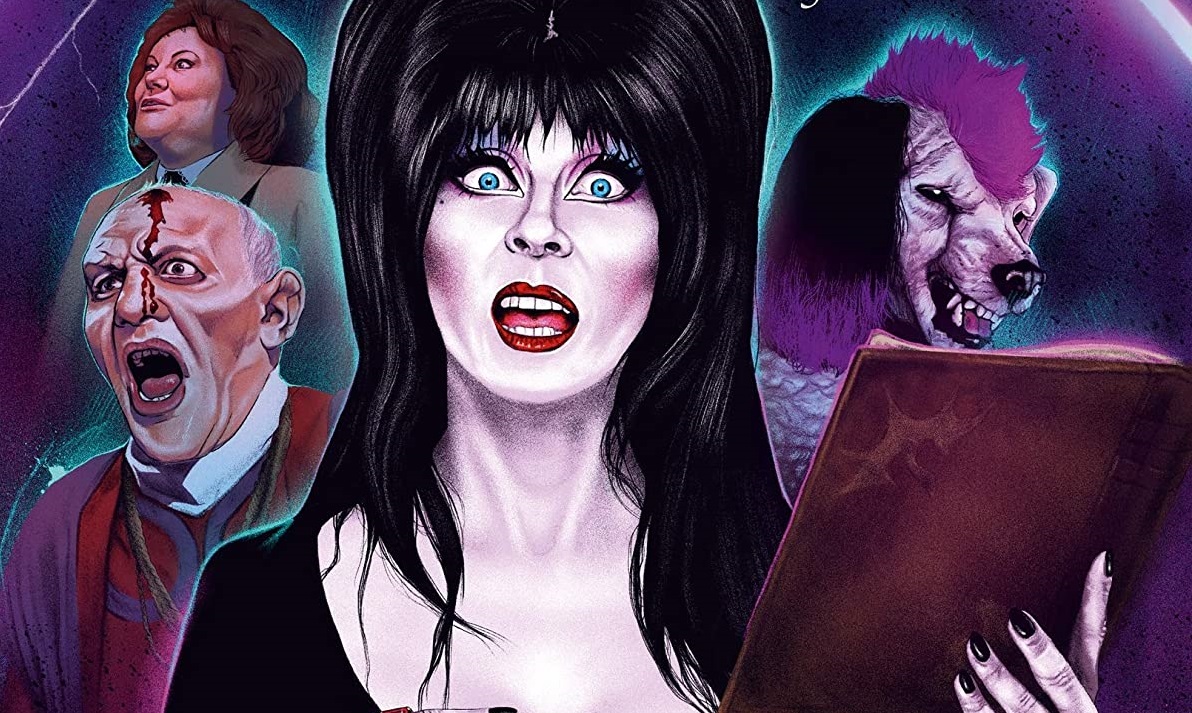 Adam looks at Arrow Video’s Blu-Ray edition of the Cult Favorite Elvira: Mistress of the Dark. Beautiful picture and lots of extras but can the film make new fans?

What could have been?  Often projects that begin with promise end in a muddled mess.  Such is the development process.  Elvira: Mistress of the Dark makes so many wrong-headed moves that make what could have been a Pee-Wee’s Big Adventure-style movie settles for less.  Though the campy charm of the Character is never lost.

Elvira (Casandra Peterson) quits her job as host of Elvira’s Movie Macabre because her new slimeball boss is a Roger Allies-type. Just in the nick of time, Elvira learns that her aunt has left her an inheritance that could get her the Las Vegas Showgirl act that she’s always dreamed of.  Cut to Elvira going to Fallwell, Massachusetts to get her claim, cash out and head to Vegas.  Well, things so close to Salem are never that easy. Enter a conservative town that any MAGA alumni would love, horny teens, a dopey love interest, and an evil Warlock Uncle… Hijinks ensue.

Many of the issues stem from the script written by Peterson, Sam Egan, and John Paragon.  The tone is so arched someone must’ve pulled an eyebrow muscle.  The clichés come hard and fast.  Every single character, especially the teenagers are so cardboard they would make better uses as storage boxes.  Nothing in the film has any life or originality.  It does not help matters that James Signorelli directs the film with all the style of an episode of The Golden Girls.

One can see what Peterson wanted for her character.  A fitting launch of a Film or TV series.  Something left of center like her Groundlings compatriot Paul Rubens’ Pee-Wee Herman’s character.  Both spent large amounts of time at the Improv Group refining their characters and even putting them on TV.  The biggest difference was Rubens had a Studio that believed in his work and a young director (e.g. Tim Burton) who was a wildly talented stylist.  Unfortunately, none of that happened for Elvira and the film. It’s too bad because the possibilities are there for something truly special, and still is.

Who knows maybe this is a franchise ripe for rebooting.

The movie may not be great but the brand new restoration from a 4K scan of the original interpositive is nothing short of spectacular.  Arrow Video has created a transfer that is the best that Elvira has ever looked.  The Contrast and Black Levels are balanced giving a film that’s mostly shot at night a beautiful look.  The grain structure and sharpness give this release a razor-sharp but filmic look.  Fans of this film will be delighted by the film’s look on Blu-Ray.

Audio Commentary with Cassandra Peterson, Edie McClurg, and John Paragon. This is not a serious track but it’s very lighthearted and informational. There is some description of what’s going on the screen but not to a distracting degree. There is an easy chemistry between the three. Cassandra aka Elvira does give us some great anecdotes from her Movie Macabre the real show she did in LA during the 80s.

Audio Commentary with Patterson Lundquist. Lundquist is the “webmaster” for Elvira.com and one of the hosts for a show called “The Next Elvira”. Lundquist makes commentary does give some pretty interesting trivia and information about the production but has a lot of dead space.

Director’s Intro, I’m unsure if this is a joke or what but this is pretty painful to watch James Signorelli push through trying to do this intro.

Too Macabre – the making of Elvira Mistress of the Dark. This is a feature-length making-of (clocking in at 97-minutes) how the movie came to be. The making-of starting with what could have been a TV-Sitcom, the barrier that stopped them from going from that to making a movie. The feature gives some great anecdotes like Brad Pitt auditioning for one of the characters, discussion of the production scene by scene, the various makeup and effects scenes (notably the Explosion at the beginning of the scene), the troubles and arguments with the budget and the ending (the Vegas show finale) and how it came together during post-production, the release (the insane premiere), its box office failure and cult status today. The doc features interviews with actors Casandra Peterson, Kris Kamm, Edie McClurg, Ira Heiden, Daniel Greene, Susan Kellerman, William Morgan Shepard, Writers Sam Egan & John Paragon, Director James Signorelli, Producer Eric Gardner, Makeup-Effects Artist

Recipe for Terror: The Creation of the Crock-Pot Monster is a 22-minute featurette on the creation of the Pot Monster, not what you think, which was not discussed during the making-of feature. They do discuss other effects but the primary focus is the design and execution of the monster. Featuring interviews with Director James Signorelli, effects artist Steve Laporte, Yancy Calzada, and Larry Nikolai.

The image galleries are broken down into 6 different sections.

Rounding out the special features are a Theatrical trailer (2-minute) and Theatrical Teaser (1-minute).

Arrow has loaded this set with extras.  Elvira fans will delight.  All the same, the film will not make any new fans or cultists to this film.  Recommended for Fans only.

Arrow Video’s Blu-Ray of Elvira: Mistress of the Dark is out April 28th