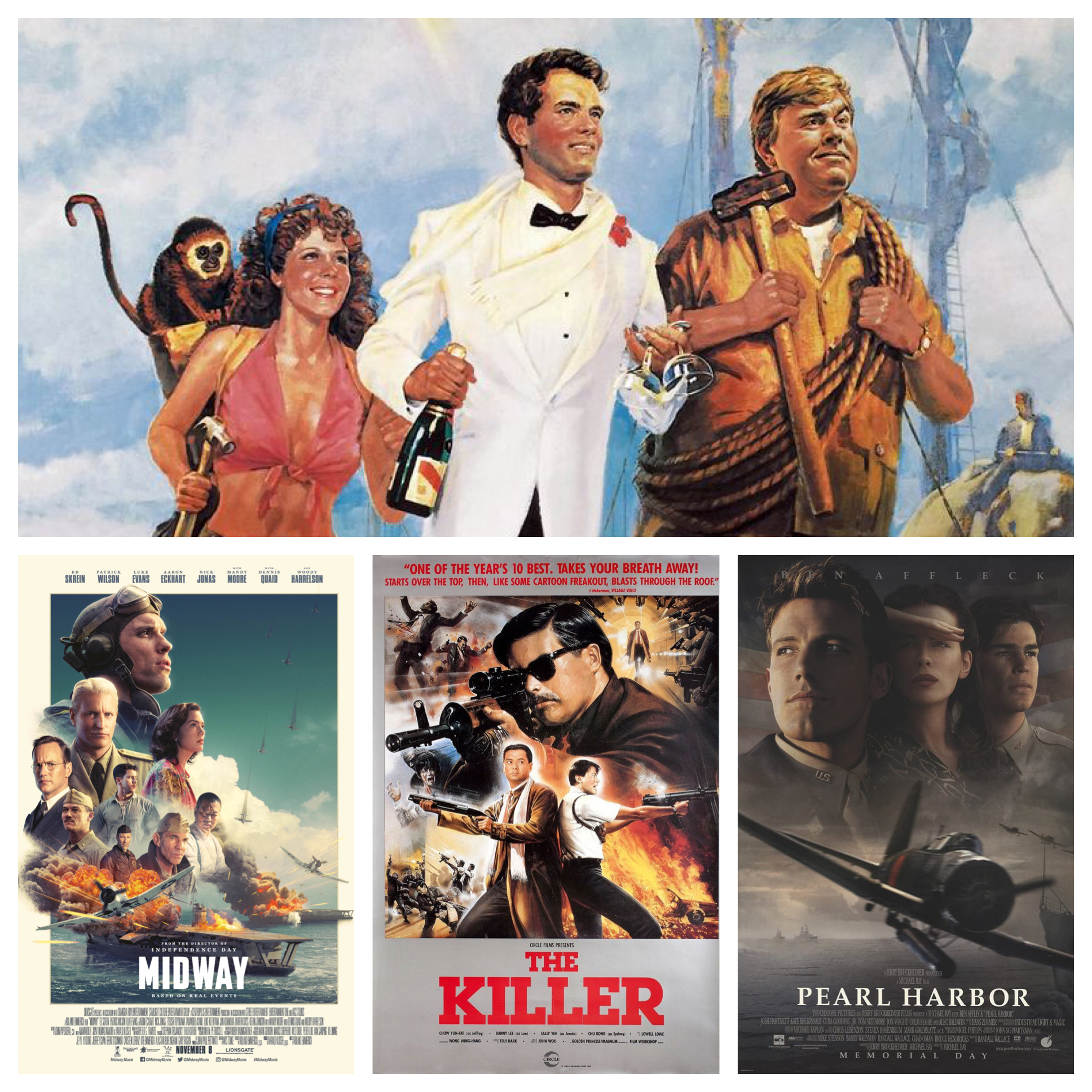 Adam’s back with a look at Tom Hanks (then and now), Assassins in films, and the facing off of two titans of Blockbusters with a decision on who wins.

A Tale of Two Tom’s (Hanks)

A Wonderful Day in the Neighborhood (iTunes/Amazon/Vudu, 4K UHD, Blu-Ray)

This isn’t what you’re expecting. The best part of the films is that it’s not an A – to – Z biopic but rather a film that takes a sideways entry to its subject.  When someone as saintly as one Fred Rogers is your subject the smartest way to tell the story is through another person’s gaze.  The film is all-around smart emotional filmmaking that is rarer and rarer these days coming from studios.  Marielle Heller hits this one out of the park.  The film is stylish in an unexpectedly adroit way that never calls attention to itself but feels wholly a part of the mind of Fred Rogers.  Tom Hanks is just amazing here.  It’s not an imitation or some gimmick but rather Hanks doing what he does best.  At this point it’s not that Hanks is his generation Jimmy Stewart, Hanks is Hanks.

Of the early Tom Hanks films, Volunteers is my favorite.  For the last five years (or as long as I have had HBO) I’ve made it a point of watching this Hanks-starrer. The Nicholas Meyer adventure comedy has Hanks stars as Lawrence Bourne III a ner-do-well charming asshole complete with the accent to prove it who in 1962 because of gambling debts trades places with his roommate (an early Xander Berkley performance) in the Peace Corps. The film follows a sort of Bridge on the River Kawi model as the Peace Corps intends and does build a bridge.  Trouble comes knocking when the Chinese Communist and Thai Drug Kingpin enter to ruin it all.  In the center is Hanks aided immensely by Gedde Watanabe as his right-hand man in Thailand who suffers none of Hanks’ charming bullshit.  James Horner’s score kicks so much ass it’s not even funny.  Yeah-yeah-yeah, I know it’s where Hanks and Rita Wilson met.  Their chemistry is good but Hanks and Watanbe’s chemistry is soooo much better.

An Assassin by Any Other Name is still an Assassin

Luc Besson must’ve watched Atomic Blonde and said, “damn, why didn’t I make that”.  Then, he proceeded to make his version of Atomic Blonde.  But to cloak the whole thing he thought “I’ll set it in the 90s this way no one will know!!!!” cue French-laughter.  Unfortunately, the movie isn’t nearly as good or entertaining as Atomic Blonde.  Besson’s movie thinks it’s being clever when all it’s doing is just being confusing for confusing sake.  The Sexy-Russian-Spy-Is-Recruited-Then-Needs-To-Find-A-Way-Out-So-She-Double-Crosses-Everyone plot is as trite as they come.  Even back when he did it with La Femme Nikita is was pretty stale.  Here now he’s added a bit of rape to the proceeding… thanks, Besson.  Just what we needed.  Pass on this movie.

For a solid minute, John Cusack was a thing… not just a thing but kind of a big deal.  Grosse Pointe Blank is quite possibly his piece de resistance.  Written by Cusack and his buddies, the film finds Lloyd Dobbler (nee Martin Blank) skipping out of Senior Prom and signing up for the army.  Cut to ten years later Blank is a contract assassin with a crisis of conscience.  He’s dealing with botched jobs, the competition (in the form of a hilariously whacko Dan Aykroyd), and a psychiatrist who doesn’t want to see him (played brilliantly by Alan Arkin in homage to his role from The In-Laws). What’s a dude from the late-1990s to do about all this?  Try to solve it by going to his 10-year high school reunion.  Darkly violent comedic hijinks ensue.  George Armitage follows up his brilliantly dark Miami Blues with this wicked take on the John Hughes dream of high school gone awry.  Watch for the amazing Minni Driver, aforementioned Aykroyd, and Arkin, Jeremy “Ten Years!” Piven, Joan Cusack, Hank Azaria, K. Todd Freeman, and Jenna Elfman who plays everything in a neck brace.  Yeah, this one is still a keeper.

This one is known more for its behind-the-scenes nonsense than the actual film.  The film itself is good except for the whole kicking and beating the shit out of your wife as a joke.  The director’s cut is an actual director’s cut with Doug Liman adding in a lot of R-Rated Action, a huge dose of R-Rated Sex, and reconfiguring the edit to be a little be smarter about how things play out and making the “therapy scenes” a bit more of a backbone to the narrative.  Honestly, this is the apex for both Pitt and Jolie. They’ve never been more attractive, charming and in control of their respective star wattage.  It’s a definite recommendation except you know… the whole beating-the-shit-out-of-your-wife joke-fight in the middle of the film.

I had to wrap these damn assassin films up with a true blue piece of art.  Enter John Woo’s The Killer.  The Killer represents possibly the best and most stylish entry to John Woo’s “heroic bloodshed” films, a genre that the man himself created with A Better Tomorrow.  The Killer has Chow Yun-Fat going full-on Alain Delon as the cool as fuck Assassin, and John Woo going full-on Jean-Pierre Melville by way of Sam Peckinpah.  The film begins with a hit gone awry with Ah Jong (Chow) blinding a lounge singer.  The film just gets more complicated from there as Ah Jong starting a relationship with said blind singer.  A cop (Danny Lee) begins to track the mysterious assassin’s movements as he kills a political figure.  Bullets, bodies, bird (doves specifically) all fly in beautifully choreographed slow motion. In the center is Chow Yun-Fat, the coolest mother fucker to ever walk the earth.  Doubt me?  Watch the film and come talk to me afterward.

The Clash of the Directors: Michael Bay vs. Roland Emmerich

Man, oh, man. This is Bay swinging for the fences at respectability. Man, does he ape Terrence Malick’s style in this one? Though there’s a healthy dose of what he thinks is Cameron romance but comes out as sweaty melodrama but not the good kind.  There’s so much wrong in this film.  It’s an hour and twenty minutes before the attack starts proper. All filled with that Melodramatic Romantic Triangle that’s hokier that any wartime film they made in Hollywood.  I can’t even with both Affleck and Harnett’s faux Texas-Arkana accents.  Jon Voight acting as FDR like he’s already accepted his Best Supporting Acting Oscar through that hilarious make-up.  Leland Orser shows up to do his mania manic thing he’s done since Se7en.  Michael Shannon shows up for a few minutes.  Dan Aykroyd shows up as what else? A paranoid codebreaker.  The director’s cut doesn’t make any of this affair any better.  All the director’s cut does it give us an R-Rating with lots of Saving Private Ryan style gore inserted back into the film.  Bay does make things look pretty.  Every cent of the reported $145 million budget (rumors were closer to $185 to $200) is definitely on screen.  One wishes that it was just all… perfunctory and overwrought.  They really should have just gotten Celine Dion to do the theme because the song is … it sounds like My Heart Will Go On.  This has prompted me to want to go back and watch Titanic.

SPOILERS: It would have been much better if Harnett had lived and Affleck died with a scene of Kate Beckinsdale secretly crying of showing Affleck was her real “Love”.

Roland Emmerich does in like 45-minutes what Bay does in 155-minutes of his 185-minute running time.  Midway is not the swing-for-the-fences enterprise that Pearl Harbor was.  It shouldn’t be.  Thank the gods it isn’t.  There’s a sense that Emmerich is having more fun with this 40’s melodrama throwback than he’s had in the last twenty years trying to find new and repetitive ways to destroy the White House and the world (though, I’m a huge Stan for White House Down). Here he’s only trying to destroy Pearl Harbor and a bunch of Military Equipment.  This reset to a smaller more intimate settings has seemed to free the director to do some of his best work.*  The cast he gets is surprisingly game, more game than the Pearl Harbor Hottie Totties of the era.  The closest you get to that sort of casting is Nick Jonas as Bruno Gaido, but Jonas works so hard at the laconic working-class dude’s dude you got to give him cred, because honestly… the guy pulls it off.  Ed Skrein and Luke Evans playing the Maverick vs. Iceman fighter jockeys at odds with one another is so pulpy fun that you won’t miss any sort of tacked on “love story”.  The embarrassing part of the film is the “wives stay at home” B-Plot lines that have both Mandy Moore and Rachael Perrell Fosket stranded worse than any of the actresses in Pearl Harbor (exception is the gross-gross underage romance Jamie King has to play in Bay’s film, the second of its kind in a Bay film… dude, REALLY? Come on, your better than that.  I mean when you have a scene in the middle of your stupid robot movie actually explain a shitty Texas law… fuck you).  Bonus points aplenty for Woody Harrelson acting and the acting Woody’s Wig does.  Also, casting someone who looks like John Ford to play John Ford as a version of John Ford that John Ford would fucking love.

*Note: this is all on the Emmerich Scale because when you’ve destroyed the earth at least 3 times and have destroyed the moon all in pretty graphic detail recreating Pearl Harbor and Midway in one film is a cinch.

In the Clash of the Auteurs Roland Emmerich is the clear winner for his utilitarian craftsmen workmanlike but still stylish Midway.

Why?  Because the dude manages to make a highly entertaining un-self-important film that is pretty kick-ass for:

I’ll be back in a few days, with another Preoccupation from a long time ago in a galaxy far far away… That does it for now.