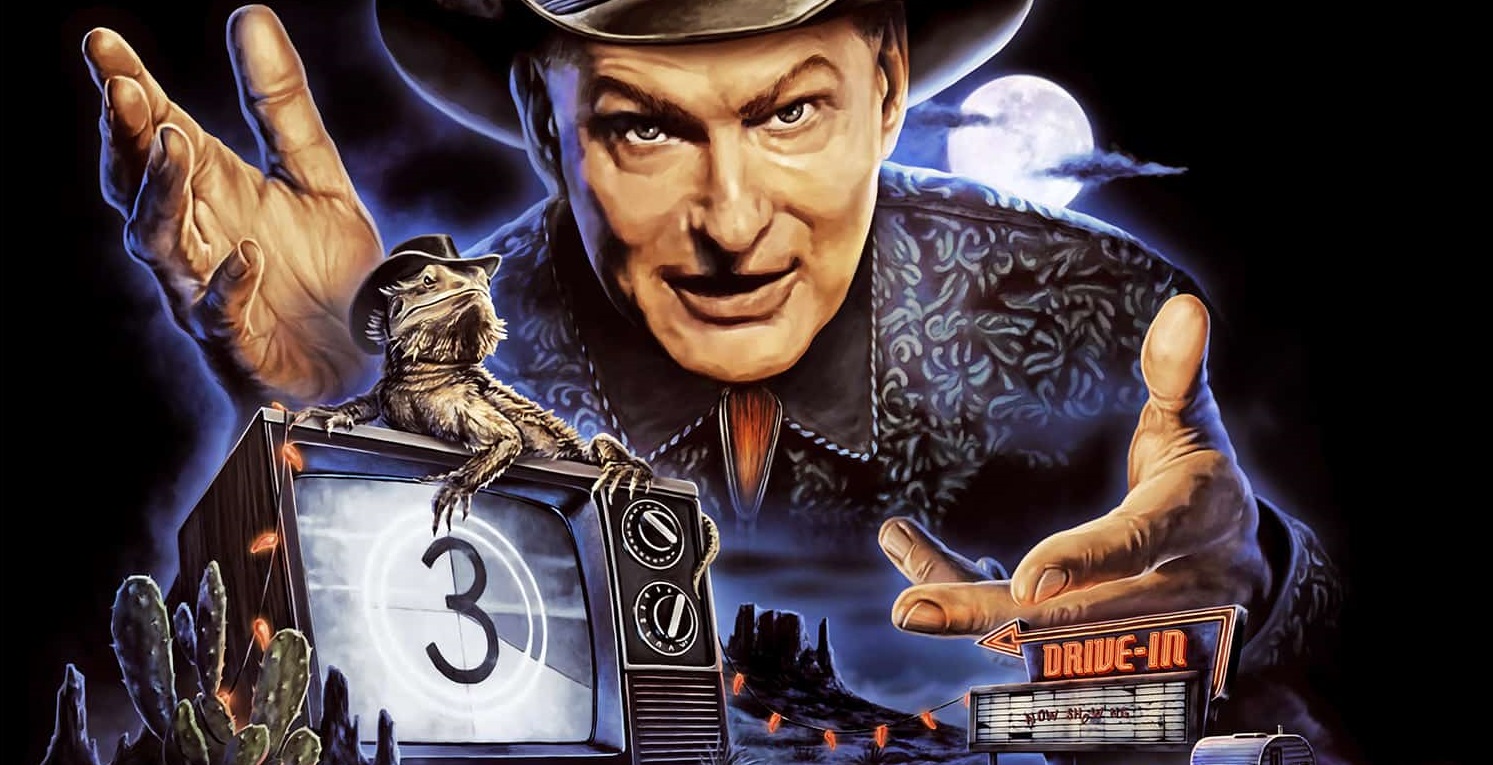 Adam discusses his love of Joe Bob and how his love of what he knows as Cult / B-Movies were crystalized by one of his favorite critics.

It all started in 1992 when my mother changed our cable subscription from HBO/Cinemax to Showtime/The Movie Channel. As a kid, I was pissed. Cinemax’s late-night programming was now gone (what people affectionally call Skinamax, which it never was called). At first, I thought we were trading down. Little did I know that I was getting so much more than I bargained for. First and foremost, Showtime’s late-night programming was far superior to “Skinamax”. They had the European Art softcore, which meant I went from Sybil Danning and Shannon Whirry to Laura Antonneli and Syliva Krystel. Horny teenager viewing habits do get us to today’s topic. Trust me.

It was actually the late-night programming on The Movie Channel that lead me to find Joe Bob’s Drive-in Theatre. I’m still not sure what movie it was that he covered. I wanted to say it was Robocop or Evil Dead 2. I remember searching through the TV Guide and the late-night movies looking at what I was going to record. I saw that there was a late-night showing of either of those movies and it was just by chance I needed a copy of either that I recorded it.

Cut to me watching this dude in a Texas Tie laying down, very funnily, the down-low on the film. Normally, I’d been pissed. I wasn’t really all in for Hosted content yet, AMC back when it was essentially Turner Movies Classics, I always made not to record the Hosted segments. This was different though. This dude spoke a language I understood. This was my first Joe Bob experience. It would not be my last.

From that point forward I was a devoted Joe Bob fan. His tastes were impeccable. He managed to love these films without some sort of snark though never made illusions to the quality of some of them. Joe Bob was the guy who before the internet made me feel that it was okay for loving strange Italian Horror films or the B-Grade cheap action films that I watched.

I and my friends were freaks. We liked Martial Arts, Gore filled Horror, Low Budget Action films, these were things that no one liked in our neighborhood. By the time that he began to host Monster Vision with Joe Bob Briggs, I was graduated from High School. Because I was working I had to record the show. I did, devoutly, and every week would watch not for the “edited-for-TV” films but because of Joe Bob.

It wasn’t his breakdowns of Top Gun, The Exorcist, Highlander or films of that ilk that kept me tuning in. It was his love for all things I wasn’t aware of… Larry Coen’s It’s Alive trilogy or Stuart Gordon’s From Beyond or the George Eastman-directed classic 2020 Texas Gladiators (which I’m still waiting for someone to release). When his show went away in 2000…

The spirit of Joe Bob is in all that I do and have done on the web. Beginning with the B-Movie Podcast and the coverage that I do for films. All of it is because of Joe Bob. So, in 2018 when he started to do his marathon’s and Shudder was able to resurrect Monster Vision, this time uncut and unfiltered I was elated.

I didn’t cover it on the site because honestly, I didn’t know how to exactly cover something that I loved so passionately and was “in the bag” for as soon as it was announced. Joe Bob and my love of what he does so deeply personal to me. So, I wasn’t sure how to approach even reviewing what he’s done on Shudder. I love it all. Even when the film is something I don’t like, I’m there 100% because listening to Joe Bob is like listening to a trusted friend give you the lowdown.

Cut to 2020 and this entire shitshow that we’re watching unfold. I have a lot of time on my hands and it felt perfect to spend it with a good friend, a best friend. There’s comfort in what Joe Bob does and a sense like even though it’s a mess out there that I can deal with it because I’ve not only got a stack of movies to watch with my friend Joe Bob, but I’ve got more coming up beginning April 24th.

This feels like a Joe Bob Special and it is. Having never seen this whack-a-mole Horror film it was the perfect movie to be guided through. Bonkers isn’t just the word to describe it. It’s something truly special and a film that only Brigg’s can really guide you through. Chuck Connor’s is legit amazing in this film. His ending “whoring” speech is something to behold. The entire film is something else with its mishmash of horror troupes that don’t really add up but make for a truly singular experience.

The Prowler – Not Available

Sorority Babes in the Slimeball Bowl-O-Rama

Another that I had not seen but damn, I’m sure glad that Joe Bob decided to show. It feels like a Vinegar Syndrome title watching it. It was no surprise that it was released by Charles Band Fullmoon Entertainment. I wasn’t sure what was more fun, hearing Brigg recap and dole out information or the actual film. The genie “careful-what-you-wish-for” premise has been done countless times but this one with Lena Quiggley in the middle doing her full-on Punkrock Final-Girl badassness makes this film. The jokes and the effects are pure 80’s cheese but no matter because isn’t that what you sign up for when you’re watching a film called Sorority Babes in the Slimeball Bowl-O-Rama, anyhow?

Daughters of Darkness – Not Available

Can we be honest? I’ve tried to watch this film a few times and each time I get through it I dislike it a little bit more. Mad respect to Hershel Gordon Lewis. I can see what he did. I know what he did. The history and the “what” is actually more interesting than the film. Even in Brigg’s interludes, it seems like he loves the facts/history behind the making that the actual film itself. It doesn’t surprise me to learn that Lewis did not care for his films and saw himself more like a marketer. It shows absolutely here, and Brigg’s giving us context makes all the more apparent. I’ve never really done a deep dive into HGL’s career and after hearing about him and know more, I’m glad I didn’t and I don’t think I’m going to.

I watched this the day after Stuart Gordon’s passing. What a tribute to the director. To hear Joe Bob talk about Gordon was the most fitting tribute. His affection and true reverence for the man and the work he did here and also in other films and projects is very apparent. Watching the film only reaffirms my feeling that Stuart Gordon’s work is highly underappreciated. Re-Animator is as good a film as its contemporary Evil Dead 2: Dead by Dawn. I’ll go out on a limb here and say that Re-Animator is a BETTER film. I know. I know. Just look at them and ounce for ounce the older I get the more I see Re-Animator as the far superior film.

I have never seen Lamberto Bava’s Demons. I’m glad that I did and waited for Joe Bob’s running commentary on Demons to do so. Jesus, Briggs is on fire by the time the marathon got to this supposed Italian classic. His discussion of the Demons series (and what’s not apart of the series but actually is) is outright genius and pretty fucking funny. It helps that this movie in its weird fucking out there plot of an advance movie-preview gone-awry when the audience turns into zombies. This film did make me miss going to a theater with the scenes of the audience watching in a big huge single-screen theater (reminded me of the Hollywood Egyptian).

The Legend of Boggy Creek – Not Available

The final film currently available and man a doozy. This Spanish, made in Spain, with Spaniards thinking what American College Kids are like… is bug nuts fucking insanity. Add Paul “I’m Bluddo form Altman’s Popeye” Smith as a simpleton gardener/groundskeeper and you’ve got a six-drink slasher fun. Six-drink, cause you’ve gotta be drunk or punch-drunk to enjoy Pieces. Joe Bob seems to be having a ball here describing everything from Spanish Political History to the way that director Juan Piquer Simon got the cast together.

The best part of this dip into the wonderful universe of Joe Bob Briggs is that there’s still more to dive into and beginning April 24th a brand-new season of The Last Drive-In. This will not be the last Preoccupation about Joe Bob, in fact, I’m sure that we’re going to cover all the content on Shudder where it concerns Mr. Briggs.

To Stream, it all just go to Shudder.com to sign up for their 30-days of Free Access (use the code: SHUTIN). Or do what I did which was just pay for a year in advance!

That does it for now.  I’ll be back in a few days, with another Preoccupation.