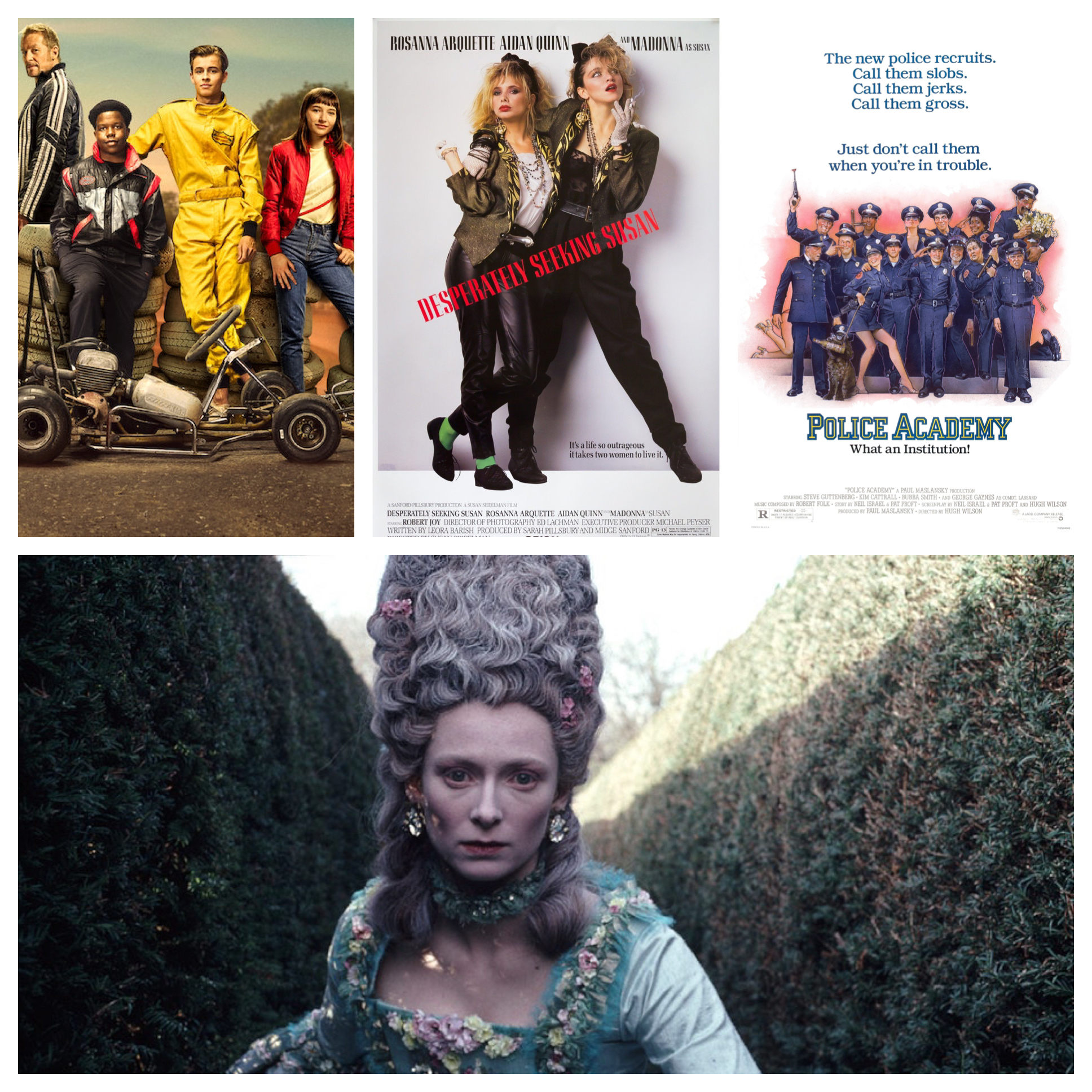 Part Journal.  Part Recommendations.  Part Keeping My Sanity.  I’ll be posting these entries on the site with regularity.

You’ve heard from 100s of other Sites and Companies about how COVID19 is changing everything or there with you during this time of change.  I, agree, so we all know the situation.  We’re all stuck in our respective domiciles with hours to spare on content.

This thing popped up on Netflix’s newly minted Top Ten titles. Rather than going with the masses with something like Outbreak or Contagion or some Pandemic stupidity I went with what I expected to be a the middling-of-the-road title.  Turns out… it’s a fun time to spend 100 minutes.  You know exactly where it’s going and all of its narrative moves.  The film is sincere in a way that most of these types of films are not.  Director Owen Trevor and Screenwriter Steve Worland put in that extra bit that pushes the film over the top.  There’s a whole videogame motif that really does work and isn’t as cheesy as it sounds. The film is helped tremendously by the great Richard Roxburgh in full-on gruff-tuff-grizzled-and-chizzled mentor mode.  Even if you’re not a fan of Racing this is a solid adventure/sports film. One that you’ll be surprised that you’re cheering for by the final race.

Have we talked about how Tilda Swinton should play DAVID BOWIE…

Secret confession… I’ve never seen Orlando.  I’m betting either have you.  So, we’re good right?  Okay.  Here’s the thing… this movie fucking rocks.  Rocks the way that only a female filmmaker could have made this movie, rocks.  Sally Potter’s adaptation of Virginia Wolf’s novel (Potter wrote, directed, and composed the film) is as slippery as the writer’s best work.  Potter with a game cast turns this costume drama with a twinge of science fiction into a work of poetic beauty with a strong sly wit.  Tilda Swinton is flat out amazing as Orlando, the being who travels through 400 years of history.  The film packs more beauty, storytelling, intrigue, romance, adventure, and humor in its 94-minutes than most films do twice its runtime.  This is the film that has convinced me that no one but Tilda Swinton can be cast as David Bowie if a biopic is made of the man.  That or someone should give Sally Potter and Tilda all the money to remake The Man Who Fell to Earth starring Tilda.

Get into the Groove…

Damn… we all slept on Susan Siedelman.  I’ve always loved her work but after a rewatch of this and others (I’ll talk about each later)… its very apparent we should be talking about her more.  I have a huge soft spot for Making Mr. Right because it was one of those films I watched constantly because Showtime looped it in a steady 24/7 rotation during the early 90s.  Desperately Seeking Susan was a HUGE movie in my household when it was released on VHS.  My parents could not agree on a lot of things but Madonna was one of them.  As you could imagine probably for very different reasons.  Imagine my delight when more than 30-years later the film still rocks.  Rosanna Arquette and Madonna show off why they were so in demand as actresses in the 80s here. They are both at maximum charm and star power here.  Arquette has the trickier role of the housewife thrown into the midst of this mystery plot.  That doesn’t diminish what Madonna does here.  She’s all sexy slippery independent free spirit.  Something not easily pulled off.  Siedelman’s tastes in collaborators are as good as anyone working during this time. Thomas Newman’s score.  Ed Lachman’s photography.  Early supporting roles by Adian Quinn, Robert Joy, Will Patton, Laurie Metcalf, John Turturro,  Richard Edson, Giancarlo Esposito, Victor Argo, John Lurie, and Ann Magnuson (childhood crushing-crushy-crush). Look at those collaborators!  The best part is the movie is crazy fucking good-time-fun with the energy of the best NYC films of the 80s.  Bonus points for a soundtrack that mixes 50s pop and 80s pop/hip hop/punk.  I think I’m planning on showing this to my wife as it’s a fun ride of a film.  So, get into the groove.

Lord, halp us sometimes the 80s got it real-real-REAL wrong…

Wow, what a decade or two makes.  You may want to keep your love of this series to fondly looking at the much better posters for the films.  If not.  If you dare.  I’m going to give you a brief breakdown of some of my thoughts on all seven of these films.

The Stripes ripoff is missing something major… Bill Murray.  Instead, you’ve got Steve “The Goot” Gutenberg at his most Goot-est.  This fucking thing offends at every turn.  Sexist, racist, stupid, homophobic.  More of a fascinating car wreck that you can watch and say, “only in the 80s can something like this get made and make the equivalent of $350 million in adjusted dollars”.  Others will say harmless… well, make up your own mind.

The only bright spot is Bobcat Goldthwait as Zed the leader of the punk-anarchist gang that’s at the center of this film. The basic same formula still applies here.  Shenanigans ensue as the group faces off against a new authoritative figure in Lt. Mauser (Art Metrano) and his shit heel lacky Proctor (Lance Kinsey).  Oh, if you think it’s funny that two guys getting stuck in a gay bar where the punch line is that they’re going to be raped by the patrons of said gay bar… this is your fucking movie.  Only Bonus Point: Howard Hessman shows up.

Police Academy 3: Back in Training

When you realize that the formula worked better when they were at the “police academy” they have to find a reason to go back.  That, plus Mahoney (The Goot) and his cohorts are the worst fucking keystone kops since … well, the keystone kops.  This time the filmmakers create your basic slobs versus snobs as the city can only afford One Academy in a Two Academy town.  So it’s Mauser’s elite fascist-racists versus Lassard’s (George Gaynes) dumb shits.  If the series couldn’t get more racist the addition to Cadet Nogata (Brian Tochi) as the Creepy Asian character proves IT CAN!  Literally, that’s his character if you can call it that; CREEPY ASIAN.  He knows Karate and leers at women with big breasts.  That’s his entire “character”.  This film also begins Jonesy’s (Michael Winslow) whole, “my funny sounds also give me superpower abilities” which the funny sounds were not funny half-way through the first film.  They don’t give up the Blue Oyster/Gay Bar guys are going to be raped “jokes”.

Sharon Stone shows up as a reporter.  The Goot tries to sexually harass… I mean charm her reporter character.  Everyone is really uncomfortable.  The Goot’s last film but he contributes the most important moment in the PA series… he looks at the camera ala Bugs Bunny.  The plot revolves around turning Citizens into a watch group for the nameless city.  Captain Harris (GW Bailey) is back from the first film after Art Metrano realized no amount of money would suffice to be the butt of shitty jokes. Though for no reason, Proctor is now Harris’ lacky shit heel.  We’ve got David Spade and another kid showing up as skateboarders.  The one thing the film does get right is said teenagers’ clothing… spot the AJ1 on the kids at the beginning of the film as they skate and stunts done by Tony Hawk.  Oh, yeah, of course, the Blue Oyster joke happen again.  Yay, for progressiveness.

The Goot leaves and enters Matt McCoy as Lassard’s Miami PD nephew.  Why are the gang in Miami?  Lassard is getting Police Officer of the Decade by the Police People of American (a guess because it’s never told) and rightfully Harris is pissed.  There’s some sort of Pink Panther-esque plot involving a group of criminals led by Rene “too good for this series” Auberjonois (in more tanning spray than our current president) and a mix-up between his bag with diamonds in it and Lassard’s bag.  I will say this much, the production value at the end with an entire 45-minute setpiece in a hotel and bayou of Florida is begging to be ripped off from some keen action director (once we get out of the quarantine bullshit, we’re in).  Thankfully, no Blue Oyster/Gay Jokes.

Filmed in the bright and sunny backlot of Warner Brothers in downtown Burbank, the film is about as realistic locations as the last third of Peewee’s Big Adventure.  This one has something to do with a gang of bank robbers (led by Gerrit Graham) and their “Big Boss”.  Lassard and Nephew Lassard try to track these criminals but Harris and Proctor appear to foil them for political gain at every turn.  Lassard’s group even ends up suspended because they’re implicated in the crimes.  Don’t worry it all ends happily with a, I shit you not, ending that’s straight-up fucking Scooby-Doo.

Stay away.  Even if you see Christopher Lee, Ron Perlman, and Claire Forlani in the cast.  They can’t help a sinking ship.  Trust me…  No need to recap.  No need to review.  Just; Stay. A.  Away.

And that will do it for now.  We’ll be back in a few days, maybe sooner, with more ventures in watching.