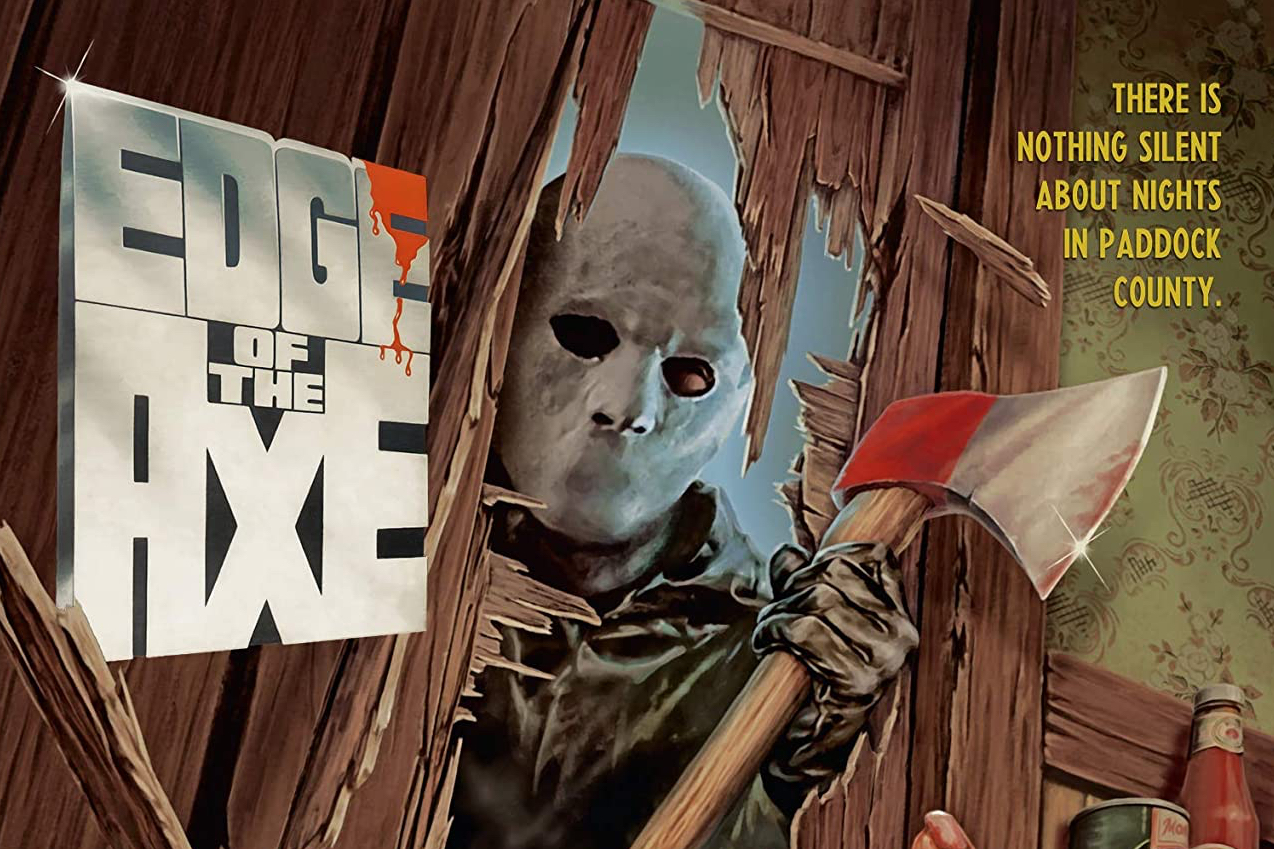 Shane Shelf is back with a look at Arrow Video’s Blu-Ray of the cult-oddity Spanish Slasher Edge of the Axe.

I remember my magical trips to the local video store in the 80s and 90s.  They are some of the best memories of my childhood.  Going through the aisles and seeing hand-drawn VHS cover art for teen comedies, fantasy, action and slasher films.  I was mystified by those slasher covers.  Arrow’s recent release of Edge of the Axe features key art that reminds me of all those incredible VHS covers from my childhood.

The film, a Spanish/American co-production, features a standard 80s slasher setup.  There’s a small rural community, Paddock County, filled with young adults being picked off by a masked killer.  If that premise sounds like a fun little slasher gem, keep reading.  This film is an unfortunate slog.

There’s an unreasonable amount of time spent on exposition and setting up characters just to kill them off.  The town also features a Sheriff who has my vote for the most clueless Sheriff in a slasher.  The kills are decent but forgettable.  The leads (played by Barton Faulks and Christina Marie Lane) spend an inordinate amount of time in front of computer screens mulling over inane lists.  Remember those computer lists though because they end up being a ridiculous component of the plot somehow.  Riveting stuff, I know.

The design (black slicker with a white mask) for the killer is simple but memorable.  The Northern California exteriors (mostly Spain doubling for California) deliver a better than average backdrop to the proceedings.  Those are two of the bright spots in an overall dull film.

When watching slasher films from this time period I tend to be forgiving.  I’m just looking for a simple narrative and kills that are entertaining.  Edge of the Axe delivers decent kills but unfortunately a rather boring narrative that relies too heavily on clunky computer exposition.

If only the film was a great as that key art suggests.

Brand new 2K restoration from the original camera negative is stunning to look at.  The Spanish/California backdrops are gorgeous laid against kills that are strikingly rendered onscreen. This is a beautiful restoration of an all but forgotten 80s slasher.

Audio Commentary: The audio commentary features actor Barton Faulks and one of his former students and film podcaster, Matt Rosenblatt.  It’s interesting to note that he left acting shortly after filming and became a teacher at a Texas high school. Barton and Matt have a good conversation that lends insight into the production. His affection for the experience really shines through in the commentary.

Gerald’ Game: Barton Faulks gives a great interview led once again by his former student Matt. He goes into detail about his time in Hollywood and his excitement when landing this gig. He also breaks down his reasons for leaving the business and his current passion, teaching.

The Actor’s Grind: Actor Page Moseley is interviewed and speaks with reverence about his time on the film. Discovered at North Carolina School of the Arts, he talks about his days in New York, working on a soap opera and his enthusiasm for traveling to Spain to film Edge of the Axe.

The Pain in Spain: This is a newly filmed interview with special effects artist Colin Arthur who also worked effects on the Arnold fantasy epic Conan the Barbarian.  He talks about the process used for creating the multiple axes in the film and his work developing splatter effects for one of the more memorable kill scenes.

Edge of the Axe is a competent little slasher that delivers strong kills but fails at narrative and pacing.  For slasher completists, I would definitely recommend but otherwise steer clear.