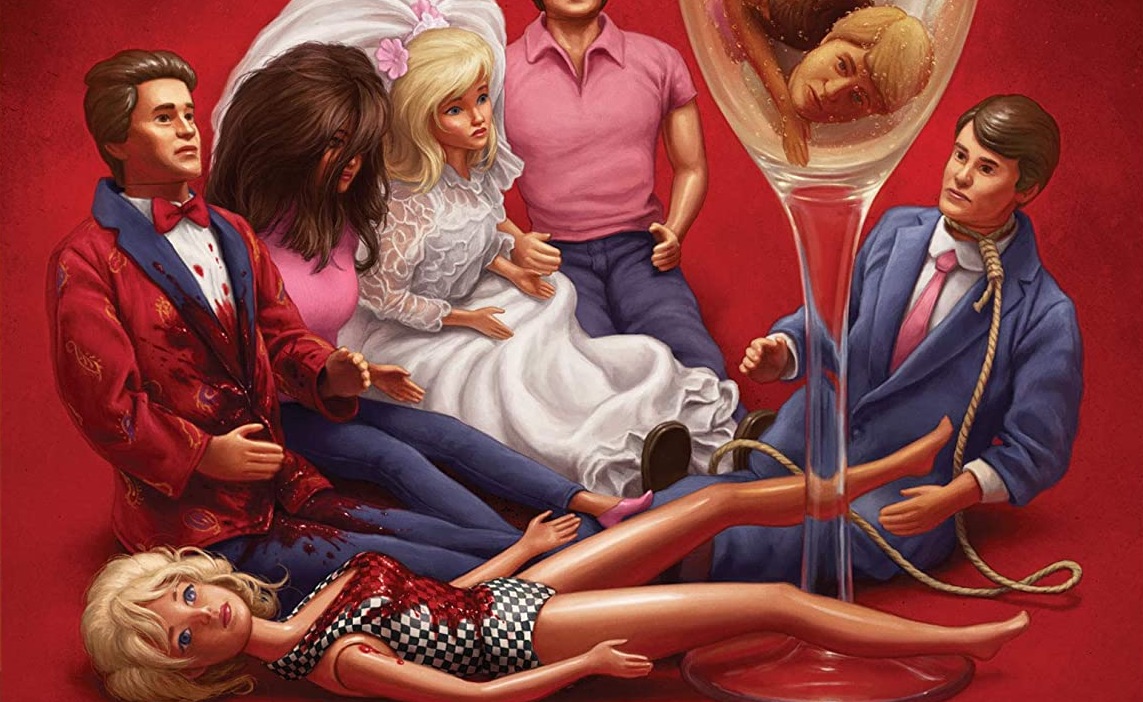 April Fool’s Day has enough twists and turns making it smarter than your average 80s slasher.  The cult classic is being released on Blu-Ray by Scream Factory, filled with new extras and a beautiful transfer.

What begins as your typical Slasher setup turns inside out by it’s closing.  April Fool’s Day has much more going than most of the era horror films.  Part pop confection.  Part commentary on the Slasher film itself.  The film is a whole lot of fun that shouldn’t be ruined.

Screenwriter Danilo Bach and director Fred Walton both are keenly aware of the genre and troupes they are working within.  Thankfully, they play things without a wink-and-nudge to give away anything. Though that’s not to say that the film does not play tongue-firmly-in-cheek, which it does.

Audiences should be warned, the film is spectacularly UN-PC.  One can cheer and gleefully watch as these Regan-Era Yuppies-In-Training are killed one by one for their sins against humanity.  In fact, the biggest critique the film directs are at these shitty human beings and everything they stand for.  There’s a cruelty at play here.  Something that doesn’t occur until the final few minutes of the film.  That is where April Fool’s Day critiques are most savage.

One can take the film at face value, just another Slasher from the 80’s, or one can look at it as a clever meta-commentary on the genre, the 80s, and the white privileged kids that populated these films.  April Fool’s Day may have convinced audiences for thirty years it’s another stupid slasher but not this reviewer.  Not one bit.

Scream Factory has been provided a beautiful 2K transfer from Paramount. The image beautifully reproduces the contrast and black levels wonderfully (it’s primarily a nighttime movie).  The image is sharp but not at the expense of the grain structure.  All in all, another win from Scream Factory and their new partnership with Paramount.

Horror with a Twist – Part 1 Is an all-new 24-minute interview with the director Fred Walton. The first part the director discusses his beginnings in Washington DC, Moving to California, making the short film that would eventually become When a Stranger Calls, making the feature of When a Stranger Calls, his work on Alfred Hitchcock Presents…, how he met Frank Mancuso Jr (producer of April Fool’ Day), took on the project. The interview has title card prompts for the questions being asked.

Horror with a Twist – Part 2 Is an all-new 23-minute interview with the director Fred Walton. The second part Walton discusses his wrestling movie Hadley’s Rebellion and casting Griffin O’Neal and how that relates to April Fool’s Day, the casting of April Fool’s Day and the covers the entire production. Walton discusses various details like the location scout of the house, the snake for the snake scene, and more. The interview has title card prompts for the questions being asked.

Well of Lies – is an all-new 16-minute interview with actress Deborah Goodrich Royce. Royce who plays Nikki, discusses her origins as a dancer and how she turned to acting in her small liberal arts college in the Northeast. Royce discusses her casting in the film and the work with Walton. The interview has title card prompts for the questions being asked.

Looking forward to Dessert – is an all-new 17-minute interview with actor Clayton Rohner. His father’s work with infamous celebrity lawyer Bert Fields, his growing up a Hollywood kid. Rohner who plays Chaz discusses his college life that turned him on to acting, trying to make it in New York City, his relationship with Walton, buying a ‘55 Desoto (its a car), renting a yacht, and more. The interview has title card prompts for the questions being asked.

Bloody Unforgettable – is an all-new 26-minute interview with composer Charles Bernstein. Bernstein begins with a great story about his mother and her conducting silent films and her being an actual film Composer as an influence. Bernstein’s interview ranges from his love musical theater, his early work composing films like White Lighting, Gator, Stoney, The Man form O.R.G.Y. (Yes, that’s the title), His work with Wes Craven (he of course composed Nightmare on Elm St which is is most known for, Deadly Friend), his work on April Fool’s Day, working with Walton as a director, and much more. Note, Bernstein does discuss his technical approach to composing which is pretty great. Especially for those that are interested in composing. The interview has title card prompts for the questions being asked.

The Eye of Deception – is an all-new 17-minute interview with cinematographer Charles Minsky. Minsky discusses his life before his beginnings that was not from the arts but rather a UCLA graduate and Social worker that eventually lead him to the industry. He details how he began to self-teach himself, lighting, photography, doing it all himself at his home. The discussion is very nuts and bolts/grit and grind of rising through the ranks eventually making his bones as a cinematographer. He does discuss April Fool’s Day in good detail and his work on the film. The interview has title card prompts for the questions being asked.

Rounding out the special features are a Theatrical Trailer and TV Spot.