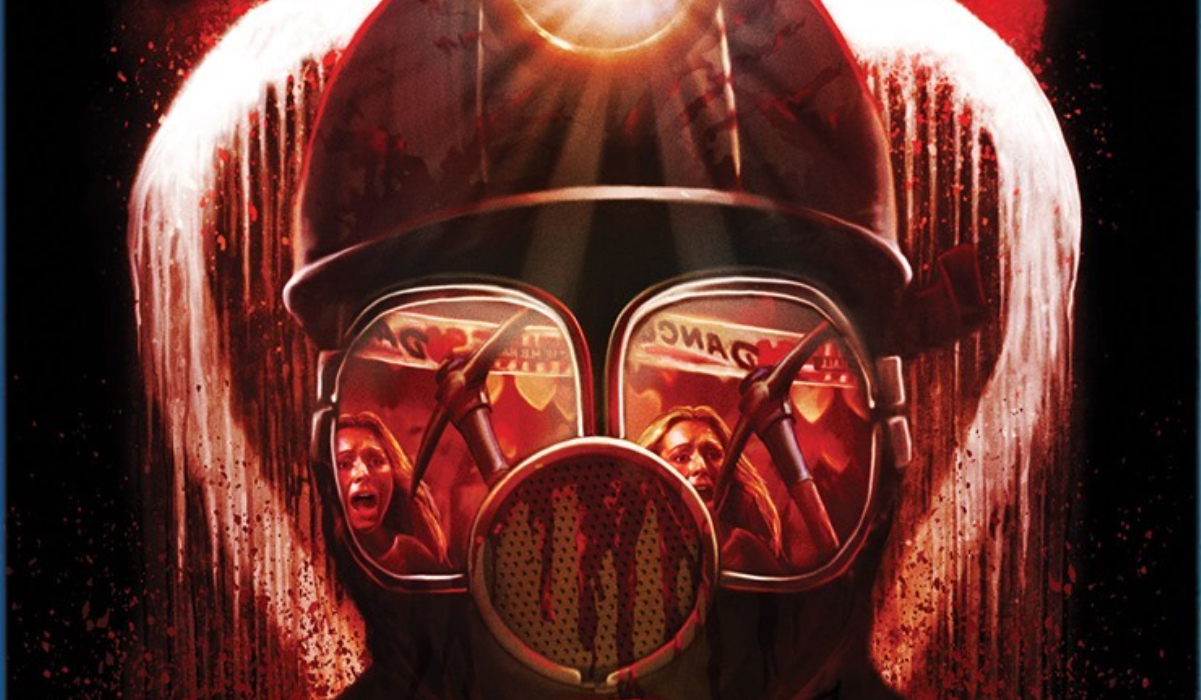 My Bloody Valentine almost forty years old is still one of the sterling examples of the Slasher Genre.  Scream Factory has pulled out all the stops giving the film the deluxe 2-Disc Blu-ray treatment it deserves.

There are few Slasher films that cast as long a shadow as My Bloody Valentine.  Though you would only know it if you loved 80s Slasher films or horror films in general.  The film creates a milieu that feels as though a Hal Ashby film met with an early Wes Craven film.

For twenty years the town of Valentine’s Bluff has not celebrated their namesake’s holiday.  For good reason.  Two-decade prior on the eve of a Valentine’s Day dance an explosion at the local mine killed all but one Henry Warden.  To survive the cave-in Warden ate his fellow miners.  Of course, this caused Warden to go crazy and murder the two foremen who he felt responsible.  During his trial, he vowed if the Holiday were to ever be celebrated, he would strike again.  No faster than one can say Halloween, Valentine’s Bluff as a town has decided to celebrate the holiday.  Of course, with that, the murders begin again… but is it Warden?

What makes My Bloody Valentine so special is the character work and the starkness that director George Mihalka approaches the kills.  The film never feels like some teen slasher film with disposable character. Rather, screenwriter, John Beaird creates a work class milieu that’s more rustbelt ala Deerhunter than Friday the 13th.  You spend enough time with these characters and understand their real-world drama that you can’t help but care about them.  The warmth that director Mihalka brings to these scenes the right kind of understated.

The drama and character work are juxtaposed by the meanness of the violence.  The way that Mihalka sets up and cuts the kills is for maximum impact.  Though he never overtly sell the point with the gore.  The film gives us just enough to make the deaths hurt.  This is the key to the success of My Bloody Valentine.  It’s no wonder that much of the film’s violence was cut, as it is highly effective with coupled with the dramatic parts of the film.

By the film’s stark cut to black one wonders if there was an intention of creating a sequel.  No matter as the ending is almost too perfect.  The bleakness that runs through the film culminates with the shock cut ending.  Of the Slasher Films of the 1980s, My Blood Valentine still has its teeth and is willing to rip into your flesh if you’re willing.

NOTE: The reviewed cut of the film is the Director’s Cut

Both versions of the film are culled from a new 4K Scan Of The Uncut Original Camera Negative and The Original Camera Negative for the theatrical cut.  Consistency of image quality, of course, goes to the Original Theatrical cut.  The Uncut version though remastered from the original negative does show signs of aging but considering where the image began, it’s an utter miracle.  I suggest watching the YouTube clip below to see the differences in restoration.  It speaks a lot louder than I ever could.

Interviews – Note: all of these interviews fall under a Menu Subsection called Interviews

Holes in the Heart is a 12-minute Featurette discussing and showing the differences between the Director’s Cut and Theatrical. It’s a great deep dive for anyone that really wants to see the side by side comparisons. I won’t ruin this stuff because all of it is new.

Theatrical Trailer is an effective 2-minute trailer that gives you a pretty good idea of the film you’re in-store for.

TV spots amount to three 30-second spots that are pretty effective. All are very degraded and worn sources that only lead to the enjoyment of these very antiquated spots.

Radio spots are two 30-second spots. The image they use for the background is pretty funny considering the spots. You’ll get it when you see the feature.

Rounding out the special features is a Still Gallery. The gallery can be navigated using your remote, paused on one of the 141-stills. They range from production stills, behind the scenes images, lobby cards, posters, et al. I know a lot of people sleep on the image galleries but this one definitely shouldn’t be missed as there are some great photos and alt angles of the various gore set pieces that fans of this film won’t want to miss.

The audio commentary by director George Mihalka joined by filmmaker Justin McConnell. Mihalka has a great memory as he recounts the shooting, editing, working with actors, and production, in general, being able to recall specific details. McConnell does prompt Mihalka to discuss specifics. Some of the great information we learn is he is watching this cut of the for the first time. Discussions about how difficult it was to shoot in the mines which are a mile underground and deep in the Atlantic. There was a lost love scene, specifically the one where Henry Warden kills the loves with the corkscrew. The subdue track does offer a lot in the way of production anecdotes and very light on the dreaded “describing what’s on-screen”.

My Bloody Valentine 35th Anniversary Cast Reunion is a 45-minute cast interview taken at the 35th-anniversary screening filmed at the Bay of Blood (Tampa’s Horror Weekend) back in 2016. They do warn that there are some audio sourcing issues but not terrible. Hosted by Brian Singleton the panel includes Director Mihalka, actors Rob Stein, Thomas Kovacs, Peter Cowper, Helene Udy, Jim Murchison, Alf Humphreys, and Lori Hallier. Much of the information is discussed in individual interviews in disc one but much of the fun of this Q&A is watching the cast and crew interact with one another.

Tom Kovacs performs The Ballad of Harry Warden is a 5-minute musical interlude filmed at the Bay of Blood (Tampa’s Horror Weekend) back in 2016. He is joined on stage by fellow cast members Jim Murchison and Peter Cowper. It’s a great time to be had as the song is so serious it’s funny.

Scream Factory has outdone themselves with this Blu-Ray release of My Bloody Valentine. Featuring a wealth of extras, a new transfer, and an uncut version of the film that was thought lost.  HIGHEST POSSIBLE RECOMMENDATIONS!!!!