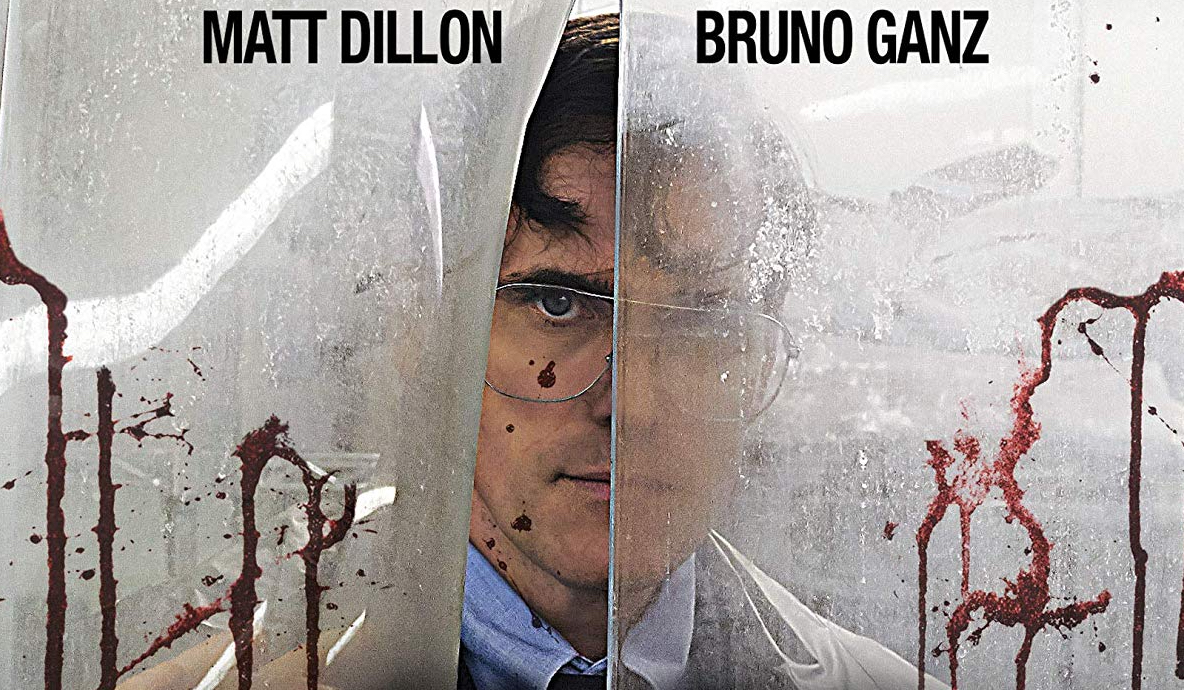 Adam reviews Lars Von Trier’s newest controversial epic; The House that Jack Built.  The film comes to us on Blu-Ray by the folks at Scream Factory in both Theatrical and Director’s Cut forms.

The House that Jack Built, much like anything that Lars Von Trier directs, is the type of film that only a Von Trier fan would want to see and ultimately understand. Using American’s obsession with serial killers, violence, and our general apathetic world views (his views not this reviewer) Von Trier has made the most austere films of recent memory.

Jack’s (Matt Dillion) view on the sixty-plus murders he has perpetrated is art.  As described by Jack these murders and the subsequent mutilation of his victims is art of the highest form.  An engineer by education, an architect by his own design, and murder by birth Jack is the scariest of monsters; a boring white American Male.  Jack recounts some of his murders and his views on art and society to Verge (Bruno Ganz), an unseen possible companion/interviewer in the future.  As Jack goes through the years we are brought to his present-day life and his eventual meeting of Verge.  To what end?

Von Trier has made a film that repulses as it dares you to laugh at the darkest of gallows humor.  The film is not an easy sit even for the seasoned horror film fan.  The banality and calculation that Von Trier shows the violence that Jack perpetrates adds to the verisimilitude of the film, it is only at its apex does the director pulls the proverbial rug from under you.  A spiritual cousin to Melancholia, Von Trier’s personal treatises on depression, much of the film’s design is your willingness to go along with the hard turns the narrative takes.

If one does and can accept what Von Trier is attempting to do with The House that Jack Built is a transgressive experience.  A shock to the system with Von Trier critiquing America in a way that he never has before, and quite possibly ever be allowed to do again.  There is blatant and bold imagery here that lands with the subtly of a sledgehammer.  That is the point though.

Von Trier sees no reason to mince words or make nice.  In his view, every American is culpable for where we are.  Nothing more disgusting than our obsession with the serial killer and our glorification of them, The House that Jack Built will have none of that.  As much of a critique, it is also a scream and pleads for society to help itself.  Much like it’s protagonist, no matter the heeding of warnings and the hell that is at our doorsteps, we still continue unabated to our end.

The film is beautifully transferred to Blu-Ray.  As much as you can call a film that shows grisly murders.  Von Trier’s films have always been visually tricky to transfer to any home video format, The House that Jack Built is no different.  The director’s use of multiple aspect ratios, film stocks, stock footage, and color grading are all handled well by the transfer.  Unfortunately, I do not know how it lines up with the European releases of the film but I can say this transfer is great.

The theatrical cut on Disc 1 cuts about 2-minutes of footage all gore-related.

Sonning Prize: Interview with Lars Von Trier is a 26-minute interview with Von Trier. Being interviewed by Professor Peter Schepelern about the prestigious honor that filmmakers like Haneke and Bergman have all received the honor. Which is a prize given for work done towards culturally relevant works of Art and Artist focusing on Danish-interests. Von Trier is definitely shocked and honored to be awarded this. During the interview he deep dives into his process and his work as a whole. It’s a fascinating and sedate interview from the director. He appears to be quite honest about his alcoholism and anxiety. Many will not get much out of this discussion, those attuned to Von Trier’s esoteric ways will find this at the director’s most honest and quiet.

The House That Jack Built Announcement is a 27-second that is just Von Trier (in a white headband) staring they would be filming in the fall (of 2018).

Lars Von Trier Greeting is a 27-second intro of sorts that he asks you (as it was designed) to watch over a couple of days. Adding in “never another Trump”.

Cannes Teaser is a 23-second teaser. More of a tone poem

Scream Factory has continued to tread into the dangerous end of the Cinematic Seas.  We as an audience are rewarded with a great film loaded with thoughtful extras.  Recommended, but with a note that this one is a recommendation for HORROR FANS or EXTREMIST only.