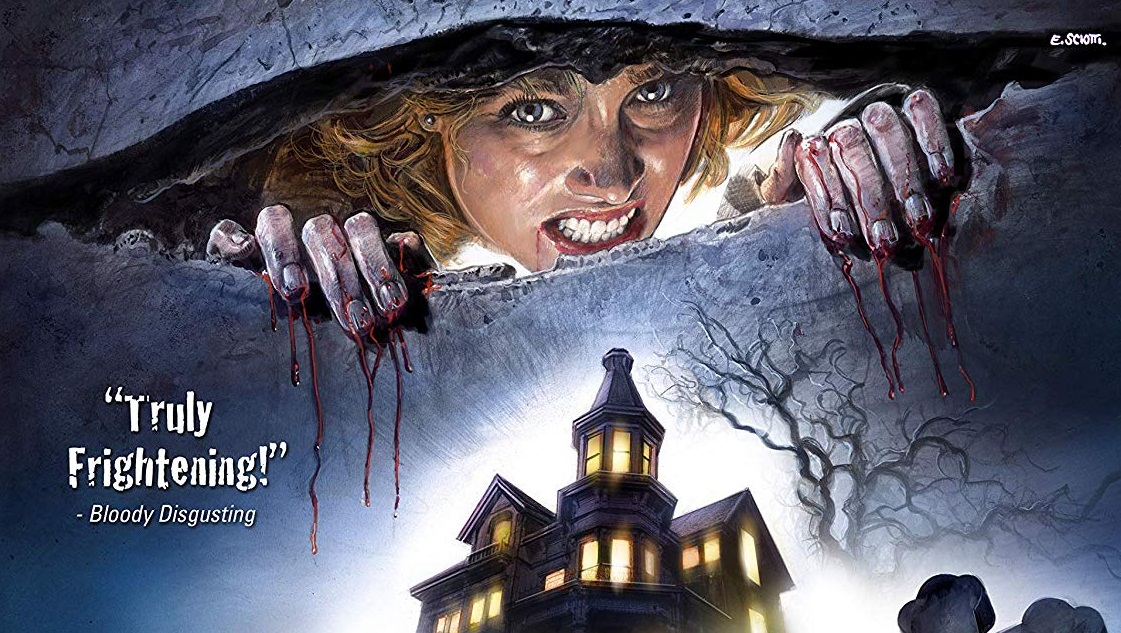 Blue Underground continues their streak of amazing special editions for Cult Films.  Lucio Fulci’s The House by the Cemetery comes with a host of special features, a new 4K transfer, and a CD-Soundtrack.

You do not go into a Lucio Fulci movie expecting things to make sense.  The House by the Cemetery is definitely no exception.  Fulci goes of course “Full Fulci” with this Supernatural Horror story that never plays fair and has a nasty streak a mile wide.  If pressed we’re sure that Fulci couldn’t really tell us what this is about.

The Broyles family moves to New York City to the outskirts of Boston.  Of course, strange things begin to happen immediately to the aptly named Bob and his parents Norman and Lucy.  Before you can say **cough**stanleykubrickstheshinning**cough** we are thrust into a nightmarish realm where children are terrorized and eaten, where scantily clad women are killed, and where nothing really makes sense but is extremely spooky.  Soon, Bob is fighting for his survival but without Danny Torrance’s gifts.  Can he survive?

Fulci sure must have loved The Shinning.  The House by the Cemetery seems to be Fulci’s way of doubling down.  As though he saw The Shinning and declared he could do it better.  In Fulci’s way… he kind of does.  The nightmare logic of the film is something to behold and Fulci’s need to be as mean as humanly possible is very present here (though, The New York Ripper has this one cold).  For a film with a child as its main protagonist, it plays rougher than anything you’ve probably seen (far more terrorizing than The Shinning from that point of view).

Like all Fulci films, your mileage will depend on your strict adherence to logic.  Something that every fan of Giallo must come to terms with.  Though not his greatest work, The House by the Cemetery definitely a fun-ride and a must for any Fulci-Fan out there.

Blue Underground continues to amaze with their transfers.  This 4K restoration from the original negative is nothing short of a miracle.  Even in comparison to their previous transfer for the film, this is lights out great.  Contrast, Color, Grain Structure is perfectly tuned and rendered on this Blu-Ray.  The colorists, compressors, and artisans at Blue Underground are taking transfers to the edge of what is possible.  This Blu-Ray could stand next to some 4K UHD discs I own, let alone current Blu-Ray releases.  It’s that good.

Deleted Scene (1-minute) – as the opening crawl says this scene was found in the negative but does not appear in any of the theatrical or home video releases and thus has no sound and could be included on the release in the film. The scene takes place after the Bat Attack. It literally picks up where the initial scene ends.

Theatrical Trailers is one International (3-min) and the US (2-min). The biggest difference is the international sells the horror and gore moments. The Us trailer has the typical Grindhouse trailer feel with the creepy voice-over narration.

One TV spot that’d 30-seconds long and is definitely a US TV Spot.

Rounding out the First Disc special features are a Still and Poster Gallery. Divided into two galleries that the first that can be navigated and stopped on stills, the second that plays automatically with the score under it. The first (74 stills) and second (22-stills) galleries. The first is mainly posters, lobby cards and ads/newspaper clippings. The second is production stills and art (which appears to be from Blue Underground’s first release).

Meet the Boyles is a 14-minute interview with stars Catriona MacCall and Paola Maico. Both recorded separately and in different languages is almost a perfect summation of the Giallo. Done with a lot of tongue and cheek editing, the interview has the actors talking about the process and Fulci. The best part is Maico’s discussion of Fulci’s thoughts on the material. Maccoll has nothing but respect and affection for Maico and Fulci and shows through.

Children of the Night is a 12-minute interview with actors Giovanni Frezza and Silvia Collatina who play the children in the film. Beginning with both Collatina and Frezza both discussing Fulci and being both charmed and afraid of the director the actors give wonderful details of the shoot. Frezza gives a huge laugh when he apologizes for the crazy voice as it wasn’t him!!! Both recorded separately. Their experiences were very different where Collatina fell in love with horror and Frezza was not in love with his experience. They also discuss Fulci’s attitude and his notoriously cantankerous ways.

My Time with Terror is a 9-minute interview with actor Carlo De Mejo. Beginning with his origins with training under Stella Adler in New York and his Giallo heritage (his mother is the amazing Alida Valli who is the headmistress in the original Suspiria) it’s a fascinating look at his career in the Horror films working with a who’s who of Giallo greats. Tidbits include how he met Fulci, the different productions he worked on with the man, the secret recipe of maggots, Fulci’s temper & misogyny, and other films.

A Haunted House Story is a 14-minute interview with co-writer Dardano Sacchetti and co-writer Elisa Briganti. Some fascinating takeaways are Briganti’s work as a child psychology and the way that Fulci worked with writers on the development, how the story evolved from a story set during a “vacation” to one set in Academia, and Briganti’s particular troubles watching the film.

To Build a Better Death Trap is a 22-minute collection of interviews with DP Sergio Salvati, Makeup FX Artist Maurizio Trani, Special FX Artist Gino De Rossi, and Actor Giovanni De Nava. Together each discusses the various set pieces within the film from their respective talents/skillsets. This is a great “nuts and bolts” discussion of how some of the most iconic scenes were created, including the famous head to the knife, the maggots sludge, and much more.

House Quake is a 15-minute interview with co-writer Giorgio Mariuzzo. Much like Dardano Sacchetti and Elisa Briganti, Mariuzzo discusses his time with Fulci working on the film and additionally how he really became a writer through his meeting Fulci on a TV ad they the director was hired to shoot, eventually working on a Fulci gangster film Contraband, and finally getting to The House by the Cemetery and the very particular way that he and Sacchetti would work.

Catriona MacColl Q&A is a 30-minute interview with the actress taken from the 2014 Spaghetti Cinema Festival. The UK based film festival is an open mic question and answers session. Thankfully the audience is fairly informative and fun with MacColl answering with pretty great informative answers from the actress.

Calling Dr. Freudstein is a 20-minute interview with critic and author Stephen Thrower. The interview is almost a compact version of the wonderful audio commentary by fellow Fulci Historian, Troy Howarth. Though they cover similar ground this is much more compact in its information.  Still a great interview bonus points as it feels more like a visual essay.

The full soundtrack is beautifully remastered here on this additional bonus disc.  For those that love the score, this isn’t just a treat, this is required listening.

Make no mistake about it.  Blue Underground has come out guns blazing with The House by the Cemetery.  If this is what they’re starting with… 2020 is going to be a great year.  HIGHEST POSSIBLE RECOMMENDATIONS!!!!

Blue Underground’s 3-Disc Blu-Ray Edition of The House by the Cemetery is out now!