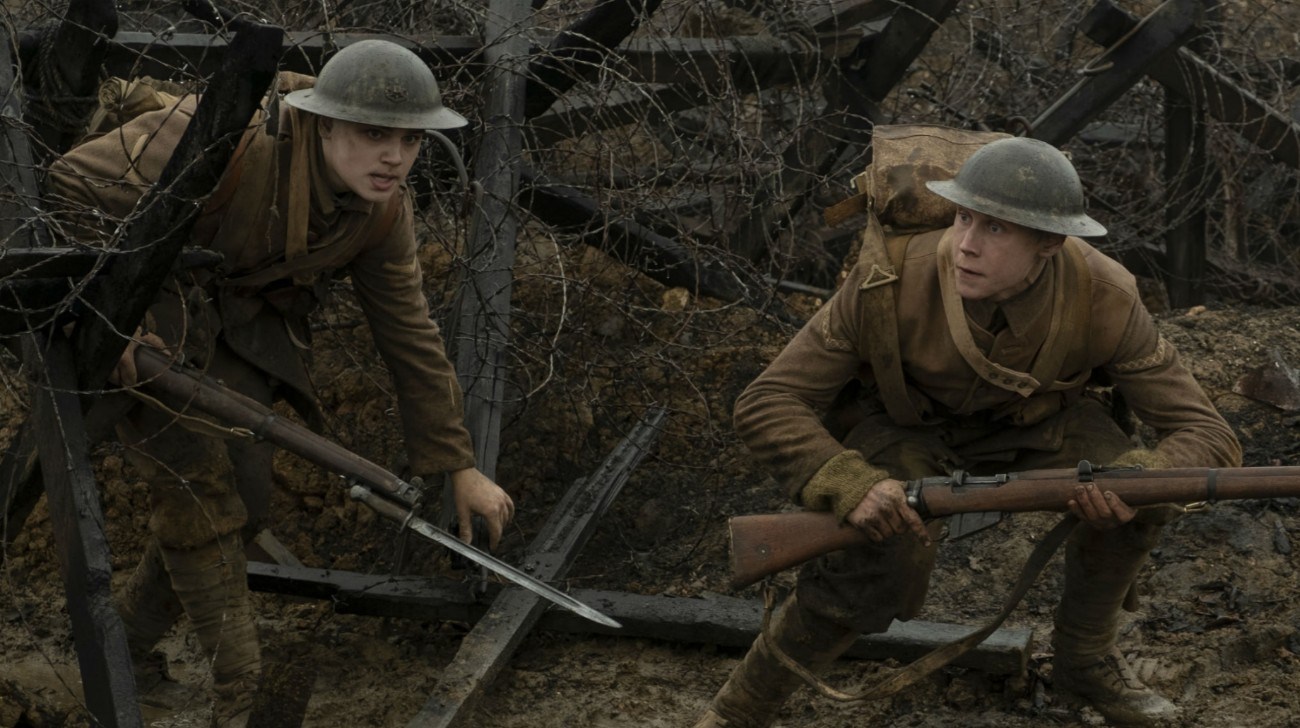 Sam Mendes’ 1917 takes the single take and the War Film further than it’s been before technically.

Sam Mendes’ film 1917 by adding the single take to the ticking clock narrative creates the type of bold filmmaking that we rarely see; a war film that is as an intense experience as the greats of the genre.

Corporals Blake (Dean-Charles Chapman) and Schofield (George McKay) are tasked by General Erinmore (Colin Firth) to get a message to their front lines that the charge planned the next morning is, in fact, a German trap. The German’s have cut all telephone/telegraph lines making it impossible for the General or his staff to make a simple communication to the front line.  With no time to spare and 9-miles of dangerous enemy-infested line to traverse, Blake and Schofield begin their Odeyeuss-like journey into the hellscape of war.

A single shot (aka “a Oner”) has become a cliché over the last few years with TV Shows and Films alike using the technique as a splashy way to design a set-piece. What separates artful intelligent storytelling from a cheap gimmick is always execution.  Director Mendes and Cinematographer Roger Deakins have created something artistically integrated into the seams of the filmmaking rather than ploy or gimmick. A storytelling device informs the story rather than distracts, bringing the audience closer to Blake and Schofield and their journey.

Screenwriters Mendes and Kristy Wilson-Caims have streamlined the story to its barest essentials.  There are few sparse moments of dialog between Blake and Schofield for us to understand the basics of their relationship and their dynamics.  The biggest narrative misnomer is the cliché of “your brother is in that platoon”.  It’s the type of narrative hiccup that permeates many of these “men on a mission” films.  One would have wished they had kept that cliché in the war chest as the film’s set-ups and premise are good enough to carry itself.

The strongest piece of the narrative is the concept itself.  These two young men trying to save other soldiers from an ambush pushes away from the normal dogs of war type of narrative.  1917 is about the courage and valor in saving your fellow man rather than the honor that killing of faceless enemies brings.  There is a gasping for breath tone that Mendes is able to bring to the film that feels urgent at all time even in the quietest of moments.

That is not to say the film is a sedate affair.  Quite the opposite, as Mendes and his crew of both physical and computer technicians have created set pieces that are jaw dropping in their execution, artistry, and scope.  The centerpiece a 10-minute nighttime escape is one of the best set pieces of recent memory.  Not just in its jaw-dropping in execution but in its beautifully rendered visuals.  If this does not convince you that Roger Deakins is the best cinematographer working then nothing will.

1917 delivers an experience unlike any war film before it.  This is truly an event film and technical marvel that should not be missed.  See it on the biggest screen with the best sound possible.

1917 opens in Limited Release on December 25th, then Nationwide on January 10th