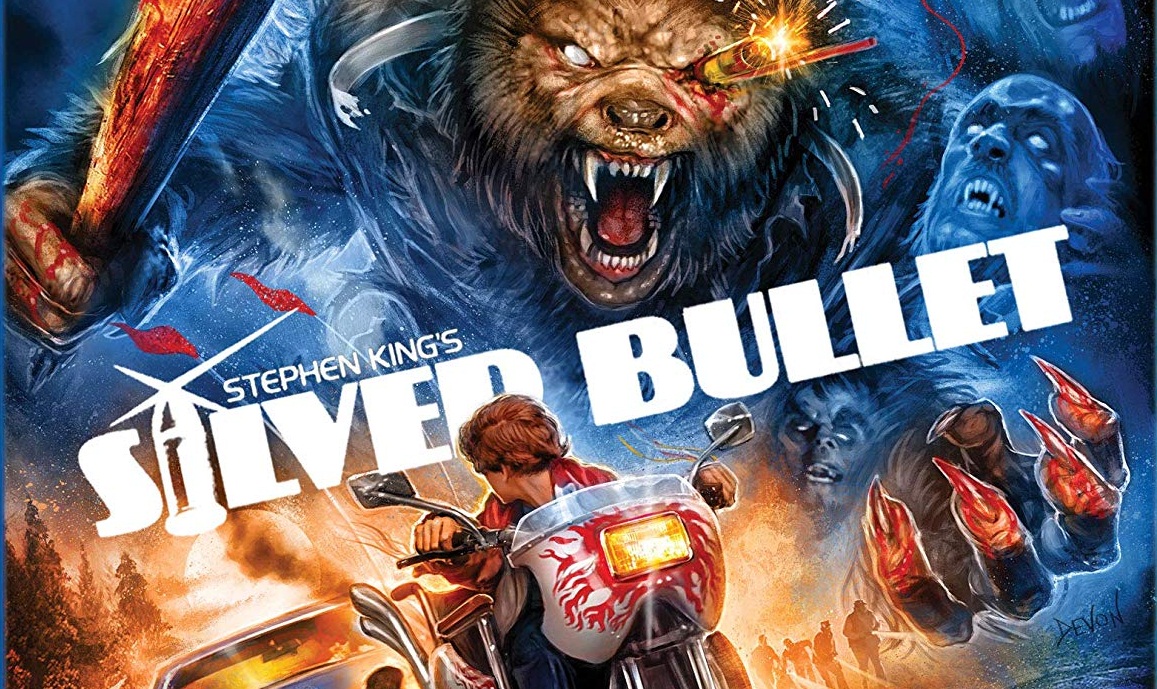 The 2019 Stephen King love affair continues with the new Blu-Ray release of Silver Bullet.  The fine folks at Scream Factory have given the film a great transfer and a host of great extras!

Everyone seems to want to talk about what’s Apex Stephen King and what’s Lesser Stephen King.  In the 1980s it was just Stephen King.  Novels, Screenplays, Shorts, Novellas, all of it was game for anyone that loved genre 30+ years ago.  Silver Bullet is both Short and Screenplay by the maestro of horror.

Set over a summer in the sleepy town of Tarker’s Mill, Maine as a series of grisly murders have prompted the town’s citizen to go a little crazy.  An ineffective Sheriff (played by the great Terry O’Quinn), and a restless mob of townspeople do not help the carnage.  Though none of them are prepared for the secret that siblings Marty (Corey Haim) and Jane (Megan Follows) have discovered; a werewolf is responsible for these murders.  With only their drunk Uncle Red (Gary Busey) who believes them, they are set for a confrontation with the beast that can only end one way…

Director Daniel Attias working from King’s own screenplay understands that adapting the horror master’s work is not about the scares as much as it’s about the relationships and drama outside of the horror.  Attias working with cinematographer Armando Nannuzzi create a beautifully widescreen film that’s shot like a drama rather than your standard horror film.  Much of the film is focused on the relationships between the brother and sister thankfully, as much of the werewolf sections are pretty clichéd by this point in the mid-80s.  What isn’t though is the character and some of the reveals which still work like gangbusters 35 years later.

Silver Bullet though not the best of the werewolf genre in the 80s it definitely merits a watch if only for the unique point of view that King has brought to the picture.  That and the silver bullet of the title still kicks so much ass it’s not even funny.

Silver Bullet comes with a beautiful transfer.  The film has always been a gorgeously shot movie that never felt perfectly transferred to home video.  With this Blu-Ray Release Scream Factory has resolved that issue. The film gives the perfect balance of sharpness and grain structure that gives the entire feature a handsome look.

Audio Commentary by Director Daniel Attias. Attias is joined by DVD Producer Michael Felsher. Felsher does a great job of prompting the director on various topics that include origins, working with Dino, adapting King, and production anecdotes.  Originally included on the Olive Films Blu-Ray Release.

Isolated score and selected Audio interview by Jay Cattaway. More of a commentary conducted by DVD Producer Michael Felsher. The two discuss how he got into composing, his different work, and of course the work here.  Rarely do we get a full commentary with a Composer and this one does not disappoint.   Originally included on the Olive Films Blu-Ray Release.

The Wolf Within – Interview with Actor Everett McGill is a 16-minute interview. The actor who is best known for Twin Peaks begins with his source of how he began to portray the reverend. He discusses how he got the role, and how Carlo Rambaldi’s issues with effects informed on how he got the role. McGill definitely gets into the meat and potatoes of just how difficult it was to do some of the performance. The soft-spoken actor gives some great information about the production and Attias as a director.

Full Moon Fever – The Effects of Silver Bullet is a 21-minute interview with Michael McCracken Jr and Matthew Mogul. Both have a fun time recounting how the FX work came together. Beginning with how they met on Ice Pirates they do a great job of how they worked on Silver Bullet.

Rounding out the special features is Theatrical Trailer, TV Spot, Radio Spot, and Still Gallery. The 90-second theatrical trailer is hilarious in its seriousness including the Don LaFontaine voice over. The 30-second TV spot is a shortened version of the Theatrical Trailer. The 40-second radio spot plays with an image of the original poster behind it. The image gallery runs automatically for 6-minutes and has about 60-photos with the Score playing in the background it can be paused but not navigated.

Any King fan would be happy to have this in their Blu-Ray Collection.  Recommended.