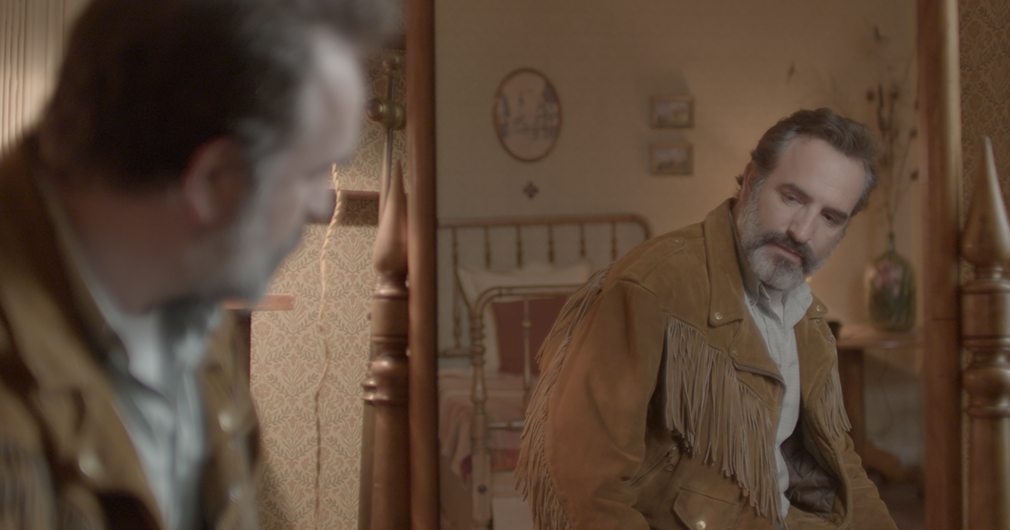 Some films just click with you.  Others leave you mystified.  Deerskin is the former more than the latter.  You’ll have to see the film to figure out which it is for you.

One of the delights of the cinematic world is finding a film so esoteric it alienates everyone but a precious few.  Those few carry the torch, so to speak, for the film turning other likeminded individuals onto said film.  Thus is the cycle for Cult films.  Thus will be the cycle for Deerskin the new amazing feature from director Quentin Dupieux starring Oscar Winner Jean Dujardin.

Georges (Dujardin) has been kicked out of his marriage, his apartment, and effectively his life.  A few hundred dollars to his name and his late 1980s Audi traverse the French country side.  That is until an ad finds Georges spending the few Euros he has on a Deerskin Jacket.  This is the kind of jacket that is out of style the moment that it was made.  For George it’s a flex.  It’s his savior.  It changes him in the ways that he wants.  No longer a sad sack in his 50s with nothing to account for, the jacket has given him a new lease on life as a filmmaker.  But to what end, only the jacket really knows…

What Dupieux has created is a heady brew of horror, fashion, mid-life crisis, and self-reflexive filmmaking that feels more organically complete a film that he has done before.  Deerskin finds Dupieux not distanced as he is with his other films, including the best.  Dujardin’s George is both Dupieux and not Dupieux at all.  There is a kinship and warmth that Dupieux has for the central character that was never present in his other work.

Hopefully, this is not the last time that Dujardin and Dupieux working together as both have found their respective soulmates in collaborations.  In Dupieux, Dujardin has found someone that not only brings out the charm in the Star but a darker more playful side.  In Dujardin, Dupieux has found a Star willing to play in his specific universe of stylized films.  A Star that isn’t afraid to take the giant leaps Deerskin asks of him.  There are some crazy leaps within Deerskin, to be sure, but none quite as crazy as both men gleefully referencing director Richard Stanley as both fashion and filmic flexing.

Many will find everything that I have said about Deerskin both maddening and frustrating, not understanding what I have discussed above.  That only means that Deerskin is not meant for them.  If something does spark your interest in what I have said above, take the risk on the film.  Deerskin is both a dare and a promise; a dare to be more adventuresome in your cinema-going experiences, a promise you will not be the same after you have taken the dare.

Deerskin played at AFI as apart of their World Cinema Program