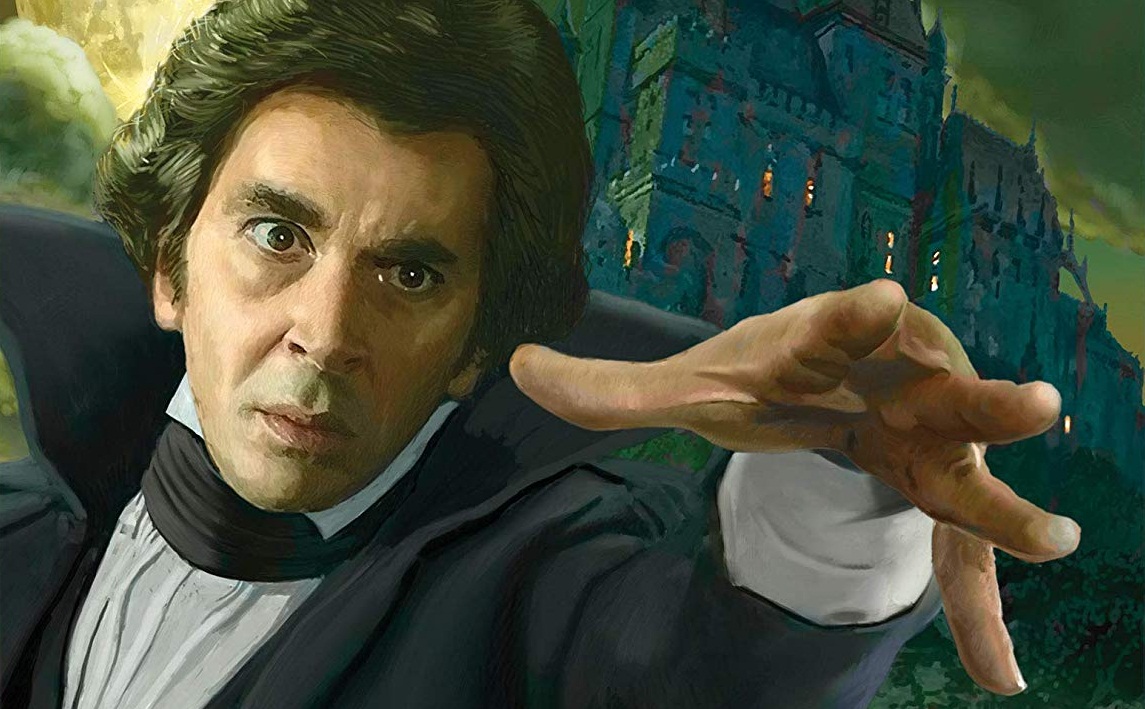 Scream Factory has resurrected John Badham’s Dracula starring the incomparable Frank Langella. The new double-disc Blu-Ray comes with two versions of the film and a wealth of extras.

From Novel to Stage Play to Bella Lugosi’s Classic Back to Stage Play to Frank Langella’s Neo Classic the iconic Dracula had an impressive run for fifty years.  John Badham’s film marks one of the high watermarks of the cycle.

All know the famous story, a mysterious man of foreign linage purchase Carfax Abby a noted rundown property in England from one Jonathon Harker. This mysterious man, Dracula.  His aim, to be amongst the citizens of London and of course feast.  It is only his insatiable appetite for the blood of humans that draws out his end game.  One man, Abraham Van Helsing can stop the man once known as Vlad the Impaler, or can he?

There have been so many iterations of the Dracula story over the last hundred years of cinema that one particular version is never the truest or most accurate of adaptations of the Bram Stoker Novel.  The ones based on the 1924 stage play by Hamilton Deane and John L. Balderston are the most popular.  Here the play and novel adapted smartly by WD Ritcher finds the proceedings a bit more grounded than the Todd Browning 1931 Universal Classic.

The film finds more of the sexuality and grounded nature of the story, choosing not to play with a more arched or campy tone as the revival play, that Langella starred in, was so keen on using.  Badham approaches everything with a more serious tone, never winking, or playing anything tongue-in-cheek.  The results are a film that methodically inches closer and closer to its inevitable confrontation of good versus evil.  Methodical yes, but never slow or what one would consider boring.  Rather the almost lackadaisical pace allows for the tension to slowly build over the course of the film.

Of course, the main attraction here is Frank Langella.  Literally, swooping into the film like David Bowie circa 1970, there isn’t a single frame that Langella’s count does not own.  Dracula in his hands is an overwrought man brimming with a voracious appetite for the most refined and coarse things in life.  No man, woman, child, or animal stands a chance against the sheer magnitude of Dracula in Langella’s hands.

Part of the fun of the film is watching Langella devour whole scenes even when facing off against the iconic Sir Laurence Olivier. Though Olivier by this point had health issues so severe it pained him to even walk.  No worry, as their three face-offs are some of the best of the Van Helsing Dracula face-offs on film.

Some will find Badham’s Dracula not as thrilling as say the Coppolla’s version but it was never intended to be “thrilling” per se.  Rather, this iteration’s intent is like it’s central protagonist; “to walk amongst its people, to take in the sights, the sounds, the everything”.  Or the most interesting of angles to approach Dracula; as a character piece.

The transfers are a tale of two cities…

The desaturated is the best in terms of clarity, and contrast.  The new transfer to HD works well. The theatrical color timing is actually a bit worn but that is probably because of the elements they had to use.  But they did create a 4K Transfer of this version.

The results, I sided more with the Theatrical Color timing as it felt less gimmicky and more of the era and how someone like Gil Taylor would have shot the film.  The desaturated is definitely looks cleaner and less worn.  But the nature and condition of the print they used for the Theatrical Color timing really does inform on the feel and leads to a better overall experience.

Then again… it is a matter of taste.  You be the judge!

Audio Commentary by John Badham is an archival one from the DVD release.  Much like Badham’s other commentary he covers all the bases and does so with a bit of wit and the air of a professor (it does help he is a professor of film studies, at USC if I’m not mistaken). Much of what is covered is the production of the film.  Though Badham is not shy about where he felt things went wrong and is critical of his work.  It’s a great all-around commentary track and worth listening or a re-listen.

Introduction by John Badham is a 70-second look at the differences in color timing by the director.

King of My Kind – John Badham Remembers Dracula is an all-new 32-minute interview with the director. The director does some overlap from his great commentary track. Here he talks about the business of how he came on board, the stage play, his knowing Frank Langella before the film, the adaptation and how much it differs from the stage play. A lot of the discussion is fascinatingly about tone and camp and how much of a challenge that was.

What Sad Music WD Richter and the Writing of Dracula is an all-new 33-minute interview with the writer. The screenwriter discusses getting hired, the stage show and how much it differs from the movie, tone, the nuts and bolts of adapting the book and molding it to Langella’s persona and performance (having already seen the actor on the stage), some transcriptions of development meetings, the actual writing, how Badham was as a collaborator, the fate of Van Helsing and other changes that were made, including the ending, and how it changed his career.

Interview with Editor John Bloom is an all-new 21-minute interview with the editor. The interview is very dry as Bloom recounts how he hired for the project, the editorial challenges during the shoot and post, and the release. It’s very good just requires a bit of patience as it is again a very dry interview.

Interview with Assistant Director Anthony Waye is an all-new 20-minute interview with the AD. Another very dry interview where the AD discusses how and who hired him and various anecdotes from the set including recounting the film’s ending, and a terrible accident.

Interview with production manager Hugh Harlow is an all-new 21-minute interview. He recounts his time with the production, the issues with Badham had with the English Crew, Gil Taylor coming on, the difference between Hammer and this Dracula, and another discussion of the finale. Note this one is another very dry interview.

Dracula’s Guest An Interview with Jim Alloway is an all-new 6-minute Interview with Camera Assistant. Alloway discusses his brief time on the set before he and the rest of the camera crew were replaced by Gil Taylor and his crew.

Interview with Make-Up Artist Peter Robb-King is an all-new 25-minute interview. Robb-King begins with a discussion of the trouble at the beginning of the filming with Badham adjusting to the English Crews and how they worked. Robb-King does a great job of discussing how he worked with Langella in crafting the perfect visual look for him, and even talking some production anecdotes about the troubles they had.

Dracula’s Guest an Interview with Colin Jamison is an all-new 5-minute interview with the Hair Stylist. Jamison discusses his time on the set and Langella’s very odd choice for hair and the fussiness the actor had with the “hair”.

The Revamping of Dracula is an archival 39-minute making-of with Comments by Frank Langella, Walter Murisch, John Badham, and WD Ritcher. Beginning with the Original Movies, and the Stage play, why Langella made the transition from Stage and Screen, Locations and adapting a highly stylized stage play to screen with real-life locations, the issues within the production, casting of actors including the legendary Laurence Olivier, visual references, reception of the film, this making-of covers all the bases including some great stories about Donald Pleasance just being a mensch of a scene-stealer. Langella is in particular quite delightful as he recounts the sexuality of the character, stage play, and eventual movie. The making-of has a wealth of behind-the-scenes photos, b-roll footage, storyboards.

Introduction by John Badham is a 70-second look at the differences in color timing by the director.

The theatrical trailer runs close to 2-minutes. Bonus: Don LaFontaine does the voiceover and it almost sounds exactly like his voiceover work on JAWS.

The Image Gallery has approximately 82 stills that can be paused but not navigated through.

Rounding out the special features are 3 Radio Spots featuring the voice of Don LaFontaine.