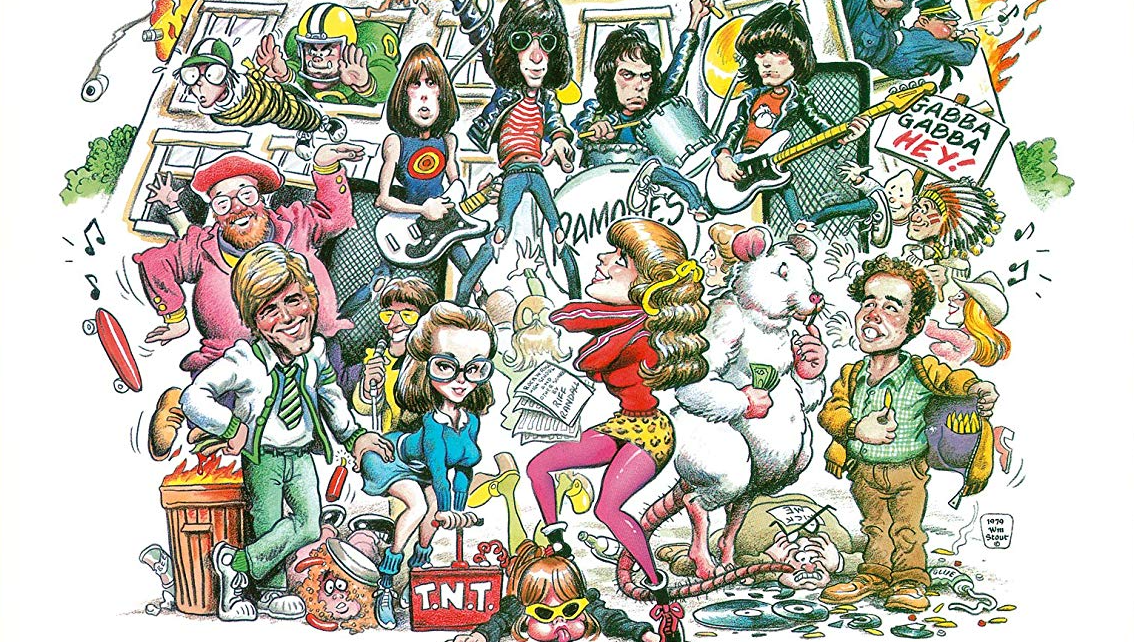 This Limited Edition Steelbook Blu-Ray from Shout Factory comes loaded with new extra features. Best of all; a new 4K remaster from the Negative!

Let us not mince words.  Rock ‘n Roll High School is still, after four decades, is the best of the best high school films.  Part goofy self-aware high school rebellion comedy, part self-aware musical ala A Hard Day’s Night the Allan Arkush directed film is still as fresh and fun as it was when it was released in 1979.

The inhabitants of Vince Lombardi High School are about to get a rude awakening.  The teachers and administrators have brought in a new Principal, Ms. Togar (the great Mary Woronov), to lay the law down.  Ms. Togar has aimed her venom and wrath at free spirit and rock ‘n roll lover Riff Randell (PJ Soles).  Riff and Togar go at it not just because of the music but the punk rock spirit that she’s infused the school with.  Add in Riff’s best friend Kate (Dey Young) and her favorite band The Ramones and you have an anarchistic good time that leads to an explosive ending.

Much of the charm of the film comes from the film is not being a Corman-produced usual affair.  In fact, there isn’t really any nudity or sex, or a plot involving sex, nudity, or having sex, or losing virginities.  This isn’t the Jack Hill directed softcore films.  This is nothing but good ole fashioned anarchistic fun with kids rebelling and listening to The Ramones and that’s about it.

Well, there’s ample amount of weed, and supposed “hooking up” but the “hooking up” doesn’t really happen.  This is the film’s strength and what separates it from even modern films.  The film cares nothing about hooking boys with girls… in fact; Riff cares nothing of hooking up with a hot boy or even really hooking up with the Ramones.  Riff wants her songs to be sung by the Ramones.  That idea is what motivates everything that Riff does in the film.  Even now, forty years on, Riff’s motivations are still as fresh as they were when the film was released which is both amazing and quite sad as to what it says about the High School movie subgenre.

By dropping all the “commercial” aspects of Corman’s films at the time, and adding in what would be staples of the genre moving forward (specifically amazing soundtrack).  Rock ‘n Roll High School is not just a classic, but a film that is as fresh today as it was back in 1979.

Any fan of this film will want to pay for this limited steelbook edition because of the new 4K Scan from the Original Camera Negative is nothing short of amazing.  The previous Blu-Rays are solid but this newest edition just blows them out of the water.  The old Blu-Ray appears a bit washed out compared to the beautiful color image.  The image looks beautifully sharp and with the right amount of grain structure that literally makes it look like the best 35mm archival print.  Bravo to Shout Factory for taking the time to create a new transfer.

The first Commentary by Allan Arkush with writers Mike Finnell and Richard Whitely is very honest with what exactly was directed by Joe Dante and The Zucker Brothers. The commentary is focused on the production of the film with lots of production anecdotes Crom the time (I did not know that Dennis Quaid was married to PJ Soles). The discussion is fast, loose, and hilarious much like Roger Corman’s production. Anyone who hasn’t listened to this archival commentary and is interested in what a Corman film was like to make this is the commentary to listen to.

The next commentary is by Arkush and actors PJ Soles and Clint Howard. The director discusses Soles and Howard’s experiences during the production and the history of the film post-release. All recorded together it’s a fun commentary as they discuss the movie. The Soles discussion about a Jacket and Rod Stewart at Fred Siegels is worth it alone. Arkush relays how he’s related to the formation of the New York Dolls. Much of the discussion is personal histories and a lot about their relationship with the Ramones. The three of them are pretty amazing as all lived varied lives.

The writers’ commentary by Richard Whitley and Russ Dvocnh. The commentary itself is very nuts and bolts with a sly wit throughout. Whitley and Dvonch really do go into some good writing advice and production anecdotes. Some of the pearls they discuss like Eddie Dezen and where his specific comedy thing he does.

The final commentary features Roger Corman and actress Dey Young. This commentary is a bit more sparse than the other. This is a pretty great commentary nonetheless with Corman dispensing a lot of knowledge about not only the production but the many actors and directors that have worked for him. Young does discuss a lot of her experience during the film but her personal life. The combination does really work and is a fun commentary.

Class of ‘79: 40 years of Rock n Roll High School is an all-new 70-minute making-of featurette. Starring Allan Arkush, Joe Dante, PJ Soles, Richard Whitley, Russ Dvonch, Dean Cundey, and Larry Bock. The documentary is divided, cleverly I might add, into 4 “sides” with a fun vinyl graphic. The documentary covers everything and anything you’d want to know about the origins, development, making-of, and post-release. This just doesn’t cover Rock n Roll High School but they milieu around API and Corman’s studio that ended up producing not only Rock n Roll High School but Grand Theft Auto, Hollywood Boulevard. We learn what a Corman Vacation was. The realities of working for Corman was like. The complicated mess it was to direct Rock n Roll High School. The procuring of the music and specifically how the Ramones appeared. They do discuss, in detail, how Joe Dante and the Zucker Brothers helped Arkush to finish the film. How the sound mix was done in 1.5 days! The “test screening” process, which is hilarious and fascinating, that may be one of the best stories about this process. They go into detail in the growing love post-release, which it was not a hit, but evolved into a cult film. There’s lots of b-Roll 8mm and 16mm footage. Footage from different films and photos of the era.

Allan Arkush’s 2019 Sunday Slasher Rock n Roll High School intro is an all-new 5.5-minute introduction. It’s a great intro he did for the Chattanooga Film Festival this year. His video intro includes some great photos and how much Riff Randell has effected so many high schoolers and women.

Back to School: A Retrospective is a 24-minute archival making-of. A lot of what’s covered in more detail in the new making-of. Though this documentary abbreviated does include comments by Corman, Marky Ramone, Dey Young, Mary Woronov and Clint Howard who didn’t appear in the newer making-of.

Staying After Class: An Interview with Actors PJ Soles, Vincent Van Patten, and Dey Young is a 16-minute group interview filmed at what looks like Van Nuys High. Beginning with the actors look at PJ’s collection of mementos from the production and some gossip that another star that was to be cast as Riff the actors dive very lively into how they got cast and their experiences on the set and life after the film was released.

Interview with Roger Corman conducted by Leonard Maltin is an archival 5-minute interview from the DVD days. Much of the information is already in the other featurette a but hearing Corman discuss this film is a delight and hearing Corman says “anarchy” is especially so.

Interview with Allan Arkush is an archival 11-minute interview with the director discussing how he became to want to be a director which was tied to music which would eventually inform on his making Rock n Roll High School.

Audio Outtakes from The Roxy is 15-minutes of audio from the Roxy concert during filming. Framed with the poster of the film the mono recorded music is like a great bootleg from the era. Ramones fans will love this raw energetic performance.