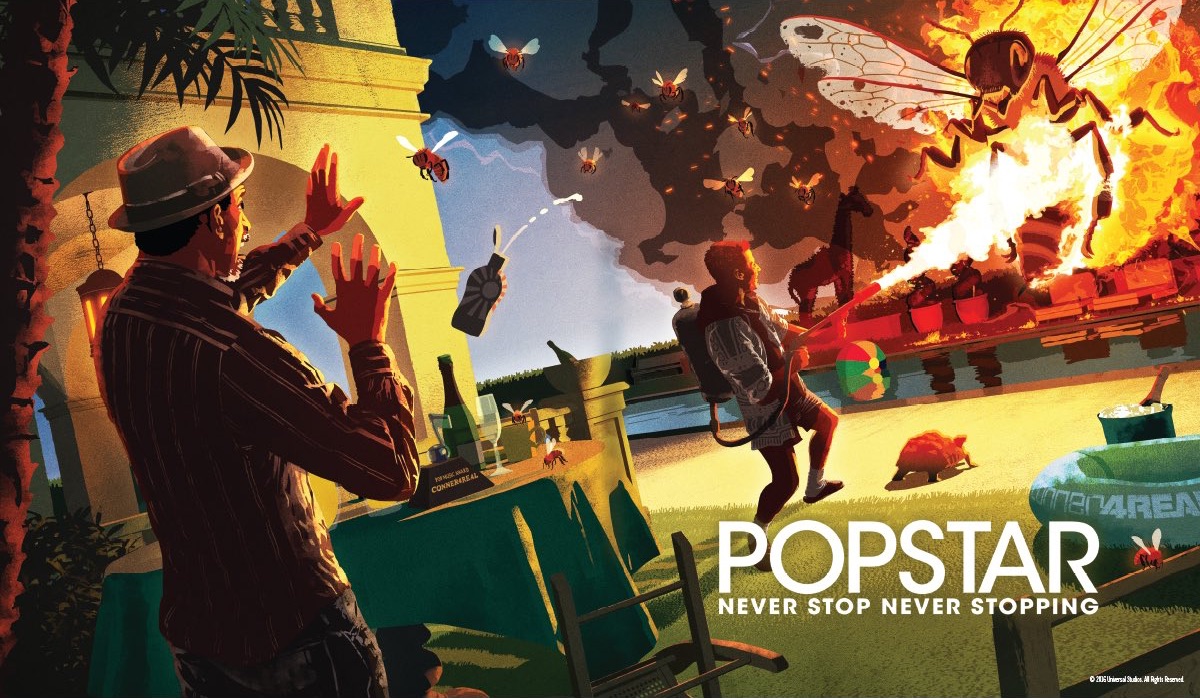 Comedy is as subjective a film genre as any.  What passes for funny to one person could offend another.  It is part of the reason you do not often see coverage for comedies on this website.  All that being said, one who doesn’t find humor and some heart in the satiric mockumentary Popstar: Never Stop Never Stopping doesn’t have a sense of humor.  There.  I said it.  The film Produced/Directed/Written/Starring the Lonely Island Boys (made up of Andy Samberg, Akiva Schaffer, and Jorma Taccone) has made the best comedy in the last five years.

A “Documentary” crew is following one of the most famous Popstars in the world; Conner 4Real (Samberg) as he is about to release his second album and embark on his biggest tour yet.  Conner has ego, hubris, arrogance, and stupidity enough for three Kanye’s and another three Beiber’s.  The realities of his tour, his album, his sponsorship, and his relationship come quickly crashing down. Conner continues to think he’s done this on his own and the world wants him still (they don’t). But Conner wasn’t always like this.  He had a band The Style Boyz.  He had bandmates; Owen (Taccone) and Lawerence (Schaffer).  He had talent and heart to spare.  As he’s bottomed out, Conner begins to realize that maybe to go, father, you have to go back…

Now, let us be clear.  This is not a drama.  In any way shape or form.  Popstar: Never Stop Never Stopping is designed to make you laugh from start to finish.  It is smart enough to understand not only the current iteration of Popstar but the media landscape they inhabit.  The film’s jokes come a mile a minute and are designed for repeated viewings.  Even the cameos which inform on the comedy come so fast you’ll have to watch it twice.  This is not something just lampooning Stardom but everything about our celebrity culture.  This is the type of film that not only manages to make as many dick-jokes as humanly possible but cuts Tabloid journalism to shreds.  No stone is left unturned but is done with the smarts that you expect from Lonely Island.

Popstar: Never Stop Never Stopping is not meant for reviewing but watching.  This reviewer cannot recommend the film enough. It’s the best fucking comedy to be released in a long while.

Plus, where else are you going to see both A$AP Rocky and Ringo Starr in the same film?

It appears that Shout was provided with the same stellar transfer from the original release. It should be noted this transfer is pretty great considering there are multiple video formats they’re working with and how unified the transfer looks.

The audio commentary by Samberg, Schaffer, and Taccone (on a phone the entire commentary). The group delivers a lively fun and wry commentary. They discuss with a lot of humor and great information on the production. They really do break down on how they did some of the bigger moments of the film (including inserts from One Direction). Note this along with the rest of the special features are from the original Blu-Ray disc.

Deleted Scenes amounts to 43-minutes of not only deleted scenes but extended scenes. You can play them individually or all at once. There are multiple pieces that could have been added, like the expansion of Tilly’s (Conner’s mom played by Joan Cusack) character in multiple scenes.  There is a lot to go through and all of it worthwhile.

Gag reel is 3.5-minute of people breaking from the various cast and cameos from the film. This one is more entertaining than others as the cameos breaking are pretty fun.

Interview Outtakes is 7-minutes of extended and new interview cameos. Arcade Fire, Rza, and others join in the fun. There are some great moments here. The Connor 4real musical inspirations should have been placed in the film.

Bonus Footage is about 10-minutes if extra footage exited together. Some great moments from Connor being on Seth Meyer’s Late Night Show, Connor on the Big Boi show, and other bits.

How to Donkey Roll is 1-minute of hilarious how-to-do the donkey roll.

Big Boy Freestyle is 2-minute extended but that’s pretty hilarious. Connor going with his own version of his freestyle.

Shooting Hoops is a 1-minute extended moment from the opening scene with Connor on the basketball court with Connor saying a certain “Kingly” basketball superstars name after he tries to make a basket.

“Turn up the Beef” backstory is a 50-second extended gag with the FRIENDS theme song. The people they get to with a straight face to talk about that theme song is too good to discuss.

Sex tape is a 1-minute scene with Big Boy laying down the gossip on Connor’s sex tape (or lack thereof).

Fun at CMZ is 6-minutes and five extended versions of the TMZ-style sections of the film starring Will Arnett, Chelsea Peretti, Mike Birbiglia, and Eric Andre. You can play them individually or all at once.

Popstar Never Stop Never Stopping is an all-timer.  Shout Factory has given us a beautiful Steelbook.  HIGHEST POSSIBLE RECOMMENDATIONS!!!!