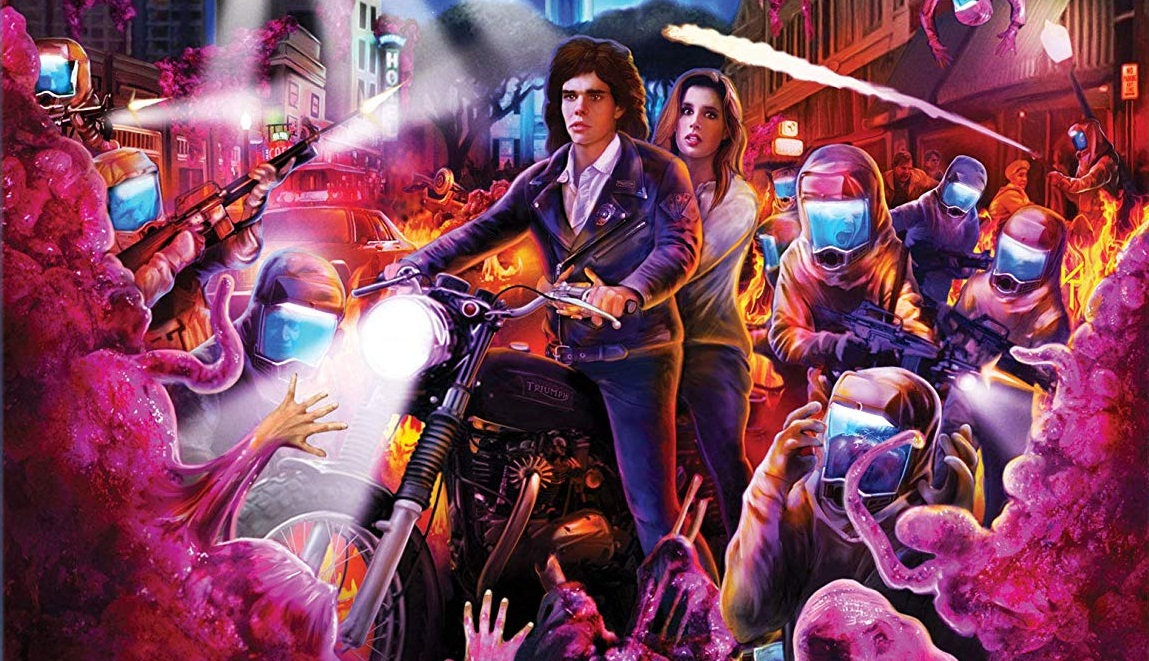 Chuck Russell’s Modern update to The Blob is far superior to the 1950’s Drive-In Classic.  Scream Factory has produced a filled-to-the-gills Special Edition worthy of the Neo-Classic.

Few films get the remaking of a classic as right as Chuck Russell’s The Blob.  Much like John Carpenter’s The Thing, was a failure upon release.  Like the Carpenter film, Russell’s remake is as mean, gross, and darkly humorous and any horror fan could want.

A Snow town in Colorado is visited by what at first appears to be an alien lifeform.  That lifeform is a gelatinous blob can digest anything but specifically has a craving for animals of the human varietal.  Our only hope against this is a group of teenagers whom no one seems to believe.  As these teens begin to slowly fight for their town and families, we find that there appears to be more to the story than aliens.

Russell takes what could have been, and was in the 1950s original, a jokey premise and took it the right amount of serious.  The script by Russell and Frank Darabont (yes, that Darabont) craft a story that is front-loaded with human drama. That is the film’s secret weapon, along with a mean streak a mile wide.  These contrasting ideas make the perfect complement during the film’s cracklingly good pop set pieces.  Rather than fodder for the blob, the characters are actual humans that you want to see survive.

This 1988 iteration is not a stiff affair in the least.  Rather, it understands the material and approaches everything with none of the arched type of tone that one would think but still managing to be a bit playful especially with some great retorts to a few terrible characters with some truly fitting deaths for.  It’s the kind of smart horror one doesn’t expect at the end of the ’80s where the jokey slasher was king.

Grab the popcorn, candy, and soda.  Make a pillow fort.  Watch The Blob on the biggest screen the closest you can the loudest you can.  It’s that kina movie.

The transfer is decent.  It appears to be the same transfer from the Umbrella Entertainment disc a few years back.  Which also is the same one from the Twilight Time limited edition.  The transfer reproduces the color and contrast levels proficiently but one wishes that a new transfer was generated.  It’s still a good transfer provided by Sony.

The Audio Commentary hosted by Joe Lynch with director Chuck Russell, Cinematographer Mark Irwin, and FX artist Tony Gardner is fantastic. Lynch as a filmmaker and podcaster knows the right questions to ask and the flow to allow Russell, Irwin, and Gardner maximum information and entertainment. The entire commentary is a lively affair with Lynch recounting his childhood memories of seeing the film in the theater, Fangoria issues, and trailers. Russell gives a lot of insight as to why it is as a failure (because of Regime change at Tristar), how he approached making the film scary, the quick turn around on post-production and other great production anecdotes. Irwin and Gardner contribute a lot to the technical aspects of the production and how difficult the FX work was. Listen for the various films that Russell shot at Griffith Park including The Blob.

The next commentary is a solo one with actress Shawnee Smith. The track hosted by John Beam of shout Factory is a laid back affair with Beam prompting Smith questions. Smith admits that she’s not seen the film in decades. The actress is great commentator discussing not only the film, but her life, film, music, and horror. The commentary is a delight and manages to drop a bit of knowledge about the Larry Hagman Blob sequel from the 1970s. Though be forewarned the commentary is edited so there are moments when the commentary drops in and out.

The final audio commentary included is with Russell joined by Blumhouse Halloween (2018) Producer Ryan Tyrek. Ported over from the Twilight Time Blu-Ray, this is a fantastic commentary and does not have much cross over from the Lynch hosted commentary. This commentary is a bit more technical. Some of the best anecdotes are how Russell brought on various crew members like Darabont, Irwin and how those relationships evolved.

It Fell From the Sky! Is Part one (23-minute) of a two-part interview with director/co-writer Chuck Russell. As with many of the more recent Scream Factory! entires there’s a question prompt title card. Russell is a great interview beginning with where his interest in creating stories beginning with theaters as a kid. Russell in this first part discusses his love of silent film, comedy, where he went to school, a mentor who inspired him, how he loved improv, moving to LA, being hired on Dreamscape, meeting Frank Darabont, being hired on at PA at Stunts Unlimited and how much that and being an Assistant Director informed his career. He also discusses his major films in the first part of his career like Hell Night, and advice he got from Bob Shaye (New Line’s Head of Production) during Nightmare on Elm St. Part 3, and The Mask.

I Killed the Strawberry is Part two (27-minute) of the two-part interview with Director/Co-Writer Chuck Russell. As with many of the more recent Scream Factory! entires there’s a question prompt title card. Russell discusses the technical and honest reasons why he chose The Blob. Russell discusses Jack Harris giving him a chance, how his friendship with Frank Darabont informed on their working relationship, the makeup FX. It’s a great interview that doesn’t go over the same details and anecdotes in the three commentaries.

We Have Work To Do is a new 14-minute interview with Jeffery DeMunn. Like the Russell the interview has question prompt title cards. DeMunn discusses his early life and his first experience with acting, how he went to school initially for electrical engineering but quickly turned to acting and the theater to his first acting gigs and lessons learned working.

Minding the Diner is an all-new 17-minute interview with Candy Clark. Like the DeMunn the interview has question prompt title cards. The most refreshing aspect of the interview is how honest Clark is about her growing up. Clark discusses her modeling career and her just wanting to be an extra. Some of the anecdotes she has are too good to ruin but she does make references to a very iconic film. It’s a great all-around interview.

They Call Me Mellow Purple is an all-new 15-minute interview with actor Donovan Leitch Jr who plays Paul Taylor who was the Steve McQueen role. Like Clark, the interview has question prompt title cards. Leitch who grew up in Hollywood discusses his upbringing always wanting to be an actor.  Leitch does discuss the casting process and his time during production.

Try to Scream is an all-new 18-minute interview with actor Bill Moseley who has a big part in the film. Like the Leitch, the interview has question prompt title cards. The actor discusses his childhood with bouts of acting and sneaking out to the living room to watch old sci-fi and horror films late at nice. Moseley discusses his first time seeing the original and how it left an indelible mark on him. The excitement of getting the part in a time I’d need.

Shoot Him! is an all-new 18-minute interview with cinematographer Mark Irwin. Like the Moseley, the interview has question prompt title cards. Irwin does not waste time with his origins rather goes into discussing the story and the approach to shooting the film and the style that Chuck Russell wanted to achieve visually. This is a very technical based interview as Irwin discusses on-set lighting issues with various pieces of the film.

I Want That Organism Alive! is an all-new 12-minute interview with “Blob Mechanic” Peter Abrahamson. Like Irwin, the interview has question prompt title cards. Like many guys his age he discusses his Empire Strikes Back love that brought him to USC and eventually gets hired to do FX on The Blob through relationships not from being a USC student. Abrahamson like Irwin’s interview is tech-based as he discusses the FX work he eventually did on the film.

Gardner’s Grus Crew is an all-new 28-minute featurette that combines b-roll and behind the scenes footage. The score from composers Michael Hoenig and J. Peter Robinson is used for score.  We watch as they apply the plaster and molding agents to Leitch’s head for the casting of his head. This kind of footage you rarely see anymore included … anywhere but on a Scream Factory Disc that is. Bravo for them in including this footage of Leitch getting his head cast, in real-time.

Incredible Melting Man is an all-new 22-minute interview with SFX artist Tony Gardner.  Like Abrahamson’s interview, this interview has question prompt title cards.  Beginning with his origins with the likes of Stan Winston and Rick Baker, Gardner recalls his time in the 80s on other features before deep-diving into the work he did on The Blob.  It’s a great tech-savvy interview that FX fans will not want to miss.

Monster Math is an all-new 26-minute interview with SFX Supervisor Christopher Gilman.  Like Gardner’s interview, this interview has question prompt title cards.  I will say this, Gilman has had a varied career in and out of Hollywood. There are a few things that are too good to ruin but needless to say this reviewer was highly entertained by the varied work and with certain legends in Hollywood before becoming an SFX Supervisor.

Haddonfield to Arborville is an all-new 21-minute interview with Production Designer Craig Sterns.  Like Gilman’s interview, this interview has question prompt title cards.  As the title suggests Sterns discusses his work with JohnCarpenter on Halloween and other projects before moving onto The Blob. Another great technical interview.

The Secret of the Ooze is an all-new 20-minute interview with Mechanical Designer Mark Setrakian.  Like Sterns’ interview, this interview has question prompt title cards.  Beginning with his love of Universal Monster Movies, Setrakian gives us a detailed look at what it took to create the various appendagies and the Blob itself.  Don’t want to give anything away as this one is really fascinating.

Rounding out the special features are Theatrical Trailers, a TV Spot and a Still Gallery.  The two trailers run about 3-minutes combined. The 30-second TV Spot is exactly what you would expect. The Still Gallery runs automatically and cannot be navigated through, the 65 images consist of Production Stills, some Poster Art, News Ads, and some great Japanese Promotional Art.

The Blob is a neo-classic in the same way that The Fly (1986) and John Carpenter’s The Thing (1982) are remakes that upped the ante.  Scream Factory has done an exemplary job with their new special features.  HIGHEST POSSIBLE RECOMMENDATIONS!!!