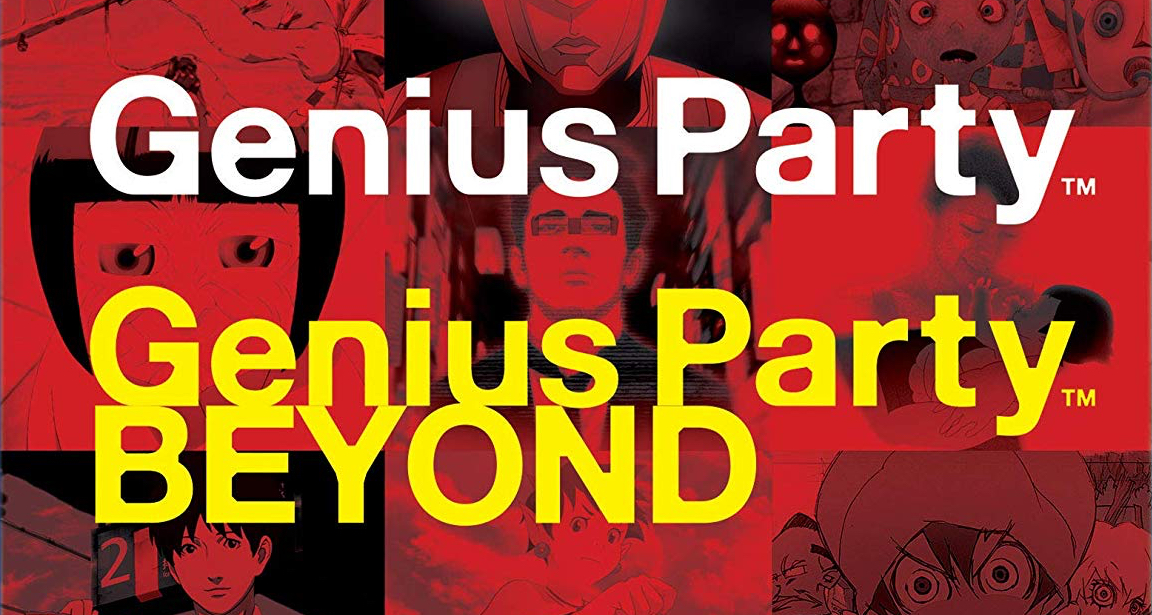 Shout Factory/GKIDS is back with another collected Anime work. This time it’s the one-two punch from STUDIO 4°C; Genius Party and Beyond Genius Party.

Note: Instead of reviewing as a whole I’ve reviewed the individual short films themselves.

More of a title sequence and musical interlude than actual short.  Though the visuals are stunning.  The short introduces us to the theme of Genius Party. A human dressed in what appears to be ancient Bird-like garb invokes the spirits of a series of alien skulls.  These alien skulls begin to interact with one another to dramatic effect.

By far the best of the shorts.  The story begins with a small Chinese boy finding a very special takes an idea and makes it so character-based and such a handmade throw back to why so many of us loved watching Saturday Morning Anime. Though it never feels like some sort of cooler than cool take.  There is so much heart and soul that went into this by the time the short ends you’ll want an entire series following these characters.

A clever twist on the Zombie and Superhero tropes.  The most astounding part of this short is that it was at least five years before both the Zombie and Superhero genres would really gain footing in the mainstream. What begins as a simple task turns into a herculean effort from a small band of young but very special Zombies.  Director Shinji Kimura takes the Kids on an Adventure plot to a strange but wonderfully original end.

Duality played out both as literal and metaphysical could have been eyerollingly bad but in the hands of director Yoji Fukuyama it because this almost DePalma-esque play on duality.  One wonders how this would play out as a full feature as it definitely plays with the kinds of story elements that made the late Satoshi Kon’s Perfect Blue such an amazing film.

Whatever they were going for… I wasn’t sure I was on board for.  Having watched the short three times I’m still confused by the rambling-stream-of-consciousness-visuals that play out and what it’s all about and what’s it all mean.  I understand it’s about a Salary Man’s existential crisis but … it just didn’t work for me.

What I love most about shorts are the ability to go as far to an extreme that you would like. Shorts can be experimental and fail without much uproar (see Limit Cycle).  When they do out out of the lines, and they connect… it can be one of the more joyous things in cinema.  Director Masaaki Yuasa’s eccentric baby lost on an alien planet as it tries to find its way is the kind of expression and different style of storytelling in sci-fi films we just don’t get enough of.  Almost impressionistic, hell very impressionistic take on the dangers of being a baby on earth connects in a way that you do not expect.  Brilliant use of the medium with amazing results and in a way a strange riff on The Little Prince and that specific minimalist world.

Sometimes things can just be simple but directly emotional.  Of course, if your director Shinichirō Watanabe (those not in the anime know, he’s the director/creator of Cowboy Bebop, Samurai Champloo and Space Dandy) you’ll throw in a piece of dymanic lunacy or four into the procedings.  As much action bizarreness is thrown our way, the story is always focused on the simple truth of two friends having to part.  A wonderful piece of teenage emotional storytelling.

Begins with what appears to be in a Fantasy world nothing like ours.  As a meteorite hits the ground and the townsfolk see it as something evil, they begin to destroy it.  Little do they know that it may be more complex than initially thought.  Director Mahiro Maeda creates one of my favorite troupes in all of cinema, be it short or feature length. The “things are not always what they appear”.  The short takes that particular troupe to it’s logical and very fun conclusion.  Much like the opening of the original Genius Party, it sets the right wild tone that will play over the course of the other shorts.

Just plain nutty.  The kind of hyper-active sort of anime that feels more stylistic than narrative.  The setup is simple, in search of a treasure a criminal goes insane with some dire results that are equal parts hilarious and frightening.  Director Kazuto Nakazawa takes that street graffiti aesthetics making what is the equivalent of a moving Ralph Steadman drawing.

Similarly themed as Happy Machine but rather than use Sci-Fi troupes to look at the fears of early childhood.  Director Shinya Ohira and Company use the dream-like logic and imagery from other children’s fantasies like Alice in Wonderlandand the Wizard of Oz to illustrate its point. The almost wordless short feels like some Watercolor drawn children’s book come to life.  The results are as impressionistic as Anime comes.

The best of the shorts in this collection.  The set-up is simple.  A woman has created an illegal amalgamation of creature and toy.  The authorities in this world have come to “take care of” the illegal creations.  What director Tatsuyuki Tanaka has done so beautiful in the short is create a much-much-much larger world with a minimal to no dialog or plot.  It’s through the animation, shot selection, sound design that allows us to view a rundown world of what appears to be low-fantasy and low-steampunk.  As is the greatest compliment one can make about a Short is that one wants to see more of both the world that’s created and the work of the creatives behind the Short.

Wow.  Director Koji Morimoto’s invokes the style and visual bursts of imaginations that fellow director Satoshi Kon would evolve to perfection with his last feature film.  Morimoto’s multi-dimensional relationship sci-fi thriller is almost too strange and fantastical to really describe.  The visual acumen that Director Morimoto is able to exude should be no surprise to the audiences that have seen the visual splendor that is Mind Game.

Shout Factory has been given impeccable materials to work with. Both films look gorgeously reproduced on Blu-Ray.

No extras are included.

GKIDS/Shout Factory has continued to really put love and care into their Animation release. Genius Party and Beyond Genius Party are great anthology films. RECOMMENDED!!!!!