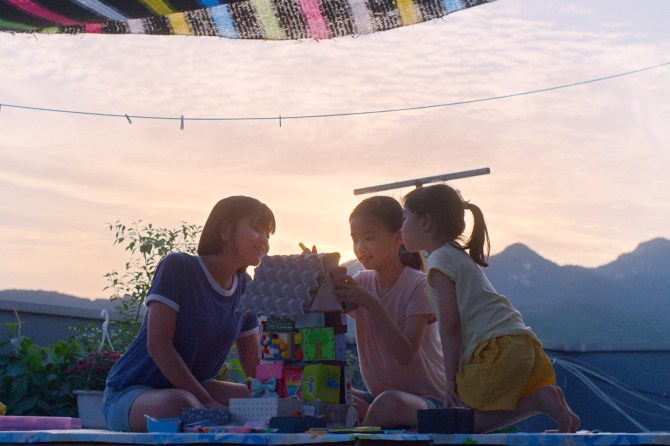 Korean family drama at its finest, with a focus on a trio of young girls who just want a regular family life.

In all honesty if The House of Us was in Japanese I would immediately assume that it was the next story from Hirokazu Kore-eda. But it’s actually a Korean film from director Yoon Ga-eun who elicits excellent performances from her three young leads to produce a heart-breaking reflection on family and absent parents.

The story is seen through the eyes of Hana (Kim Na-yeon), an 11-year-old fearful that her parents’ constant arguing is the end of her family. She hopes that cooking for them all and a family trip to the seaside will be enough to make things right again. While out grocery shopping she encounters Yoo-mi (Kim Si-ah) and her little sister Yu-jin (Joo Ye-rim) who appear to have been abandoned for work reasons by their parents. Their uncle, who is supposed to be taking care of them in the meantime, just never appears and the youngsters appear to be fending for themselves.

Bereft of the family they would like to have, the three girls set about forming their own little unit and set off to make their dreams come true.

Charming and sad in equal measure, The House of Us also manages a side-swipe at parents who work so hard that they don’t have time for their families, as well as highlighting the different fates awaiting the children of affluent and less-affluent parents. Add in money-grabbing landladies and lifestyle-aspirational tenants, Korean society takes a bit of a kicking to be honest.

The film would not be as good as it is though without the three young leads, and there can be little doubt that Yoon Ga-eun has found a way to get the absolute best and natural performances from the girls. They are each able to convey the true fun and imagination of children at play, while at the same time displaying the vulnerability of children who, quite frankly, miss their parents and a ‘normal’ family life.