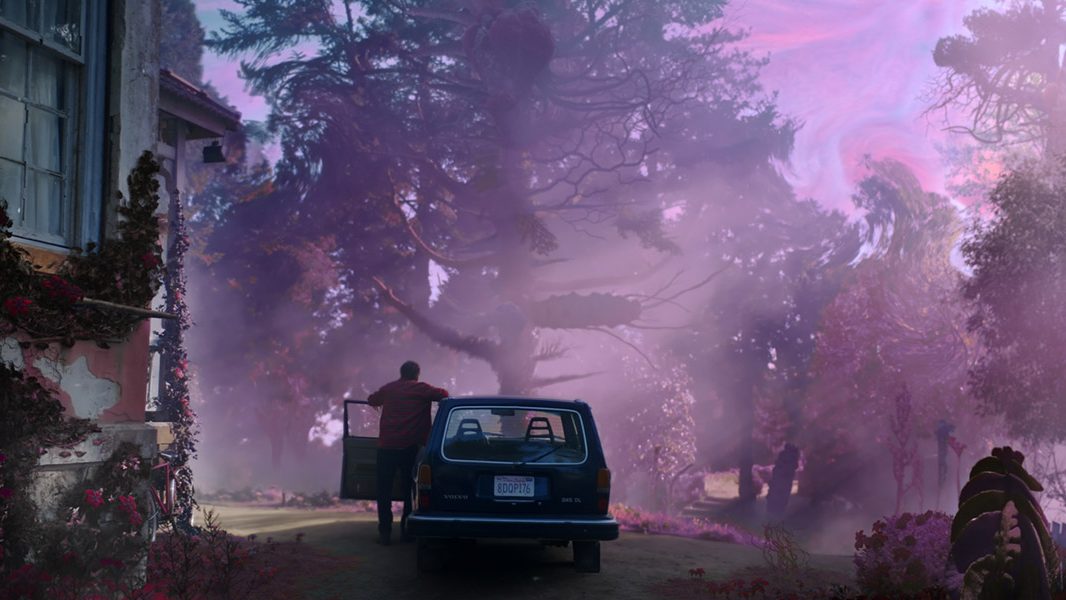 The stories of H.P. Lovecraft are notoriously hard to adapt to a visual medium. His work doesn’t feature slashers, vampires, zombies or any other standard horror tropes. Lovecraft wrote of madness, insanity and the ways in which other realities and dimensions overlap with our own. He focused on “otherness” and the way it bleeds into our world and touches us.

These types of internal horrors and themes are hard to depict on the big (or small) screen. With Color Out of Space, director Richard Stanley gives us one of the best Lovecraft adaptations on record. In the film, a meteorite crash lands behind the house owned by Nathan and Theresa Gardner (Nicolas Cage, Joely Richardson). It’s a curious event for the local media, but for the Gardners it becomes something much more than that. Their surroundings begin to change. They begin to evolve (devolve?) into something else, something “other”.

The meteorite crash is a brilliantly simple answer to the primary question that always comes when you adapt Lovecraft for the screen: why is all of this happening? It’s a natural question for any audience to have, but it’s one Lovecraft never addressed in his fiction. In his written works, the horror and the otherness simply “is” like gravity or a sunrise. Lovecraft never tackled the issue of “why” in any comprehensible way. However, going all the way back to The Lonesome Death of Jordy Verrill segment of Creepshow, audiences can accept the basic idea that meteorites can make weird shit happen. And that simple plot device shifts our focus from Why? to What? and allows the audience the mental freedom to go along for the ride.

The key to the film is its production design and cinematography. The environment is intermittently bathed in otherworldly fluorescence as the characters see shimmery images of flora and fauna from another dimension. In one blink of an eye, alien vegetation is taking over the backyard of the Gardner’s home. In the next blink, all appears to be normal. It has the look of the translucent, glowing worlds that marine biologists find in the depths of the ocean.

The film treats the Gardner’s exposure to “alien-ness” much like exposure to radiation. They begin to change mentally and physically. The conceit plays well into the Cage-isms of its leading man. Thankfully, Cage is not in full manic mode in this performance, but when his over-the-top-ness breaks through it plays as a man who’s losing his grip on reality. He experiences moments of madness, but they don’t dominate.

Color Out of Space also features some great practical effects and make-up work that are reminiscent of Rob Bottin’s work in The Thing. The Gardners own an alpaca farm, and the animals begin to morph and evolve much like the humans do. Sometimes in more gruesome configurations than our leading characters. The third act of the film becomes a special effects and lighting extravaganza as things spin farther out of control. By that point, the audience has either bought into the narrative or not. The gonzo ending did not detract from the film for me because the groundwork had been so masterfully laid during the first two-thirds of the film.

My anticipation of Color Out of Space has waxed and waned since I heard it was going into production. My first thought was: Nicolas Cage and Lovecraft? That’s gonna be a disaster. Then I saw Mandy and realized that with the right director, there’s still a helluva actor trapped inside all the method ticks and mannerisms. We may never get Guillermo del Toro’s In the Mountains of Madness, but that’s okay. We got Richard Stanley’s Color Out of Space, instead.

1 comment on “Color Out of Space: Fantastic Fest 2019 Film Review”