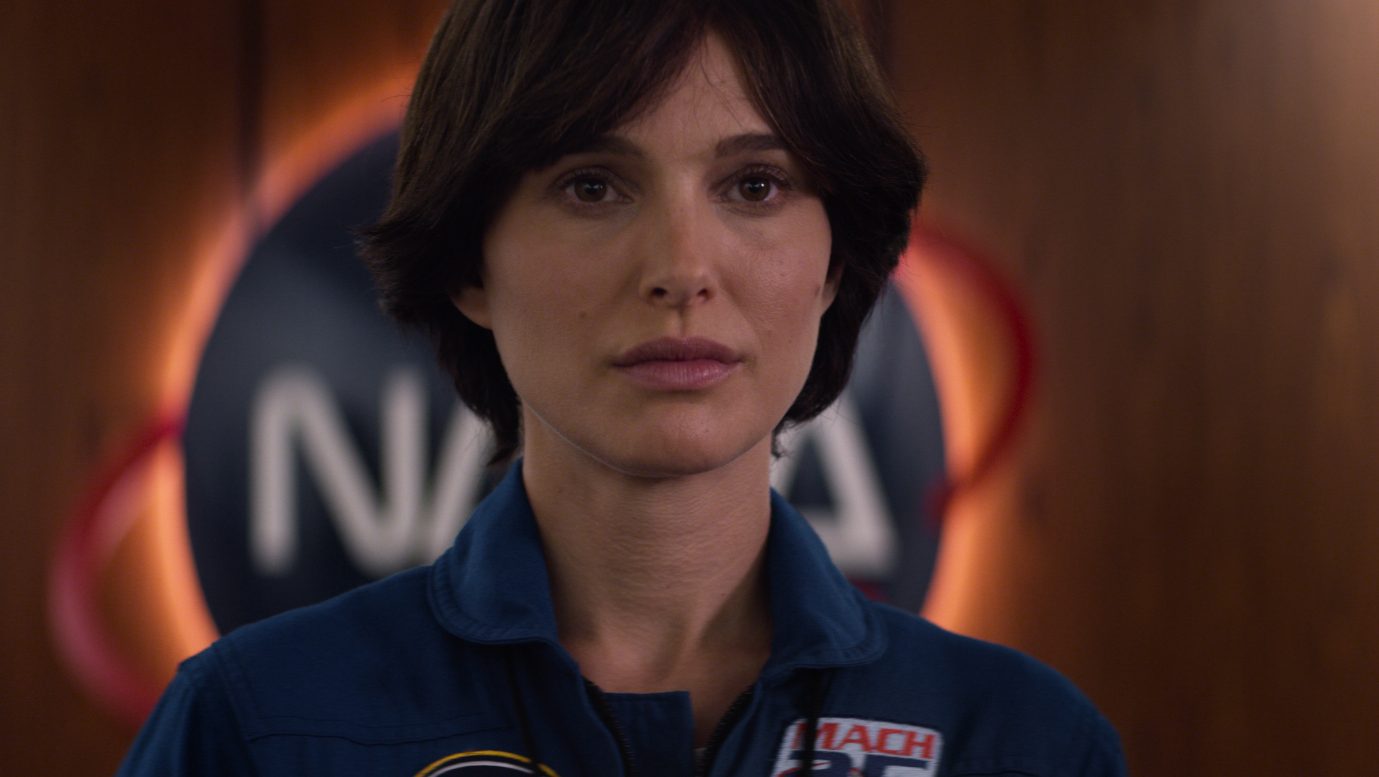 Natalie Portman and Noah Hawley team up for this Based-On-True-Events Biopic. The results are spectacular, but not in the way you may think with such a salacious subject.

Those expecting Lucy in the Sky to be a salacious tale of adultery, obsession, kidnapping, and adult diapers something akin to Fatal Attraction lunacy will be sadly disappointed.  What one does get is a densely layered portrait of mental wellness and stress.

Astronaut Lucy Cola (Natalie Portman) has been in space for 8-days.  She is a part of an elite group of men and women who have left and returned to our blue dot in the universe.  Cola comes back changed but unable to articulate that change to her loving husband (Dan Stevens sporting a hearty mustache), her grandmother (Ellen Burstyn in full crank-swearing cogger mode), or her live-in niece (Pearl Amanda Dickson).  That change though is something shared by fellow Astronaut Mark Goodwin (Jon Hamm) or so she thinks.  As pressures enclose on Lucy and cracks appear who is there to help someone who’s so driven and determined they don’t even realize they need any help.

Natalie Portman continues to amaze with her taste in roles.  Lucy Cola is both a transparent character and an enigma.  Portman is able to make that dichotomy of character a transfixing asset.  Large portions of the film require Portman’s physical and emotional life to be played on her face and through her body language.  Though Lucy is loquacious when needed, it’s the inner turmoil and wellspring of emotion that she is unable to truly articulate is where Portman shines as a performer.  The sense of verisimilitude that she brings to the moments where Lucy can see her life, both personal and professional; crumbling to pieces is some of the more powerful work done by an actress this year.  Portman never plays Lucy as a victim but rather a woman in uncharted territory trying to find her way through with the same sort of assertive power she has brought to everything in her life.

How the film is able to convex with her performance, succeeding with a visual style that feels like a physical manifestation of Lucy’s mental wellness is one of many flourishes that director Noah Hawley brings to the film.  Everything Hawley does as a director is in service of Natalie Portman’s Lucy.  Rather than creating an empty showy visual style that is in service to his own ego. Hawley having refined his style on his FX Series Legion comes fully formed to his debut feature film. His direction, though stylish, is always in service of Portman’s character.

Hawley and Cinematographer Polly Morgan’s use of multiple aspect ratios at first seems to be some sort of gimmick. The further Lucy in the Sky goes the more and more it becomes apparent that the style is tied to Lucy’s view of the world.  The 1.33 frame that alternately slides in and out of 1.85 to 2.39 to even 2.66 allows for us to feel Lucy’s claustrophobia on Earth.  It also plays as much as a release valve of sorts for the audience, opening up to the wide expanse of space in the Widescreen framing, as it does for Lucy in those moments of clarity that she has.

Lucy in the Sky is a movie of quiet power.  Many will expect certain troupes to come to life as the third act occurs.  The brilliance of the film is never becoming so genre-centric or lowering itself for the sake of an audience thrill.  Rather the film chooses to be empathetic towards its subject, seeing beyond the tabloid fodder.  Finding compassion for someone rather than a quick easy to digest label is one of the more compelling aspects of Lucy in the Sky.

Lucy in the Sky is in theaters October 4th