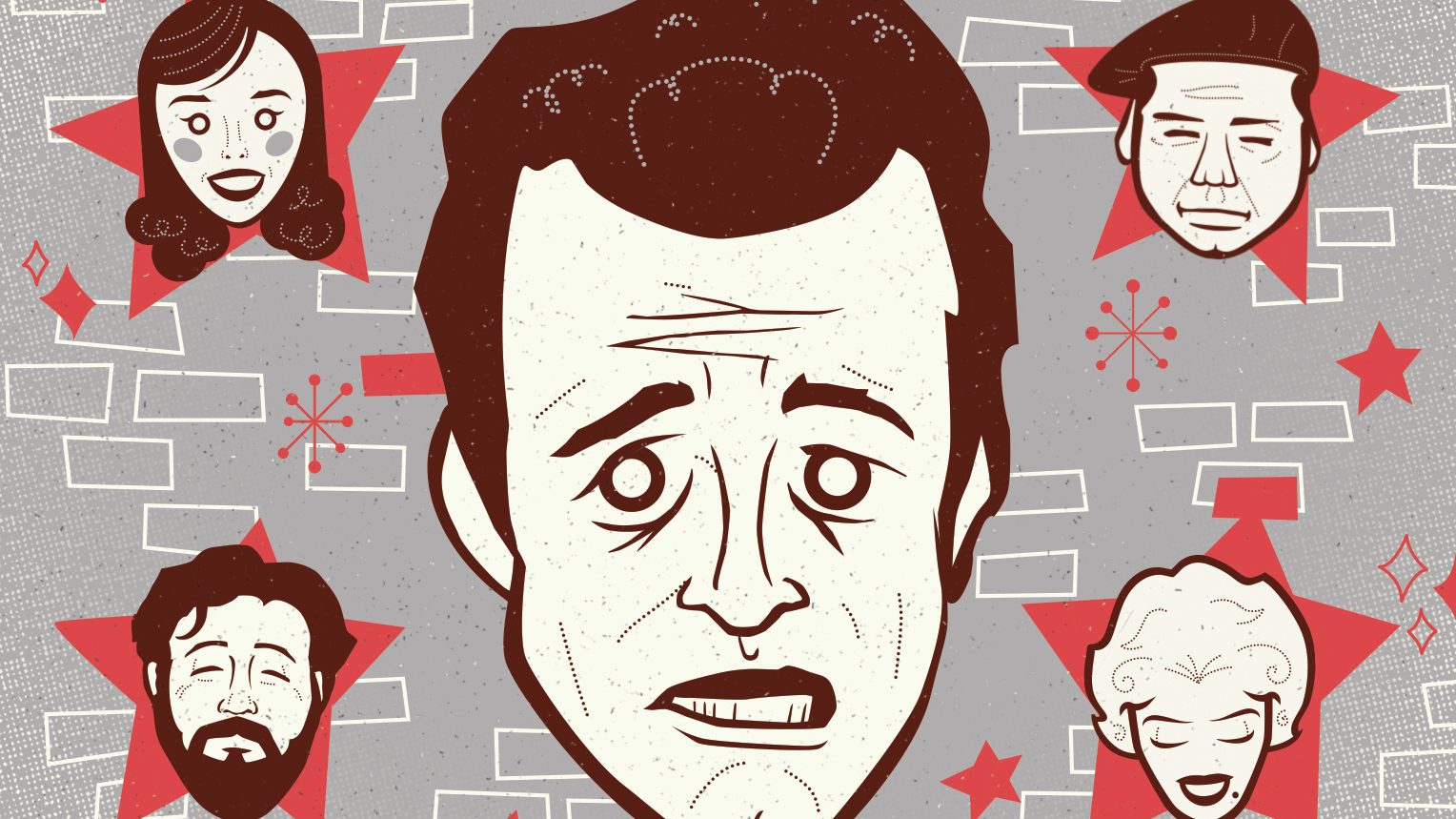 Olive Films pulls out all the stops for Roger Corman’s Horror Comedy A Bucket of Blood starring Dick Miller.

As much of a reputation that Producer-Director Roger Corman gets for being as crass with budgets as he was with his marketing, and development of his films that belies just how great of a filmmaker he was.  A Bucket of Blood is both a horror comedy and clever dissection of both Beatnik and Art World Culture.

Sad sack Waiter-cum-Artiste Walter (Dick Miller) works in the local Beatnik Café (called The Yellow Door) with dreams of being a sculptor.  The problem is that Walter is the butt of everyone’s jokes in the Café because he isn’t the sharpest tool in the shed.  After a moment of morbid and sociopathic inspiration Walter creates art from his murdering of a Cat.  Soon, the Beatniks and Art world are taken by storm by Walter’s deathly creations.  How soon will it be before someone figures out Walter’s secret?

Corman’s film seems to be the inspiration for everyone from the Coen Brothers to Terry Zwigoff to Daniel Clowes to Dan Gilroy.  A Bucket of Blood is definitely light on the blood (it was made in 1959 after all) but what it lacks in blood it makes up for in critiques of the Art world.  The film’s simple plot device of Walter Creates-Kills-Creates-Kills allows for long stretches of Beatniks discussing not only Walter’s art but the art world and creating in general.  The way that the script from Charles B. Griffith is able to never make fun of anyone but still show how up their own asses they are is one of the most delightful aspects of the film.

At the center of the film is Dick Miller’s Walter.  The early performance from the legendary Character Actor is pitch-perfect.  Miller’s dimwitted killer is never a character that feels particularly malicious but rather one that has no understanding of even the basics of life.  Walter walks from calamity to calamity without much of an understanding of what he’s done only that he doesn’t want to get caught.  Part of the delight of watching Miller is how beautifully constructed the innocent moron that Walter is.

A Bucket of Blood will delight any Dick Miller fan and those into Corman’s early AIP work.

Olive Films continues its of beautifully transferred forgotten classic and cult films.  Olive films have created a 4K Transfer from the original elements.  The results are gorgeous.  I’m betting that A Bucket of Blood never looked as good as it does here.  The black & white photography is luminous and perfectly rendered here.

The audio commentary by Elijah Drenner the director of the great documentary That Guy, Dick Miller. Drenner’s a great host/commentator on the track giving us about every piece of information that you could possibly want about Corman, Miller, the production, and a host of various other interesting anecdotes. Some include the history of the studio where the film was produced (now where the Henson Studio Resides), Miller’s life before teaming up with Corman, Jason Robards tough Miller before they were both famous, how A Bucket of Blood informed on Corman’s Poe adaptations, the importance of the name Walter Pasiley and how it informed directors like Joe Dante and Allan Arrkush, the discussion of the prologue that was created to make this a sequel of House of Wax, and much much more. Well, worth the listen.

“Creation is. All else is not” – Roger Corman on A Bucket of Blood is an all-new 8-minute interview with the legendary Director-Producer. Corman discusses how A Bucket of Blood came to be with total control and how he came up with the mixture of scares and hs. A happy accident by Corman’s own admission that formed the premise for the film. Some of the great anecdotes include how the film was made for $50k, and the research he and Chuck Griffith did.

“Call me Paisley” – Dick and Lainie Miller on A Bucket of Blood is an all-new 12-minute discussion between the couple. Beginning with a title card informing us they had been married since 1959. For any fan of Miller, this is a highly emotional interview. It took me a few times to get through it. More personal recollections than straight forward interview from the Millers. An amazing piece that any fan of Dick Miller will want to see this… be warned bring tissues.

The archival interview with Charles Griffith is about 21-minutes long. Played over a wood panel graphic the screenwriter discusses how he came to work with Roger Corman and then eventually discussing A Bucket Of Blood along with other projects.

“Bits of Buckets” – is a all-new 7-minute visual essay that compares the script to the final film. Using the Script pages, behind the scenes photos creates “deleted scenes” or “omitted” moments. The scenes are actually played out with voice actors. A great inventive feature.

Prologue – which is a 9-minute scene created to make this a sequel to House of Wax. It is an amazing piece of crass filmmaking to make an extra buck. The title cards before the prologue do warn since it was produced for the German Market it is German with English Subtitles.

Rounding out the features are an Essay by Caelum Vatnsdal on Dick Miller, the US trailer, the German Trailer, and a Still Gallery. The trailers are great just for comparatives as each are selling a completely different film. The still gallery as described in the menu screen runs about five minutes automatically and amounts to about 50 beautiful black & white photos. The photos can be paused on but not navigated through on your own unfortunately.

A Buck of Blood has been restored and brought to life by Olive Films.  Recommended!