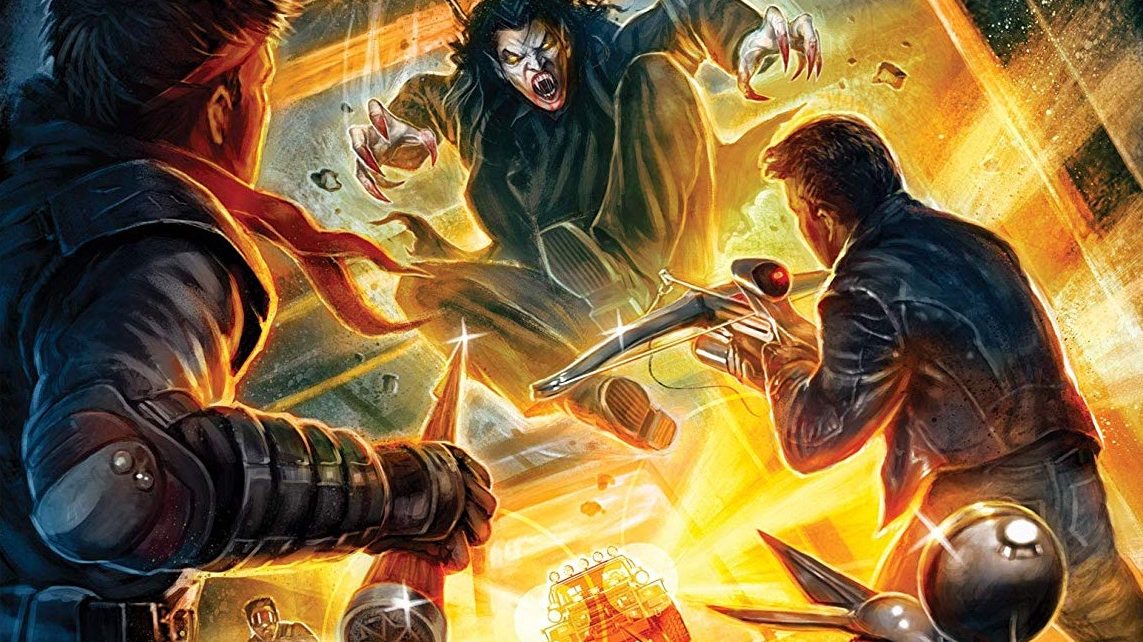 The last great John Carpenter Film finds its director in hueing as close as he ever would to a traditional Western in the vein of Hawks and Peckinpah.

Killing Vampires is a hard grinding to the bone shit job.  Someone has to do it though.  That someone is Jack Crow (James Woods) and his crew of Vatican sanctioned Vampire killers.  More Waste Disposal Unit than SWAT Team, Crow and his crew work hard and play hard.  It’s only after taking care of a particularly nasty nest of Vamps that our story starts proper with the awakening of Jan Valek (Thomas Ian Griffith) the master and possibly the original Vampire.  Having slaughtered, literally and figurative, Jack’s team… he’s out for revenge.  With a victim (Sheryl Lee), his best bud (Daniel Baldwin) and a new Priest (Tom Guinee), Jack is out to destroy Valek.

The film is by no means some sort of meditation on the life of a Vampire.  Vampires here are treated as disgusting vermin.  Any Navel Gazing Romanticism of Vampires is destroyed with as much gore-fill practical effects as the budget could muster. John Carpenter’s Vampires feels a kinship to Hawks’ Hitarai though these folks are definitely not “conservationist” but rather the most Blue Collar Exterminators that were ever Blue Collar Exterminators.  There’s a true sense of glee that Carpenter’s approaches all of this as though he is able to set ablaze years of Navel Gazing Romanticism of Vampires that he was sickened by.  The results are one of Carpenter’s bleakest and darkly humorous films, running right along with Carpenter’s They Live and The Thing.

It appears that Columbia has given Scream Factory the same beautiful transfer that was given to both Twilight Time and Indicator for their respective releases.  The Scream Factory edges out Twilight Time Disc.  The SF disc has a more pleasing picture to the eye with the Contrast and black level details given a slight uptick when compared side-by-side.  This is a matter of more modern compression tools giving us just a cleaner and better transfer.  An upgraded transfer for sure, albeit only slightly due to technological advances.

For those fans of Carpenter’s work as a composer, they have included an Isolated Score Track. Fans will want to purchase this disc alone for the entire score with no dialog or effects. The film is a surprisingly effective watch. This is after having seen the film three times already (twice, then once with the commentary track).

The audio commentary is from the 1999 DVD and Laserdisc release (which has been included on the Twilight Time and Indicator Series Blu-Ray Releases). This commentary finds Carpenter without someone to prompt him to discuss certain aspects of the production.  The result is the director mainly describes what’s on-screen only giving the occasional production anecdote.  It’s a decent commentary but not one of the truly great Carpenter Commentaries; all the same it’s great to have it included on the disc.

Time To Kill Some Vampires is a 12-minute all-new interview with John Carpenter, Sandy King Carpenter, and Cinematographer Garry Kibbe. Beginning with the origins Largo, Carpenter discusses how he came onto the project and how it was made. Sandy King Carpenter discusses the approach to Vampires. Some of the great tidbits include why they shot in New Mexico, how they came about casting James Woods and all that comes with casting him, Carpenter’s relation with Woods, casting Daniel Baldwin, Thomas Ian Griffith and the strange bit of casting fame about with the first interaction with King Carpenter. The best is they give details on what a sequel that Carpenter wanted to do (not what ended up being produced). All in all a great informative interview.

Jack the Vampires Slayer is an all-new 22-minute interview with James Woods. Thankfully, Woods does not talks Politics but rather everything about being cast. The actor definitely is passionate about the film and the role he was cast against type. Woods has nothing but affection for not only John Carpenter but for the film and action films in general. Woods actually discusses in detail the production in all its shades. Even the actor discusses his rep as a difficult actor and a story that betrays his rep though also confirms it. The explosion scene is discussed in detail. Also discusses a possible alternate ending. He even manages to make a Weekend at Bernie’s joking reference.

The First Vampire is an all-new 9-minute interview with Thomas Ian Griffith. Beginning with the confirmation of King-Carpenter’s story of casting him as Valek. Some of the great details discussed include having to get extensions and the trouble with the said extensions later in the production.

Raising the Stakes is an all-new 10-minute interview with Greg Nicotero. Beginning with Carpenter discussing his relationship with Nicotero the interview goes into detail about the make-up FX that KNB handled. The interview is worth a watch for the continuity photos they’ve inserted.

Padre is an all-new 13-minute interview with Tim Guinee. Discussing the character and the one with an arc, which is the truth. Guinee discusses the fond memories of the production and working with both Woods and Carpenter. Ironically, he discusses his role in Blade which productions ran concurrently. The story he tells about James Woods is an all-timer.

The Behind-the-Scenes featurette is possible the best feature of the disc. This vintage featurette runs 23-minutes long and is actually multiple parts.

The main behind the scene is about 6-minutes. The rest are extended interviews that are found in the main feature. The best part is the B-roll footage that they’ve included. It’s 8-minutes of the crew filming various sections of the film. Much like other Scream Factory titles, this is a goldmine for fans of Carpenter and this film. It definitely shows Woods, Carpenter, Baldwin, Sheryl Lee, and crew working things out inset. One of the best moments is them actually showing the on-set practical burning effect and how it was created. A great feature that’s buried in the set. One would definitely miss this if not looking. But well worth your time.

Rounding out the special features is a Theatrical Trailer, TV Spots, and a Still Gallery. I still remember this 2-minute trailer as I ran it as a projectionist at least 200 times and I still love it. Cheesy machismo overwrought ridiculousness complete with a Marilynn Manson song. The 5 TV Spots that each run about 60-seconds and are interesting bc of how they’re stylistically only slightly different. But the best part is they give us a JAPANESE TV SPOT (which to be honest feels like a 90 movie trailer) and it’s better than any of the US cut trailers or TV Spots. The Still Gallery is filled with everything from publicity stills, behind the scenes photos, lobby cards, Press kit photos, Various Posters from different countries. The Gallery chock full of great looks at the film and should not be slept on.

Scream Factory delivers the goods on their release of John Carpenter’s Vampires.  A wealth of new extras along with some great archival featurettes makes this a “Can’t-miss Blu-Ray”.  HIGHEST POSSIBLE RECOMMENDATIONS!!!