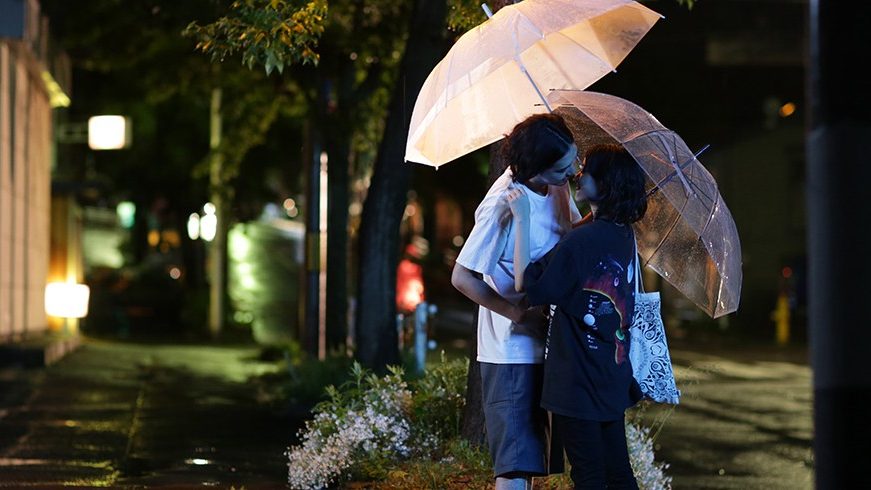 Some films lack a strong narrative through-line by design. The story is a series of seemingly random events that slowly reveal the layers of the characters congregating on screen. And Your Bird Can Sing, the new film from writer-director Sho Miyake based on the novel by Yasushi Sato, is just such a “hangout film”. If Richard Linklater had come of age in 21st century Japan, this is what Dazed and Confused might have looked like.

And Your Bird Can Sing focuses on a trio of central characters. Our unnamed protagonist (Tasuku Emoto) works at a bookstore with Sachiko (Shizuka Ishibashi). They flirt with one another and text from opposite ends of the store as they pretend to work. He lives with a younger roommate named Shizuo (Shota Sometani). The three drink all night and stumble into work to earn enough money to pay for the next party.

They have no long-term plans for their lives. They’re focused solely on momentary pleasures. Financial success is earning just enough to enjoy yourself while avoiding any true responsibilities. In their minds, it’s like the Dave Matthews’ song says, “In the end it all piles up so tall into one big nothing, one big nothing at all.” So, if success ultimately amounts to nothing, why chase it?

Is it a love triangle? Or is it a friendship triangle? It depends on who you ask and when you ask them. Our unidentified millennial is indifferently engaged in a sexual relationship with Sachiko. But what is the status of Sachiko and Shizuo? It’s as if the two roommates form one complete man. Sachiko satisfies her intellect and need to talk and share her emotions with Shizuo while feeding her sexual desires with his quiet, often sullen, roommate.

Our unnamed protagonist is the embodiment of the knock on millennials as a generation: he’s so casual that he doesn’t appear to care about anything. When there’s a controversy at work with another employee, he volunteers to be fired rather than accept any responsibility for the incident that transpired. At one point Sachiko tells Shizuo that she often doesn’t know what his roommate is thinking, and the young man replies: “Because he’s really not thinking anything.”

It’s an interesting philosophical question: If you are truly worried about nothing, then are you personally invested in anything that actually matters? As the film goes on, we can tell that Sachiko wants our protagonist to object to her growing relationship with Shizuo. She wants to matter to him. His cool, casual indifference acts begins to repel Sachiko when it once attracted her.

And Your Bird Can Sing poses many questions, and not all of them are answered during its 100-minute run-time. But, that’s not the point of the film. It drops you into the world of its characters and asks you to hang out with them for a few weeks of their lives. You’re not asked to judge them. You’re asked to experience what they experience and form your own opinion about their millennial existences. It’s an intriguing film, and one of the better ones that screened at the 2019 Fantasia International Film Festival.

1 comment on “And Your Bird Can Sing: Fantasia 2019 Film Review”